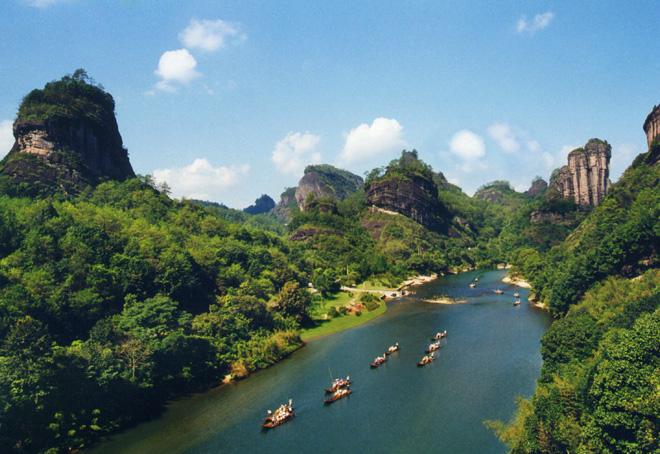 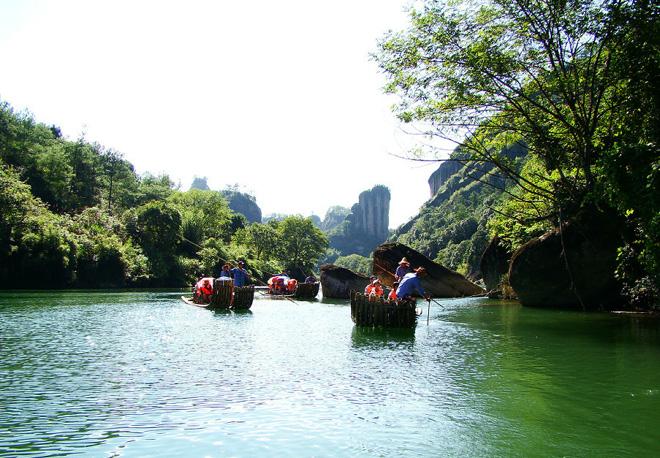 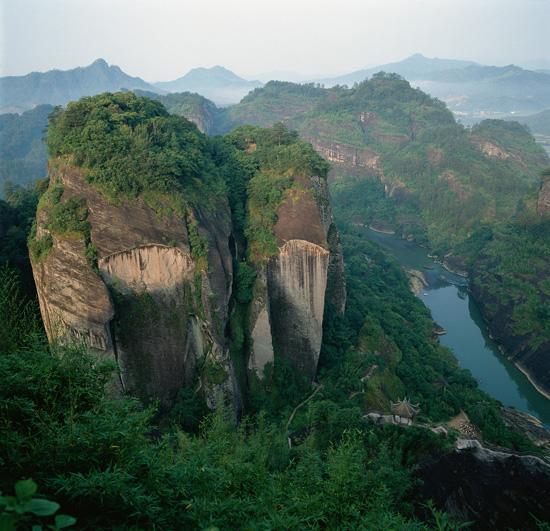 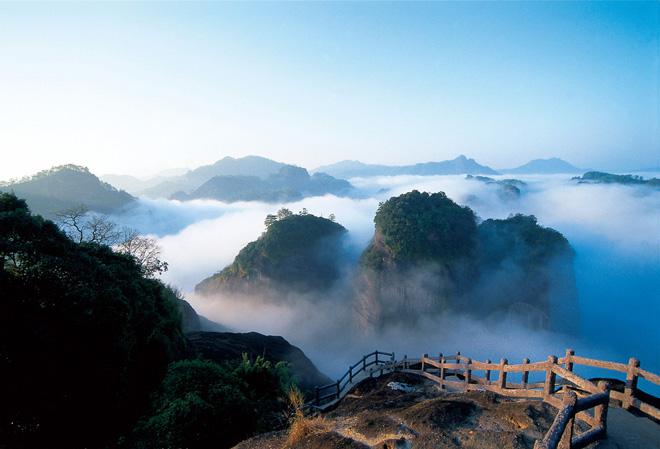 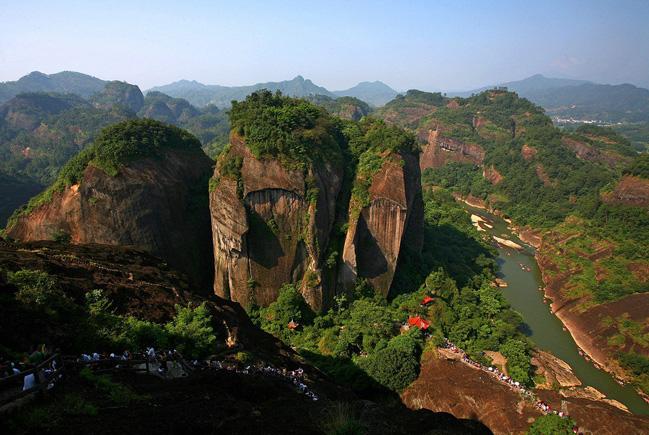 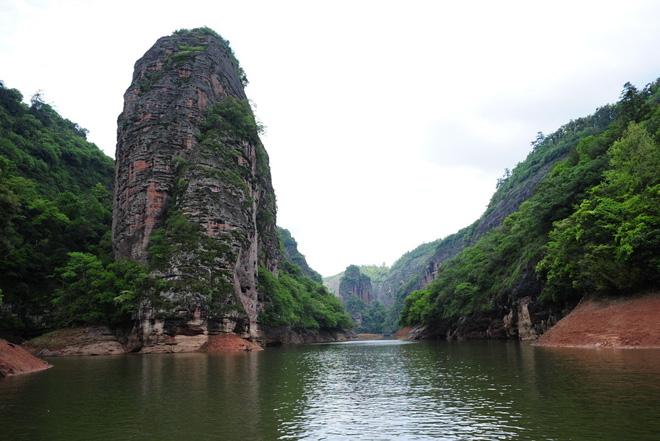 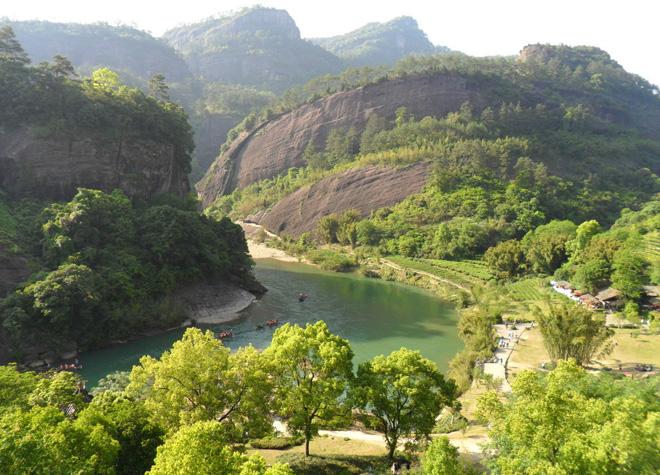 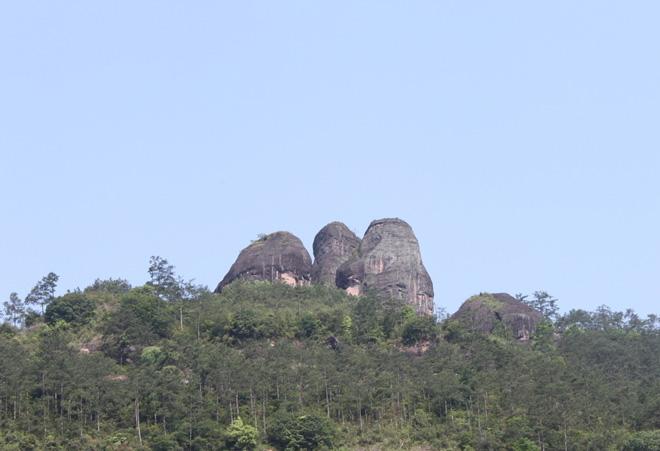 Chinese name: 武夷山 (Wu Yi Shan) Location: In Xingxun Town, Wuyishan City, Fujian Province. Opening time: 08:00-17:00. Ticket: --- CNY140 (one-day tour), CNY150 (two-day tour), CNY160 (three-day tour) for main scenic spots (including Cloud Nest-Tianyou Peak scenic area, Wuyi Palace scenic area, One-line-sky and Roaring Tiger scenic area, Water-curtain Cave and Da Hong Pao scenic area, Lotus Peak and Yulin Pavilion scenic area). --- CNY80 for Wuyi Mountain National Nature Reserve (including Huanggang Peak, Nature Museum and so forth). ---Extra ticket for other scenic spots. How to get there: ---A taxi from Wuyishan Airport to resort district (facing the Wuyi Mountain Scenic Area across the Chongyang Stream) is around CNY30. ---Take a direct train from Fuzhou, Xiamen, or Quanzhou to Wuyishan City; or take a train to Shangrao city or Shaowu city and continue by a direct bus to Wuyishan City. ---The scenic area is about 15 km from Wuyishan City. There are many minibuses between Wuyishan City and Xingcun Village. You can ask one to pick you up (within CNY5). ---Bus No.6 shuttles between the Wuyishan airport, train station and resort district. Best time to visit: from June to September. 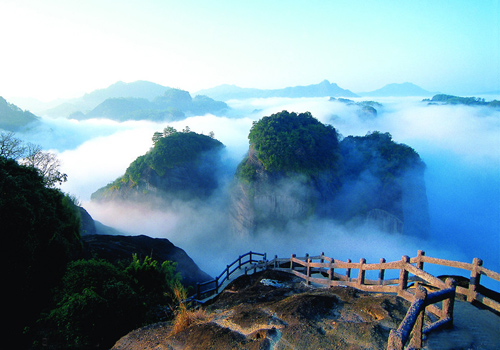 Located at the northwest of Fujian Province in east China, the Mount Wuyi was listed as a natural and cultural world heritage in 1999. It is known as ''the most beautiful mountain in southeast China''. Its main peak, the Huanggang Peak, rises 2158 meters above sea level, being the highest peak in southeast China. With the best preserved and largest tropical primeval forest in central Asia, Mount Wuyi is the most important biodiversity conservation zone. In 1987, the Mount Wuyi Nature Reserve was listed as a ''Global Man and Biosphere'' by UNESCO, and in 1992, the Global Biodiversity Protected Zone. 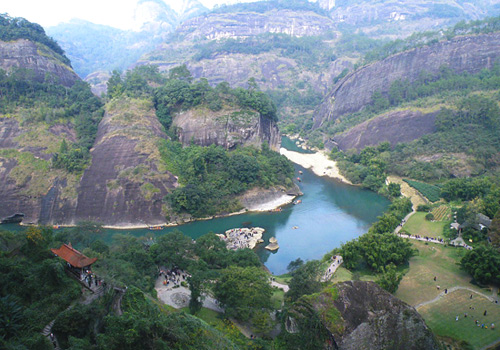 The Nine Bend Stream flows from the north foot of Huanggang Peak. It snakes through 36 mountains and 99 cliffs that are distributed on the bank of the stream. It runs for 62.8 km from west to east through Mount Wuyi and girdled by mountains into nine bends. Nine Bend Stream is the soul of Mount Wuyi with the most charming scenery. Superior climate and environment give birth to the wonderful scene of ''trees growing out of rocks''. Drifting on the Nine Bend Stream, you probably lose yourself!

The Tianyou Peak (Heaven Tour Peak) is located in the center of Mount Wuyi. It outshines neighboring peaks with mists and clouds. Embraced by mountains and Nine Bend Steam on three sides, it offers a panoramic view of Mount Wuyi. White clouds undulate on the mountain like big waves of the sea, making the area just like a fairytale wonderland.

The Great King Peak is also called Heavenly Pillar Peak and Gauze Cap Peak. It looks like an official's hat. Located on the west of Wannian Palace, it is the first peak for entering Mount Wuyi. On the mountain top there are many old towering trees and many caves. The Tianjian Pond has clear water all the year around. Only a narrow path on its south side enables tourists to ascend to the top. 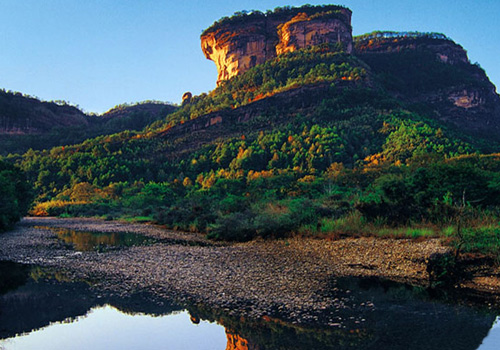 Water-curtain Cave is the largest cave in Wuyi Mountain Scenic Area. Different from a karst cave, it was formed because the incompetent bed was eroded and sunken by the force of flowing water. The cave is spacious and can receive one thousand visitors. The cave is fronted by a waterfall which looks just like a white curtain. In addition, the relics and ruins of temples and cliff carvings can be found inside the cave.

Wuyi Palace is the main entrance of Wuyi Mountain Scenic Area. It is the oldest Taoist temple in Mount Wuyi. Originally built in Tang Dynasty (618-907), it was expanded into 300 rooms in Song Dynasty. Wuyi Palace was grandiose because it was where emperors offered sacrifice to mountain god. But due to wars and fires, only the Wannian Palace, Sanqing Palace and two wells are survived. Wannian Palace is now the memorial hall of Zhu Xi, a Song dynasty philosopher and the founder of Idealism Confucian. Inside the palace there are two cassia trees of one thousand years old. Sanqing Palace is the location of International Lanting College with precious stone inscriptions. 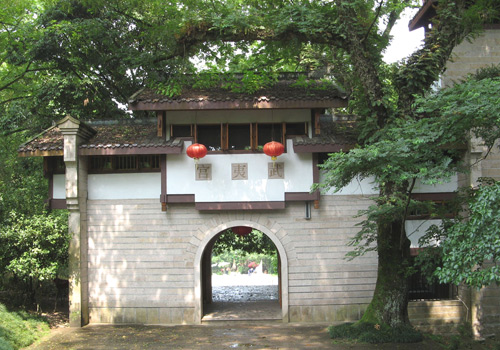 Roaring Tiger Peak and Tianyou Peak are said to be two ''walls'' of Wuyi Mountain. Located on the south side of the second bend of Nine Bend Stream, the Roaring Tiger Peak is flanked by abrupt cliffs on four sides. The area is known for its sea of clouds, grotesque rocks, steep cliffs and abundant springs. The Roaring Tiger Scenic Area provides different landscapes in four seasons.

The One-line-sky is also called Ling Cave. Located on the southwest end of Mount Wuyi, it is the most mysterious cave in the area. The cave is split into two parts, as if being cut through by an axe. Standing beneath of the cave and looking up, you will see a narrow sky.

The Longchuan Grand Canyon is situated within the Wuyi Mountain Nature Reserve Area. Here you will see green mountains, colorful blossoms, rare animals, especially, springs and waterfalls. Ancient trees soar up to sky and white waterfalls flow down along jagged rocks and reflected into colorful halos by red sandstones.

This scenic area is located on the center of Wuyi Mountain, inside the jiulong Nest Grand Canyon. A deep valley was enclosed by lofty and steep cliffs on four sides. The world-renowned Da Hong Pao (a kind of oolong tea of Mount Wuyi) grows out of the cliffs and bottom of the canyon. Six ancient Da Hong Pao tea trees stand tall and straight with luxuriant leaves. They are more than 340 years old. Da hong Pao is hailed as the king of tea due to its color, aroma and taste. The scenic area also includes some other precious tea trees, Nine Dragon Cave, Yuzhu Peak, Liuxiang Brook, and some cliff carvings.