Wuwei City covers an area of 33,249 square kilometers and is situated at the middle of Gansu Province and the north part of the Hexi Corridor, bordering Lanzhou in the east, Jinchang in the west, Qilian Mountain in the south and Tengger Desert in the north. The downtown area of Weiwu is in the east of the Hexi Corridor as part of the Silk Road of ancient China. With a history of more than 2,000 years, Wuwei was called Liangzhou in ancient times where the capital of Qianliang, Houliang, Nanliang, Beiliang during the Sixteen Dynasties and Daliang in Early Tang Dynasty were set. In history, Wuwei City is an important city where the Central China and West Regions communicated frequently, a strategic pass of the Silk Road and the Buddhism center of North China. The renowned poetry, song and instrument on Liangzhou were formed and developed here. Its cultural relics include Wong Niangniang archaeological site, bronze bells in Dayun Temple of Tang Dynasty, Haizang Temple, Luoshi Temple, Confucius Temple of Wuwei, Bell Tower, Leitai Temple and steles. There are many rivers and natural solid reservoirs-the ices of Qilian Mountain formed by permanent snow on the high mountains.

As early as more than 5,000 years ago, human activities appeared in this area. The name of the city means  mighty and powerful, which was called to praise the achivements of Huo Qubing, a general who defeat the Xiongnu Ethnic Group. The capital of Qianliang, Houliang, Nanliang, Beiliang during the Sixteen Dynasties and Daliang in Early Tang Dynasty were set here. For its long history, splendid cultures have been formed, such as the Wuliang Culture, Xixia Culture, Buddhism Culture and Regional Culture. As much as 543 cultural units have been discovered, including five national key cultural units, 58 provincial cultural units. Besides, three heritage collections are involved in the 47,000 cultural collections. The most outstanding ones are: a horse (Bronze Horse), a stele (Xixia Stele), a temple (Baita Temple), a grotto (Tiantishan or Tianti Mountain Grotto) and a temple (Confucius Temple). The Bronze Horse, praised as the highest peak of classical artworks, has become the Chinese traveling graph sign;  Xixia Stele is an unmatched precious trasure and the rare material to study the history of Xixia; Baima Tower is the place where Prince Kuo Duan of Yuan Dynasty and the Buddhist leader held the Liangzhou Meeting and the historic witness of the Tibet’s being part of China; As an outstanding grotto of early China, Tiantishan Grotto is called the primogenitor of Chinese grotto; Luoshi Temple is the place that Mage Jiumoluoshi expounded the texts of Buddhism. Confucius Temple of Wuwei is one of the Confucius temples in China with a large scale. In addition, the natural landscapes such as snowy highlands, oasis sceneries and deserts and its history and culture enhance each other’s beauty, both of high cultural and tourist value. 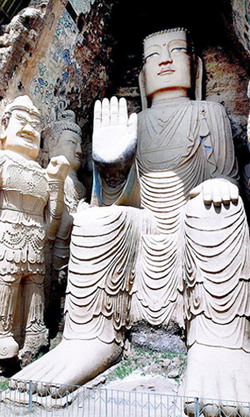 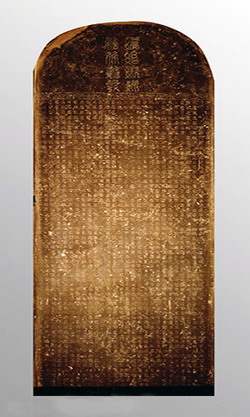 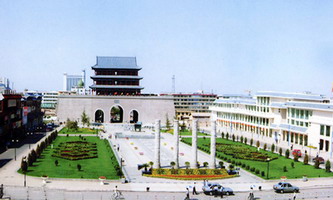