11 Days Yangtze Cruise and Tour to Beijing, Xi'an and Guilin 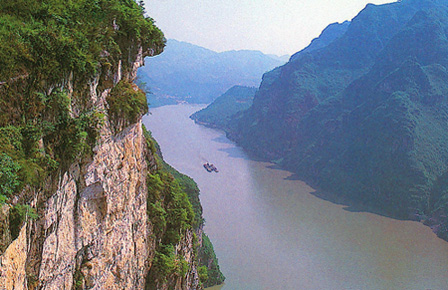 Transfer via: by air United Airlines 851 at 15:15PM arrival in Beijing-own arrangement  Program: Arrive in Beijing, you will be met and transferred to hotel, free at the rest of the day

Program: Full day visit the Badaling Great Wall, The Ding Tomb, The Sacred Road, On the way back to hotel, you will be driven to visit the main 2008 Beijing Olympic venues, take an exterior visit of both the Beijing National Stadium (Bird's Nest/Olympic Stadium), National Swimming Centre ('The Water Cube'), Beijing, feel free to take some photos of the stadiums. In the evening, you will be transferred to the Lao She Tea House which we have reserved well for you, you can pay cash there

Program: You will arrange on your own

Transfer via: HU7882    1715-1900 arranged by us  Program: Visit Hutongs by rickshaw, the Summer Palace, then be transferred to airport for Xi'an. Arrive in Xi'an, you will be met and transferred to hotel

Transfer via: FM9329   1520-1705 arranged by us Program: Visit the Ancient City Wall, the Great Mosque of Xi'an, History Museum in Xi'an, then be transferred to airport for Guilin. Arrive in Guilin, be met and transferred to hotel

-The Ancient City Wall: It is the largest and best preserved present city wall in ancient China and is probably the best military battlement in the world.
-The Great Mosque of Xi'an: It is the largest and best preserved of the early mosques of China. And it was built primarily in the Ming Dynasty when Chinese architectural elements were synthesized into mosque architecture.
-History Museum in Xi'an: It is a magnificent architectural complex in the Tang Dynasty style. The Museum possesses a treasure of 113,000 historic and cultural artifacts unearthed in Shaanxi, and it covers an area of 1,100 square meters for exhibition.

-Li River Cruise: Depart from your hotel in the morning. Be transferred to the Zhujiang Pier (about 1 hour drive) for a 4.5 hours wonderful cruise. You will enjoy the picturesque mountains, peaceful green fields, farms and villages with water buffalos, cows wondering around on both sides of the river bank. Disembark at the one-thousand-year-old town Yangshuo in the afternoon. Have a short exploration to the old town before to be transferred back to Guilin city.
-West Street: West Street is the oldest street in Yangshuo with a history of more than 1,400 years. Situated at the center of Yangshuo County, West Street has become, since the 1980's, a window of eastern and western culture and the biggest 'foreign language center' in China.
-Big Banyan: 6 kilometers away from the County of Yangshuo, you will find a prominent and towering tree: the Big Banyan Tree. It has survived wind and rain over centuries since it was planted during the Sui Dynasty (581-618).
-The Moon Hill: 50 minutes' bike from Yangshuo, there lies the Moon Hill. Named for the crescent shaped cave running through the moon, Moon Hill is one of the highlights in Yangshuo.

Transfer via: HU6212   1950-2055 arranged by us  Program: In the morning, drive back to Guilin, visit Elephant Trunk Hill, Seven Star Park, Reed Flute Cave, and then be transferred to airport for Chongqing. Arrive in Chongqing, be met and transferred to the dock. Board the ship from 17:00 to 24:00 and the ship will depart Chongqing at second early morning

(13:00) Disembark at Yichang, be met at the dock and transferred to airport for Beijing. Arrive in Beijing, you will arrange by yourselves.