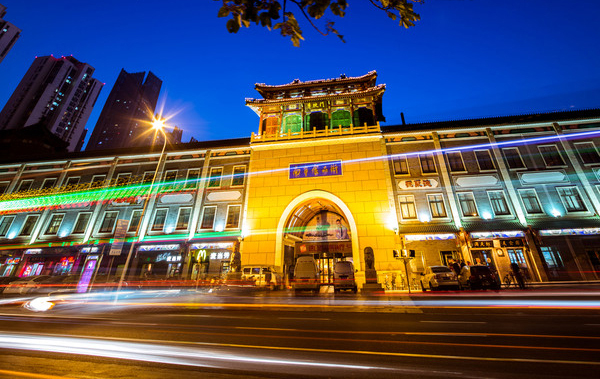 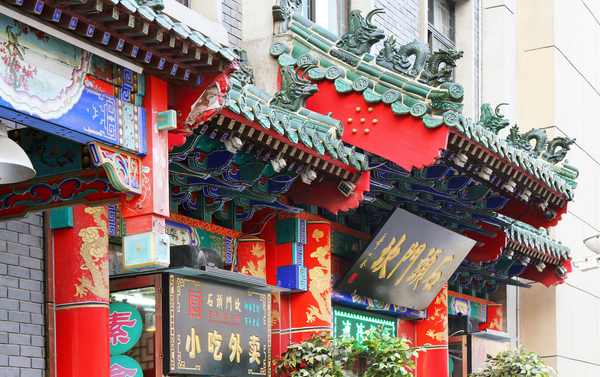 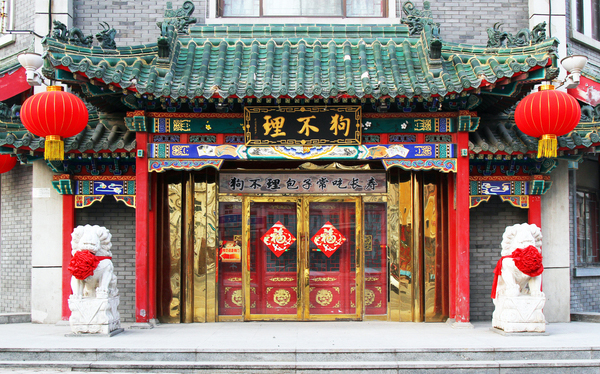 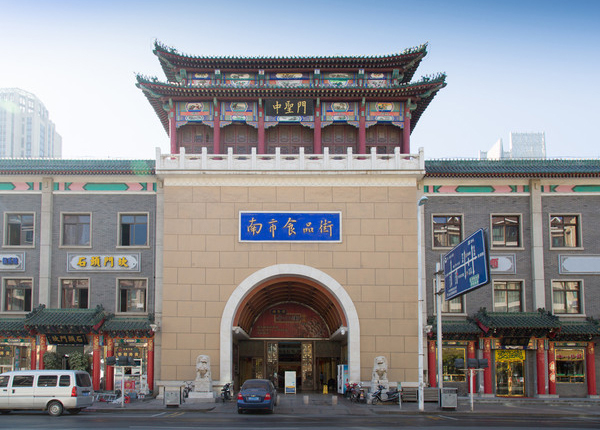 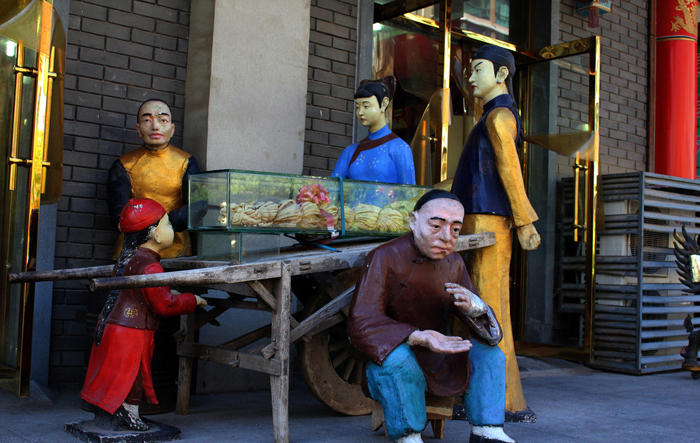 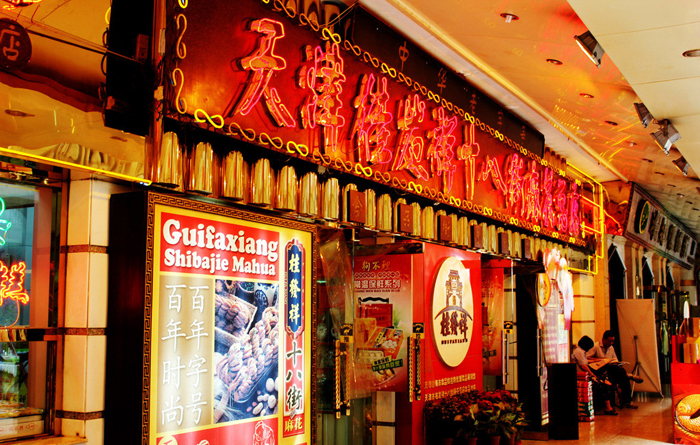 Completed within 100 days in 1984 and opened at the beginning of 1985, the Tianjin Nanshi Food Mall where a variety of food shops converge is a quadrate divided into four quarters by a decussation with arc glass roof, surrounded by a several meters high wall with four gates of Qing Dynasty style, namely, the south Zhenyu Gate (振羽门), the west Xingge Gate (兴歌门), the north Zhongsheng Gate (中圣门) and the east Huayu Gate (华腴门), the first Chinese characters of which form the Chinese phrase “振兴中华 (Revitalize China)”. Every day this palace-like food mall is always bustling and colorfully decorated lanterns make the streets blazing with light when the night falls. 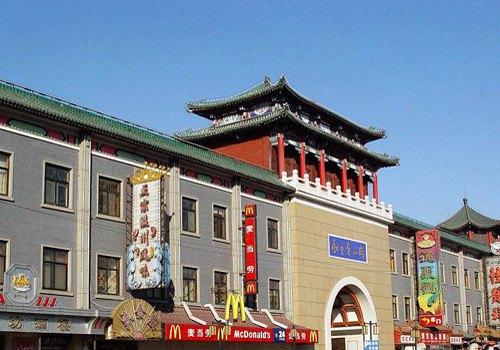 Along the streets of the food mall three-storey buildings can be seen, the second floor of which is connected by an ambulatory, creating an interconnected way to integrate the quarters. It is on the first floor to meet snacks and cuisines from all corners of the country. So far, there are over 100 food shops and restaurants offering nice delicacies in the Nanshi Food Mall. From Tianjin local snacks, Beijing roast duck, Guangdong sea food, Sichuan hotpot, Muslim food, old Chinese royal recipe…to western food such as Italian and Russian dishes, it is usually hard for visitors to decide which ones to eat. 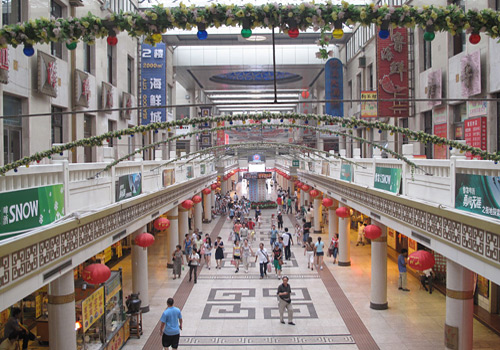 Being the biggest food mall in China and selected as one of the “TopTen Tianjing Attractions” in 1989, not only does Tianjin Food Mall provide with food but also it gathers recreational ways such as shopping, sightseeing, entertainment, culture and architecture appreciating.

Some Famous Food and Shops in Tianjin Nanshi Food Mall 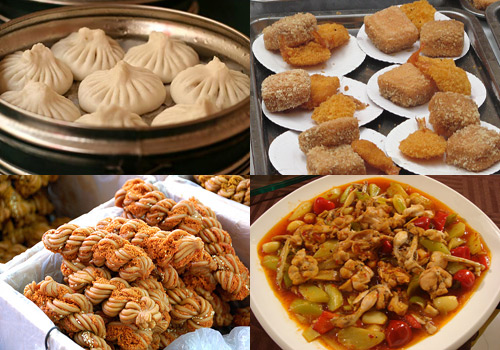 The “Three Unique Snacks of Tianjin”, namely, Goubuli steamed stuffed bun (狗不理包子), Erduoyan fried cake (耳朵眼炸糕) and Chinese doughnut (麻花), are always the most famous Tianjin snacks that catch hold of visitors’ stomach tight, and many visitors are willing to wait for them in spite of a long queue. Besides, the bean snacks of Beng Dou Zhang (founded at the beginning of 19th century) and the nutlet snacks of Guo Ren Zhang (founded at the second half of 19th century) are very popular as well. As follow are some of the famous food shops in the food mall:

- Ma’s Gruel of Millet Flour and Sugar (马记茶汤): It became more famous with the broadcast of the TV play “The Big Teapot of Dragon Mouth” and many Chinese domestic visitors come to it for both the mouthwatering gruel and the acrobatic water filling skill of the master.

- Xianheng Hotel (咸亨酒店): The name of the hotel getting famous in one of the novels of Lu Xun (鲁迅) is from Shaoxing, the hometown of this renowned Chinese writer. Decorated with a traditional plaque and antithetical couplet, this hotel diffuses full-bodied local sense of Shaoxing and reminds visitors of its mellow wine and tender fish dish. 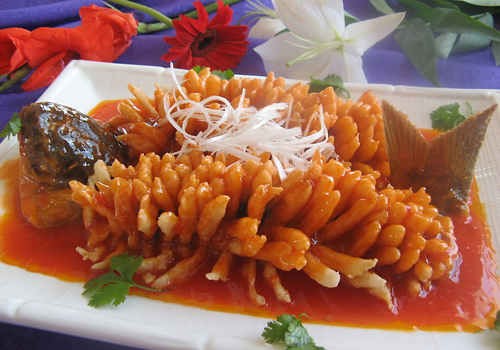 - Deyue Building (得月楼): It is a Suzhou restaurant proud of its specialties such as “Deyue Chicken” and “Squirrel-shaped Yellow Croaker”.

- Huanlin Wineshop (华林酒家): This is a Shandong restaurant known as delicious dishes and warmhearted service.

The Nanshi Hotel Street near the Tianjin Nanshi Food Mall

Walk out of the west Xingge Gate of the mall, the Nanshi Hotel Street - an imitated architectural complex of Qing Dynasty (1644-1912) - will come into sight. This special street is made up of the south, the north and the arcade buildings. The street possesses underground parking lot, store room as well as exhibition hall; the first floor is equipped with a grand dining hall that can hold 600 people; and from the second to the fifth floor well-equipped guest rooms with over 1400 rooms, 2 main meeting rooms and 8 small meeting rooms are set up.