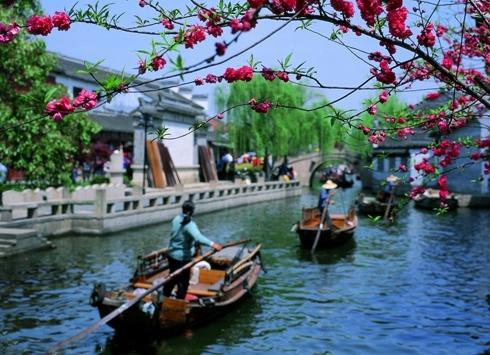 There are no civil Airports in Suzhou, so visitors have to reach the city by way of Shanghai Hongqiao International Airport, Shanghai Pudong International Airport and Wuxi Shuofang Airport in Jiangsu province. Airport shuttle buses are frequently running between the airports and Suzhou, and to some extent, it is quite convenient though lack of its own civil airport.

For your information, if you are decided to take shuttle buses from Suzhou to Shanghai Hongqiao International Airport, you are advised to book the ticket before hand. The first bus runs at 6:20 in the morning and stops at 15:30.

It takes visitors about one hour to get to Suzhou with one-way ticket 30 yuan. Visitors can get on the bus at the No.115 West Ganjiang Road (干将西路115号) in Suzhou or thirty metres away from the right of the exit of Wuxi Shuofang Airport. The bus begins to run from Suzhou at 6:15 and stops at 18:10, while it runs from Wuxi at 10:30 and stops at 20:20.

Suzhou railway station is located on the north bank of the mote in the north of Suzhou city, that is, on the No.27 Chezhan Road, Pingjiang District (平江区车站路27号), Suzhou city. Almost all trains of the Beijing-Shanghai railway will stop here except through trains. Generally speaking, trains run between Suzhou and Shanghai every 20 minutes, but during the Tomb-Sweeping Day the bus will increase. It will take visitors about thirty minutes to ninety minutes to cover the distance.

It is sited at the intersection of Yinchun Road, South Road, South Loop (南环东路迎春路口). Buses to Changshu, Kunshan, Shengze run every twenty minutes, to Hangzhou, Zangjiagang, Wuxi, Zhenjiang, Tongli, Nanxun, Huzhou, Jiaxing every thirty minutes. Minibuses to towns and villages in Wujiang are also available here. Coaches bound to Zhejiang province depart from the South Station, too. Besides, express buses to Nanjing are within reach.

It is located on the No.10 Guangjian Road, Wuzhong District (吴中开发区广建路10号), and travelling special line buses bound for Luzhi run every twenty minutes from 7:00 to 18:00, for Tongli from 6:40 to 17:15, Zhouzhuang from 7:00 to 17:00. A few coaches depart from here to Zhejiang province and the north of Suzhou.

For your information, ticket prices range from 26 yuan to 30 yuan if you decide to make a trip to Shanghai from the North Bus Station.

Tourist cruises are Grand Canal Cruise and Suzhou ancient city moat. The Beijing-Hangzhou Grand Canal Cruise departs at 17:30 in the afternoon, and arrives in Suzhou at 07:00 the next morning. Reaching the pier of Qiaotuku Canal, Panxu Road travellers can have a good time on boat to enjoy the city moat.

Bicycle – due to the concentration of the scenic spots in Suzhou, travellers can choose bicycles to discover the lovely city. Around the Pingmen Bridge which is on the east of railway station, many leasing companies are in sight. After showing your ID card and paying guarantee deposits 100 yuan to 200 yuan, you can rent the bicycle immediately. Generally, 2 yuan for 4 hours, 3 yuan for 5 or 6 hours, 5 yuan for a whole day.

Taxi – pricing starts at 10RMB (including 3 km), 3 kilometers after additional 1.8 RMB for one kilometer, and 5 kilometers after, 50% no-occupancy surcharge. Waiting for more than 5 minutes, the driver has to charge you by converting 5 minutes into 1 kilometer. Extra fees have to pay if you take taxi from 23:00 to 5:00.

Travelling Special Line Bus – it can take you the almost all scenic spots in Suzhou. There are five lines in total.

Rickshaw – when buses can not bring you to some scenic spots, it is fantastic to reach them by rickshaw, starting price being 2 yuan, after 1 kilometer after additional 2 RMB for one kilometer.