Shigatse, literally means "a manor with fertile water and soil" in Tibetan language, is certainly a beautiful place with idyllic scenery- lush meadows, verdant terraced fields and agminate flocks and herds. Just seated at the confluence of Yarlung Zangbo River and its main tributary Nyang Chu River in the southwest of Tibet, some 300 kilometers from Tibet capital city Lhasa, Shigatse is the second largest city in Tibet with an average altitude of 3836 meters. It neighbors Ngari in the west, Nagqu in the north, Lhasa and Lhokha in the east, borders on the countries of Nepal and the Kingdom of Bhutan, and can reaches the highest peak in the world Mount Everest in the south. An ancient city with a history of more than 600 years, Shigatse was inscribed as a national historic and cultural city in 1986 and administrats 1 county-level city of the same name, 17 counties and 1 port. Shigatse and its surroundings enjoy sufficient sunlight all year round, and with its plain-centered terrain, the agriculture is quiet developed and has earned it a fame as "A Granary of Tibet".

History of Shigatse - the political, religious and cultural center of U-Tsang as well as the station of successive Panchen Lamas 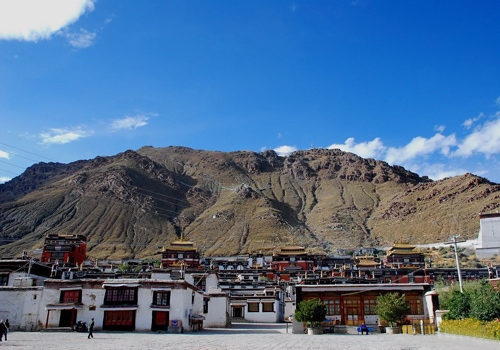 In the history, the whole area of Tibet was divided into three parts, Front Tibet, Back Tibet and Ngari , the first of which was the territory under Dalai Lama’s control mainly including present Lhasa and Lhokha, while the second of which, also called Tsang, was the territory under Panchen Lama’s control referring to today’s Shigatse Prefecture. A place with best soil texture literally, Shigatse was a time-honored city, serving as the political, religious and cultureal center of U-Tsang as well as the station of successive Panchen Lamas. It has a profound religious culture with a great many of renowned Buddhism monasteries of different sects, such as the Tashilhunpo Monastery, Sakya Monastery, Palkor Monastery, Shalu Monastery, etc. which are also the holy temples of art.

By virtue of ancient culture, magnificent monastery architecture, splendid natural landscape and predominant geographic location, Shigatse today is one of the most attractive destinations in Tibet for travelers from both domestic and overseas. It has imposing glaciers and snow peaks represented by the No.1 peak Mt. Everest, one of the three holy lakes, Yangdork Lake which is inlaid in mountains, the symbol of Shigatse, Tashilhunpo Monastery which is the station of successive Panchen Lamas and was spectacularly built down the mountain hill, and the Palkor Monastery with exquisite murals and multitudinous pagodas which are crowned as "the king of Buddhism pagodas in Tibet". Here is also a world of color, the white of snow, the green of mountain forest, the kelly of the grass, and the red of the plateau flowers constitute a multicolored Shigatse. The picturesque river valley landscape, sacred mountains, holy lakes, mysterious ancient temples and distinctive Tibetan folklores in Shigatse always leave a deep impression and will lingering in people’ minds after their visit.