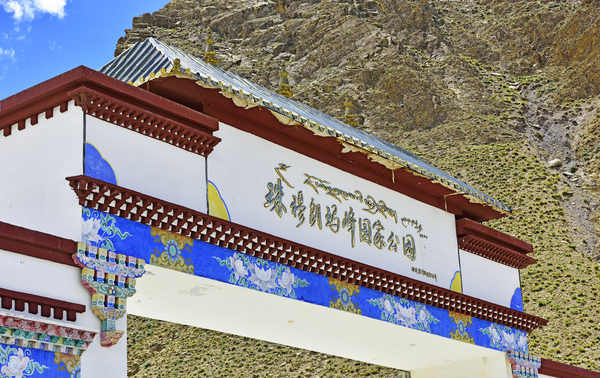 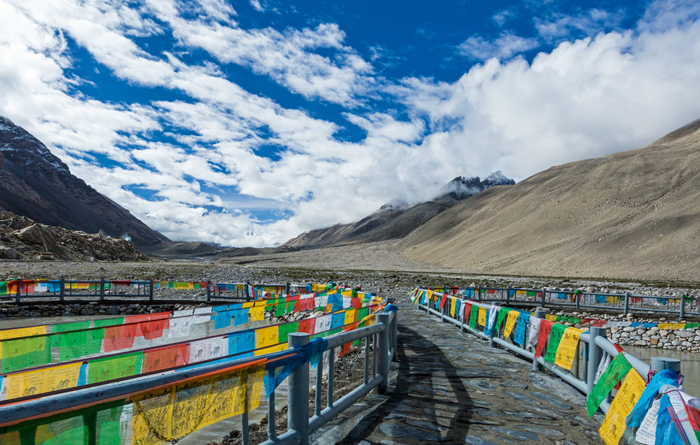 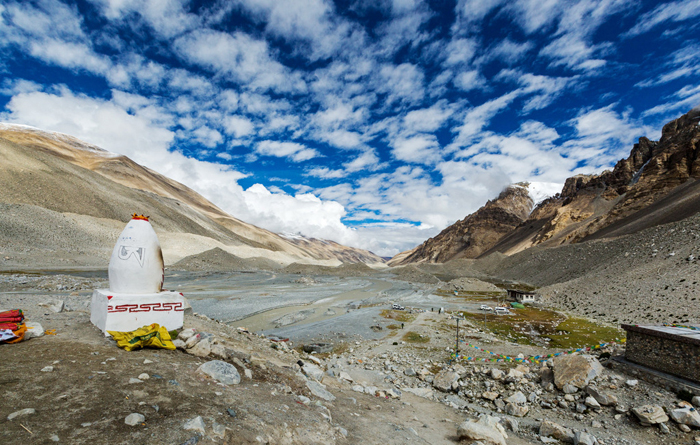 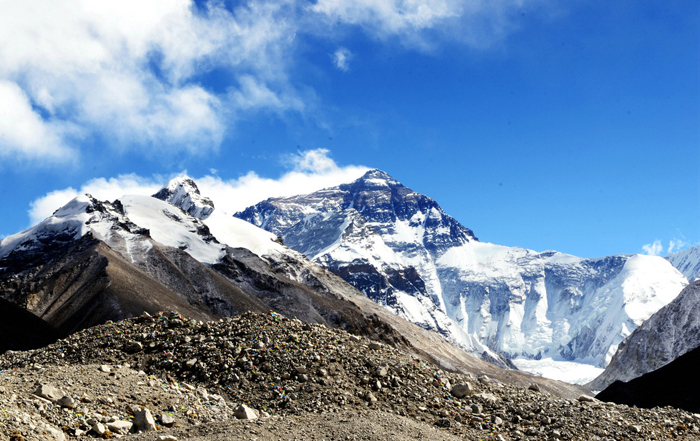 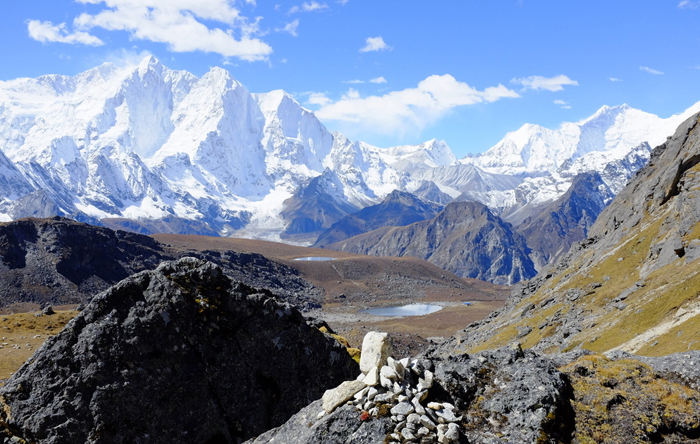 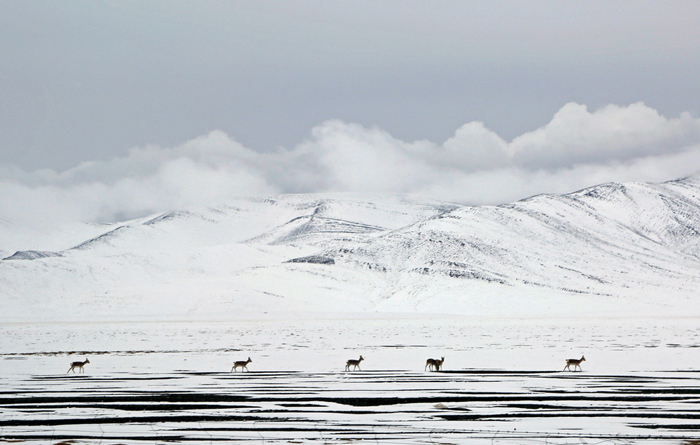 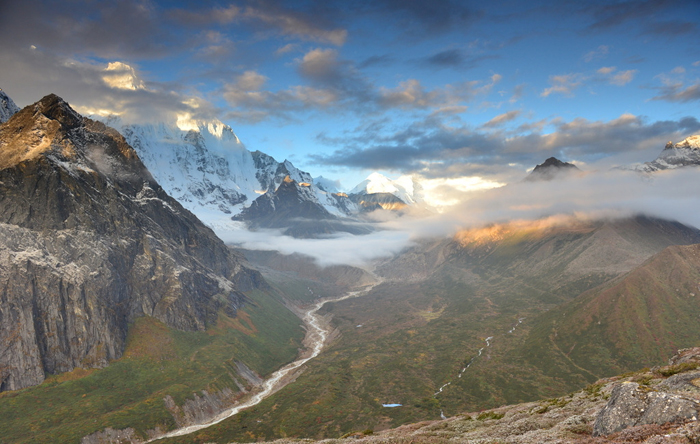 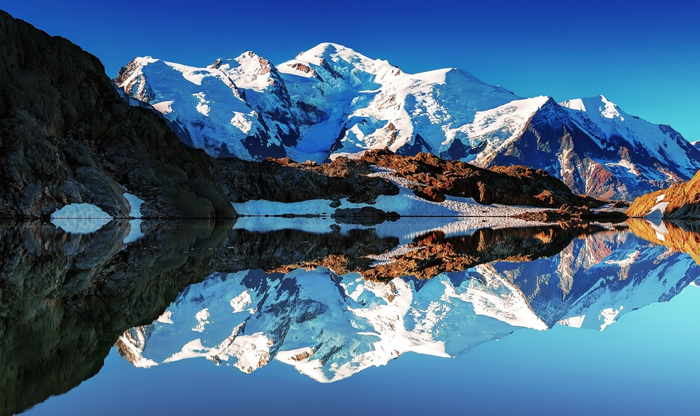 Chinese name: 珠穆朗玛峰 (Zhu Mu Lang Ma Feng)
Location: in the middle section of Himalayas on the China-Nepal border, due south of Tingri County, Shigatse, Tibet.
Prices:
- CNY180 during high season (Apr-Oct) and CNY90 during low season (Nov-March);
- CNY405 for a car with 4 wheels, and CNY605 for a car with 6 wheels;
- CNY25 for a vehicle ride from Rongbuk Monastery to the North Mt. Everest Base Camp.
Opening time: all day long
How to get there: The way for foreign travelers to enter Tibet is booking a Tibet tour or a China tour containing Tibet with a Chinese travel agent in advance.

Accommodation:
- The nearest place for accommodation is only the Rongbuk Monastery (about 10 km from Mt. Everest Base Camp), which provides about 100 beds for overnight and is said as having some of the most amazing views of the peak.
- Mt. Everest Base Camp provides clean tents which will cost about CNY40 and have to be shared with other 7 to 9 travelers. At night, stoves with fuels of cow dungs or firewood are available to keep warm, but no equipments for a bath.
Food:
- In the front of the Rongbuk Monastery, a Tibetan young man operates a small restaurant; the boss can speak no mandarin but only a little English about dishes and prices.
- No restaurant at the Base Camp and only instant noodles are available.
Climate:
- The weather is quite changeable even during one day in the area of Mt. Everest and its vicinity. Generally, June to September is the rainy seasons with atrocious weather that combines fierce winds, frequent torrential rains, raging ice and snows; November to the middle of February the next year is the wind season with powerful cold current northwesterly and the lowest temperature can reach -60℃ and the maximum wind speed reach 90m/s.
- From March to the end of May, it is the transitional period from wind season to rainy season, while September and October is the period that rainy season turns to wind season; therefore, the months of Sep. Oct after that rainy days and May before rainy days are the best time for mountaineering within some nice days.

Tips:
1. Dry season is better than rainy season (Jun-Sep) for mountaineering;
2. The Border Permit is required to enter the Mt. Everest; as it is less convenient to apply for one in Tibet, it is suggested to obtain the permit ahead of the travelling. 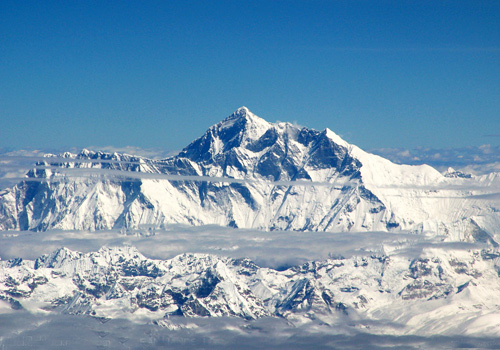 Named as Mount Qomolangma by local Tibetans, Mount Everest is the highest peak of the Himalayas as well as in the world with an elevation of 8844.43m (with accuracy of ±0.21m) according to the latest most accurate and precise measurement and calculation announced on Oct.9 2005 by the National Bureau of Surveying and Mapping of China. Literally means "mother goddess", Mt. Everest presents as saintly and covered with snow throughout the year at a depth of around 3.5 m. It is believed that the plate tectonics of the area are adding to the mount height and moving the summit northeastwards year by year. With 4 peaks of over 8000m and 38 peaks over 7000m above the sea level, the Everest together with its vicinity is deemed as the Third Pole of the Earth. 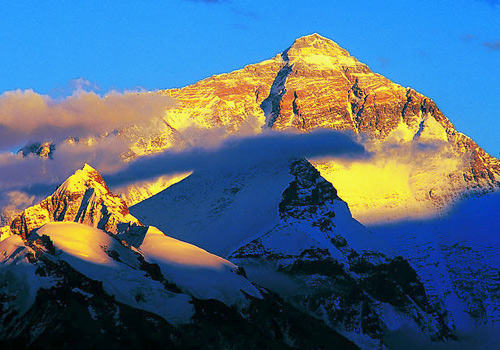 Originally an ocean hundreds of millions years ago, the Himalaya area today is made to particular spectacle with a series of highest peaks as well as a great variety of widely distributed huge scale glaciers of cirque, horn and spine; and below the snow line are abundant standing seracs with a relative altitude of 40 to 50 meters that mix with deep and serene ice caves and winding superglacial streams. The high peaks in the area includes Mt. Everest and its neighboring peaks of Lhotse (8516m) in the south, Makalu (8643m) in the southeast, Nuptse (7855m), Changtse (7580m) and Pumori (7145m) in the north. The south slope of the Himalayas is steep with 6000 to 7000 m higher than the plains of Ganges and Indus, which composes a immense natural protective screen; while the gentle slope in the north that connects the valley of south Tibet just create a beautiful habitat for Tibetans which is feasible to agriculture and animal husbandry.

More about traveling to Mt. Everest

Owing to its mighty and grandeur as well as the great difficulty of being conquered, the Everest is a great appeal to common travelers and the most coveted mountain to crest in the eyes of explorers. 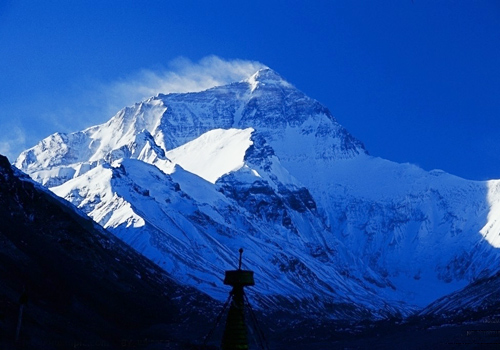 Normally, the peak can be reached from the south side in Nepal and from the north side in Tibet. As for common travelers, the last stop is the North Base Camp, which is about 10 kilometers from Rongbuk Monastery, the last attraction providing beds for night. The Base Camp is located at an altitude of 5208 m in the mountains, and those who intend to climb higher stay here for a couple of days for acclimatization and prevention of altitude sickness. All the supplies in the Camp are transported by porters and animals and the camp is also accessible by vehicles in summer, while main camping and cooking equipments should be taken by travelers themselves. Trekking along the Base Camp is special popular that carried out by thousands of trekkers every year, and the featured panoramic view of the Himalayan peaks especially the picturesque sunset are extremely impressive and have left unforgettable memories in travelers' minds. The travel harvest in the area also involves in the imposing Himalayan environment, unique Tibetan culture and the unsophisticated people live there. 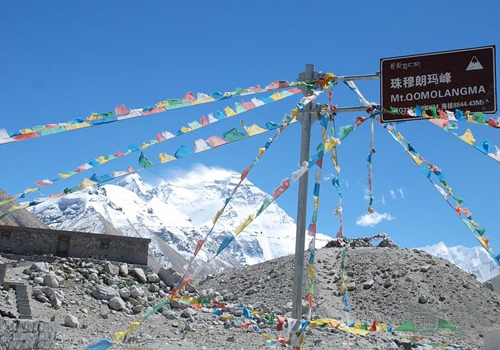 Since the late of 19th century, countless great explorers had some attempts to conquer Mt. Everest, some of which were successfully set new records in the climbing history, while some other especially those early pioneers were failed due to villainous weather and crude equipments. Now 16 routes have been testified for reference for climbers, though they are attainable at the cost of numerous formidable efforts and even some lives. 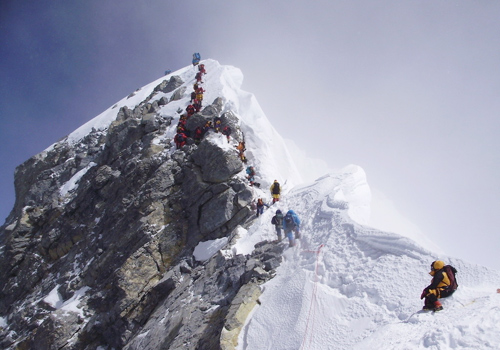 First successful ascent via North Col Route as well as by Chinese, 1960
- By three Chinese, one of which is a Tibetan on 25 May.

First ascent by a woman, 1975
- By Japanese Junko Tabei via South Route, who got to the top after being rescued from an avalance by a Sherpa.

First ascent by a Tibetan woman via North Route, 1976
- By Pan Duo, one of the nine members of a Chinese expedition.

First ascents without supplemental oxygen, 1978
- By Italian Reinhold Messner and Australian Peter Habeler on 8 May using the southeast ridge route.

First ascent from sea level, 1990
-vBy Australian Tim Macartney-Snape, who climbed from the sea level to the summit.

First ascent by a handicapped, 1998
- By American Tom Whittaker.

The quickest ascent in the history, 2000
- By Nepali Babu Church with only 16 hours and 56 minutes via the North Base Camp.

First ascent by a blind man, 2001
- By American Erik Weihenmayer.

In 1996, 15 alpinists, including the eminent alpinist Rob Hal of an expedition perished on the mountain; it is the biggest sacrifice in the history of Everest ascent.

In 2008, at 09:17 local time on 8 May, Chinese expedition with relayed Olympic torches reached the summit successfully; it is the first time that the Olympic flame blazing on the top of the Mt. Everest.