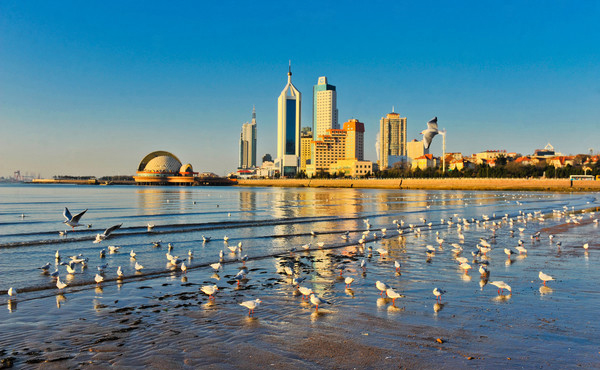 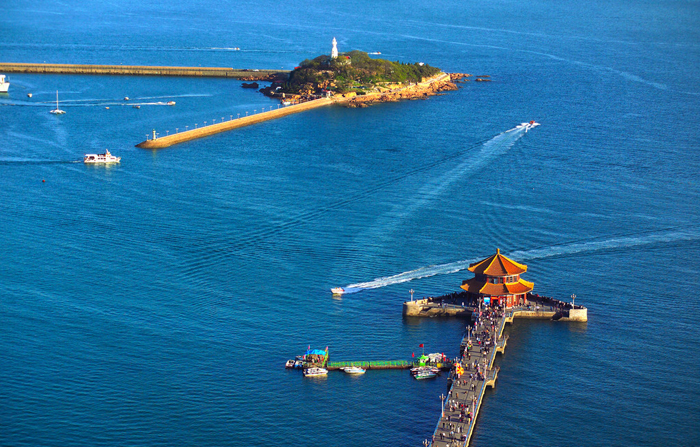 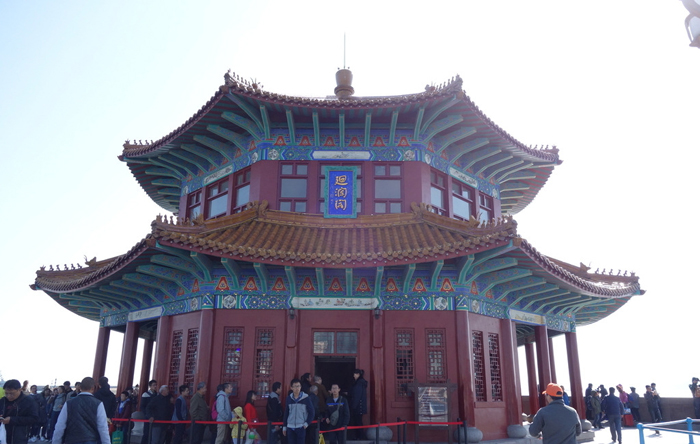 Zhan Bridge, also known asQianhaiZhanBridge,NanhaiZhanBridgeand Grand Pier, is the icon ofQingdaoCity. It is located in the southern coast ofQingdaoCity, starting from the southern end ofZhongshan Roadand stretching into the broad sea in the end.ZhanBridgewas originally established in 1892 with a width of 10 meters and a length of 200 meters and became the earliest military pier inQingdaoCity. Then the bridge was turned to be a freight pier after being invaded byGermany. Later in 1901, it was expanded from several aspects: iron rail was replaced by iron chain rail; the whole bridge lengthened to 350 meters; the road paved with railway rail; etc. Around 1905,QingdaoHarborwas the major place for commodity transport andZhanBridgeserved as an exclusive port for quarantining and piloting ships intoQingdaoharbor. The local government improved the bridge with an investment of CNY 258,000 from September, 1931 to April, 1933. Partial steel and wood structure of the original bridge was replaced by reinforced concrete and the whole road was covered with cement. The length was expanded to 440 meters and the bridge was heightened another 0.5 meter. A half-round shape sea wall was built up on the south. What’s more, a two-storey octagonal pavilion with typical ethnic architectural style was founded here, which is named Huilan Pavilion and enjoys great fame. Stretching above the shoal of the sea, Zhan Bridge of Qingdao City looks like a dragon sleeping comfortable and peacefully. Soft waves blow the bridge, hundreds of seagulls screech here and there, and stunning sunrise and sunset emerge in the boundless blue sea. It is a paradise for human beings and creatures. As time goes by, the place is gradually viewed as one of the major landmarks ofQingdaoCityand also a great scenic spot to explore inChina. 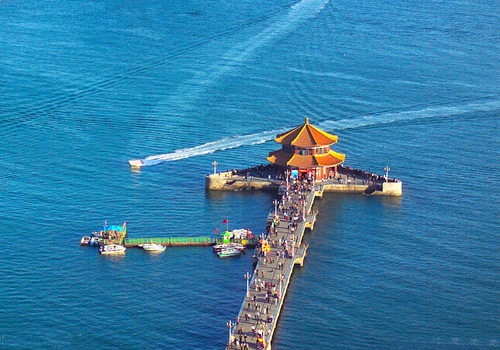 Being of the same age as Qingdao City, Zhan Bridge suffered the humiliating time and witnessed the construction and fast development of it as well. Qingdao ( named as胶澳, Jiaoao at that time ) was founded in 1891 in Qing Dynasty (1644-1911). For better transporting military supplies, the Qing government started to build up the bridge in 1892. The Zhan Bridge was designed by Chinese engineer and stands for the wisdom of Chinese nation. As the earliest port in Qingdao city and the only sea route for supplying munitions, it played an extremely important role. In 1897, in the name of military maneuver, Germany landed on the Qingdao bay from Zhan Bridge and took possession of the Qingdao city by violence. Its function was shifted to be a tourist attraction since 1904. During the First World War,QingdaoCitywas invaded and occupied again byJapan. Landing on Laoshan Yangkou (崂山仰口) and then having the parade in Zhan Bridge, Japan declared their full sovereignty in Qingdao City. The city was not taken back by the Beiyang Government of China until 1922. The coastal zone of Qingdao City includingZhanBridgewas inscribed as the first batch of AAAA grade scenic area by the National Tourism Administration in 2001. 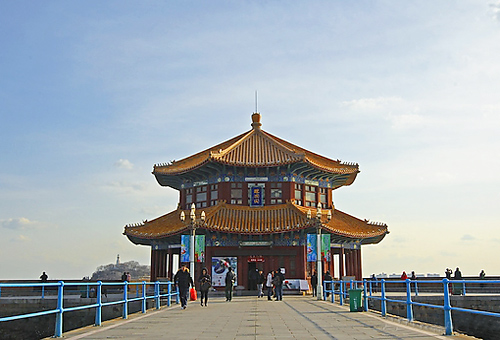 Huilan Pavilion was built up on the Zhan Bridge. The three Chinese characters Hui Lan Ge (回澜阁, Huilan Pavilion) on the plaque was written by Shen Honglie (沈鸿烈), the former mayor of Qingdao city. Then it was robbed by Japan and exhibited in the army museum in Tokyo in order to show off their achievements during the war of invading China. The words on the new plaque now are from the famous calligrapher ---Shutong (舒同). Huilan Pavilion is a two-storey octagonal pavilion and its roof is covered by colorful glazed tile. 24 red-painted pillars support the pavilion and 34 spiral ladders in the middle help people reach upstairs for a better view. The blue sea stretches on all sides as far as eyes can see when visitors look out from the pavilion. People can get down at the Huilan Pavilion for relaxing and entertaining. In 1936, ten famous good sceneries in Qingdao City were selected and Huilan Pavilion located in Zhan Bridge was chose as the best one among these ten spots.

After invading the Qingdao City, Germany made a road from south to north in order to offer a convenient route to build the deepwater pier on seaside in 1899. This road is the original form ofZhongshan Road, which was renamed after Dr. Sun Zhongshan (1866-1925, also known as Sun Yet-sen in Cantonese) in1929 inmemory of this foremost pioneer of Chinese democratic revolution. Today, it has become a commercial street stretching for 1300 meters with 63 buildings and over 160 stores. Connecting withZhanBridge, the road makes a fantastic mixture of natural sea beauty and commerce. Parkson Mall, the highest building opened in September of1998 in the road, is one of the first batch of 18 joint venture retail enterprises with the approval of the State Council of China. With the total investment of CNY 0.78 billion by the First Department Store of Qingdao City and Golden Lion Corporation fromMalaysia, it gained the fame of theBestCommercialBuildinginShangdongProvinceat the time.