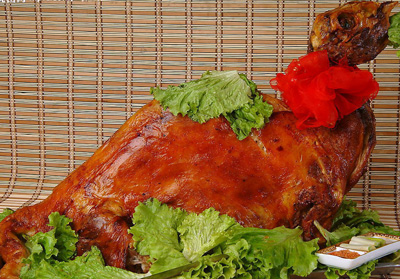 Food in Qiemo remains the unique flavor of Xinxiang Uyghur autonomous region. The most well-known must be nang, noodles served with soy sauce, Xinxiang rice and shish kebab. In the bazaar, stalls selling roast whole lambs are also available.

Shish kebab is an appetizing snack in Xinjiang, Qiemo included. Cut mutton and mutton fat into pieces and bunch them evenly before roasting. Then drop pepper powder, refined salt and cumin powder on it. Several minutes later you just relish it to your heart’s content!

Nang is the main staple of residents in Xinjiang. It is a kind of crusty pancake, similar to sesame seed cake, tasting crisp or soft. Most nang is made from wheat flour or corn wheat and added to sesame, onion, egg, oil, butter, milk, sugar and salt. Another kind of nang is added to mutton. Generally, nang is round in shape with various tastes.

Also called latiaozi, it is made by stretching wheat flour, added a variety of vegetables and mutton and beef. It is a kind of popular noodle among nearly all ethnic groups of Xinxiang especially that is made by the Hui ethnic minority and the Uygur ethnic minority.