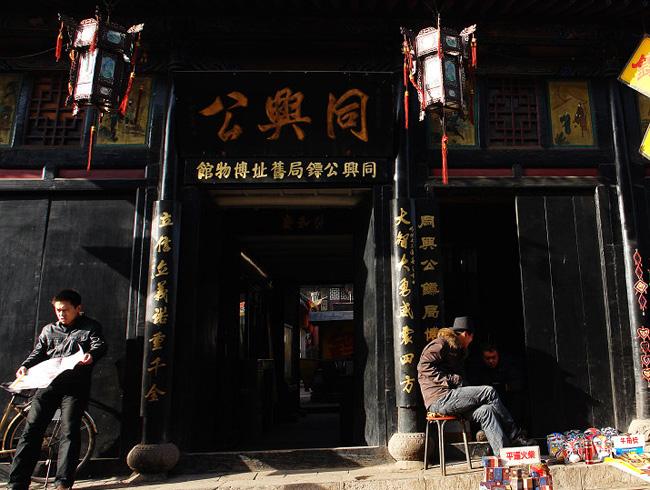 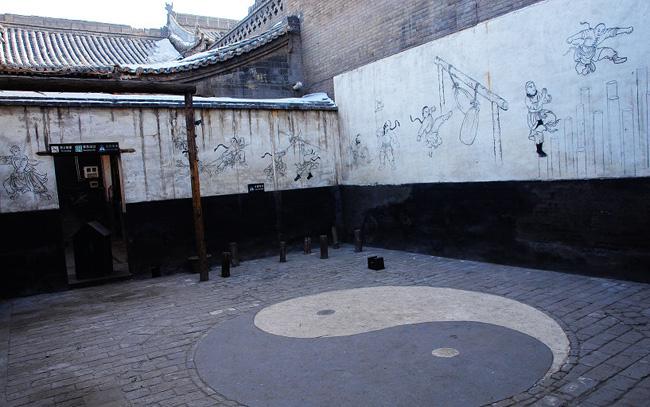 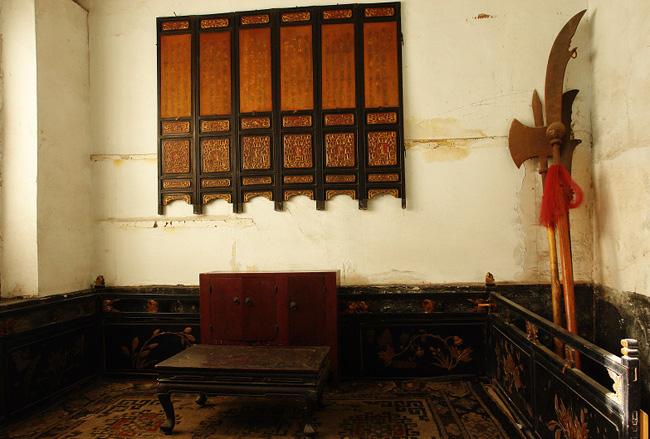 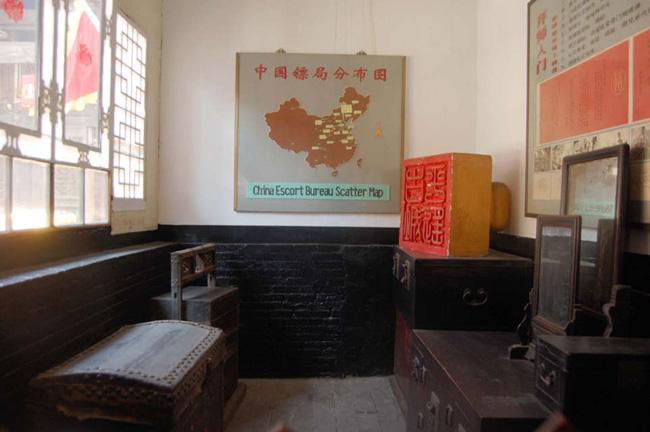 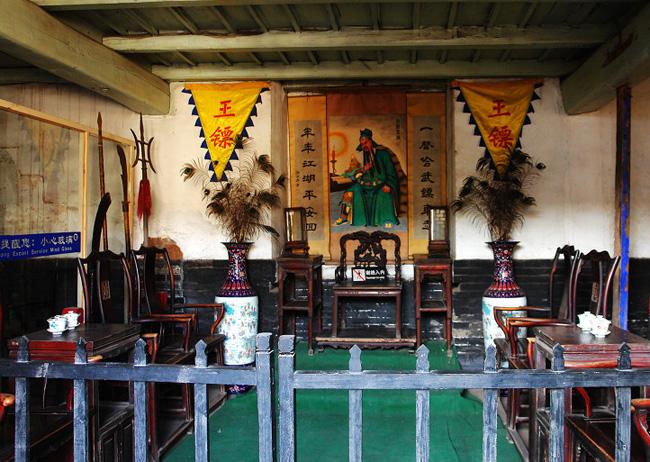 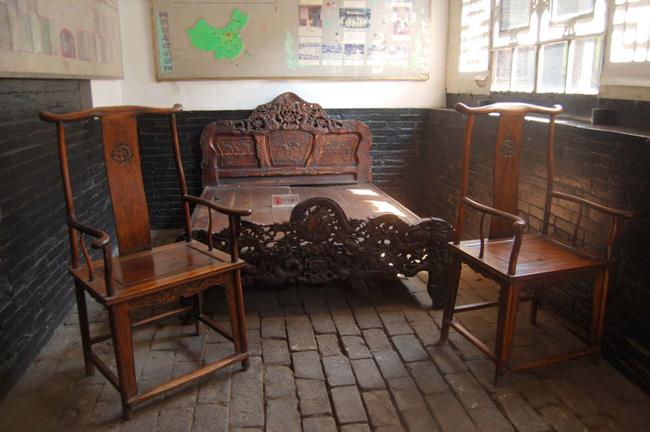 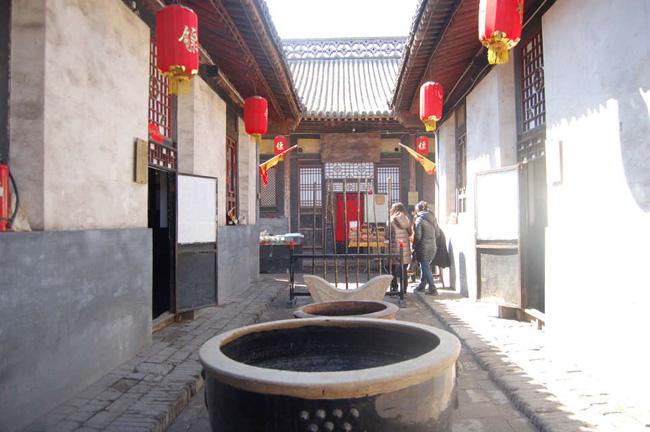 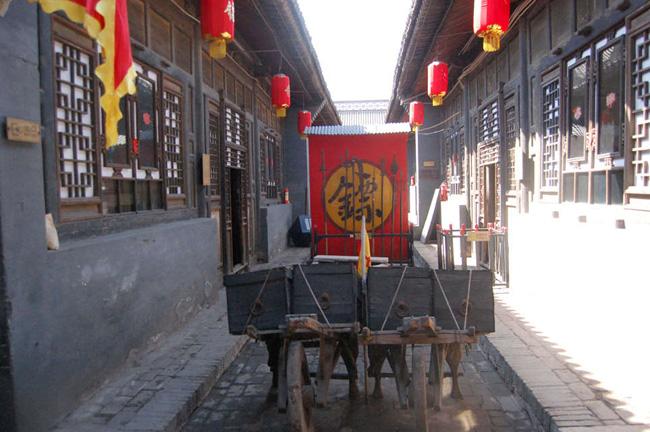 Chinese name: 同兴公镖局 (Tong Xing Gong Biao Ju)
Location: On the No. 105, South Street of Pingyao Old Town, Jinzhong city, shanxi province.
Admission fee: 150yuan for Pingyao Old Town, which include many scenic spots there.
Opening time: 08:00-17:00.
How to get there:
Walk or take a tricycle from the railway station for several minutes to the Old Town of Pingyao, and you can find Armed Escort Company Museum within the town.
Best time to visit: All year round.

Located on the No.105 South Street of Pingyao Old Town, Tongxinggong Escort Agency was set up in the year of 1855 by Wang Zhengqing, the then martial arts master famous around China. And his son Wang Shumao, who surpassed his father in martial arts, made it even more prosperous. Therefore, Tongxinggong Escort Agency became one of the renowned escort agencies all over China at the beginning of its establishment. 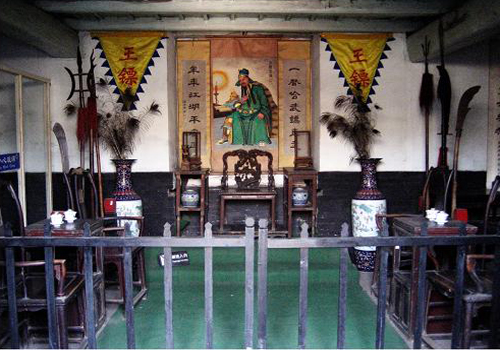 In regard to the founder Wang Zhengqing, born in the Qing Dynasty, made great strides while studying with martial arts master Liu Liu for three year. Later, he served an apprenticeship at Jia Diankui, senior fellow apprentice of Liu Liu. It was from Jia Diankui that he learnt versatile martial arts; it was during that period that he could learn from other masters from time to time. At the age of thirty, he was the martial arts trainer of Zhuwen, the then Jiangxi official. In the next seventeen years, he did good deeds, for instance, helping to solving public security problems. When he was 47 years old, Wang Zhengqing left for Pingyao and founded Tongxinggong the next year. At that time, Wang Zhengqing, Dai Longbang and Li Yuxiu were called “the Brilliant of North China”. Shaolin Temple once carved inscription for Wang Zhengqing, which was recorded in the history of martial arts circles.

What to see in Armed Escort Company Museum?

Escort agencies, in a narrow sense, are special agencies offering security service for individuals and merchants. In the mid Qing Dynasty when exchange shops in Pingyao sprang up, business in Pingyao ushered in its golden age, which resulted in the prosperity of escort service.

Compared with martial arts learners, the man in charge of counting room must be adept at musical instrument, cheese, calligraphy, and painting. In the counting room, you can find an abacus whose back is a piece of wood. It was made in such a way that the manager hoped his employees could work meticulously. And you can also find two security boxes, with the heaviest and earliest one made of elm. 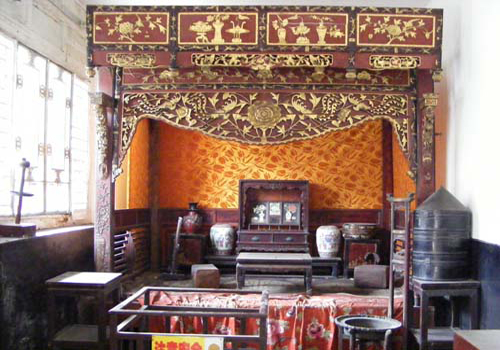 The bed in the museum is unique around China. On it, you can find the yellow colour which is not golden dust but gold leaf of pure gold. In Chinese, “Phoenix Playing with Peony” has the connotation of auspiciousness. The canopy bed is indeed modular furniture, which facilitated people to move it into the room.

There were two ways to escort, by water and by road. As shanxi province is situated in Loess Plateau, narrow roads are particularly more; therefore, people then found it better to escort by wheelbarrow, but it is difficult to balance. If you are interested in that, you can try when you pay a visit to Tongxinggong Escort Agency. Security car, flag, box are three requirements of an escort agency. On the flag the name of the man who escorted was printed in that it’s likely to run across robs on the way. However, robs would retreat if they found the escort man a famous one; later it became symbolic of the escort agency. The yellow colour represents the location of Shanxi province, red colour blooming business, and blue colour pouring profits. 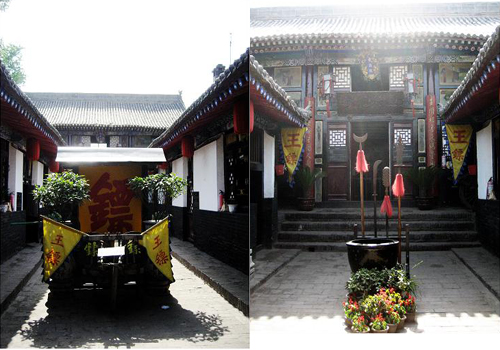 The bronze birthday scrolls was a gift for Wang Zhengqing on the occasion of his seventieth birthday party by Hou Dianxuan and his niece, the third shopkeeper of a exchange shop called Rishengchang, which was inscribed with "南极星辉", referring longevity forever. Besides are two exquisite pictures which were woven by cotton. On the opposite, two glasses can be discovered. And the jar here now is used for prevent fire prevention, but in the past, it was placed in the middle of the courtyard, in the midst of which were fish, meaning every year the household will have enough things to spend in Chinese.

Raising your head, you can find two horizontal inscribed boards along the eaves. The upper one of yellow and blue colour was inscribed with "奉旨议叙", which was given by Empress Dowager Cixi, while the lower one engraved with "庆衍花龄" was sent by a group of keepers of exchange shops to the man who had escorted Empress Dowager Cixi on the occasion of his 66th birthday. 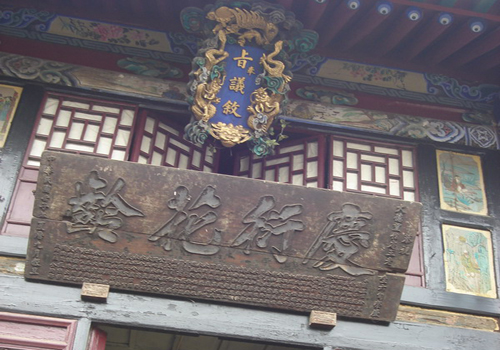 The main hall was for receiving guests, which has the same function of the nowadays distinguished guest room. The chair in the middle was not for common people but the chief of jianghu. Behind the chair, a picture of Guan Yu who is symbolic of loyalty, and couplets which read "一声哈武镖车走, 半年江湖平安回", telling the difficulty life of the escort, are visible. The gun beside is what Wang Zhengqing once used. And the desk was the main warming facility then. When it came to winter, a copper basin filled with carbon would be placed onto it to heat the room.

In the yard, there are trough for training muscles, iron locks weighing twenty-five kilogrammes, piles positioned on the basis of Big Dipper for practicing horse stance and Qinggong.