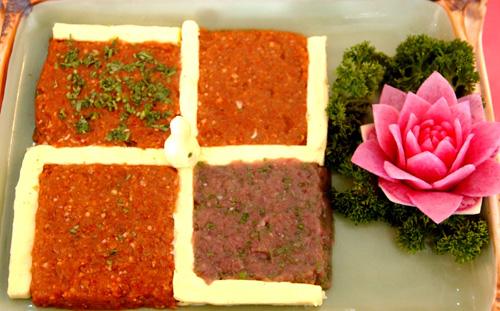 Just like other areas in Tibet, Ngari cuisines are mostly Tibetan food or Sichuan dishes. As it is remote that many a food material is transported from the outside, the food are very expensive in Ngari. Burang County, enjoys a good weather because of its low altitude in Ngari, produces many vegetables. In Seng-ge Kambab, Xinjiang Cuisines are also available as some Uigurs operate restaurants here. The same as other regions in Tibet, Buttered tea, roasted barley flour and air-dried beef are the main food in Ngari.

Recommended specialty: Blowed Lungs (吹肺)
Also called preserved lungs, it is a unique preserved meat of Tibetans. To blow and pat the fresh pig lung from its throat to expand the lung, to infuse it with preserved stuffing which are mixed salt, fruit powder, chili powder and mashed garlic; and then to dry it in the kitchen. After 2-3 months, the lung is done.