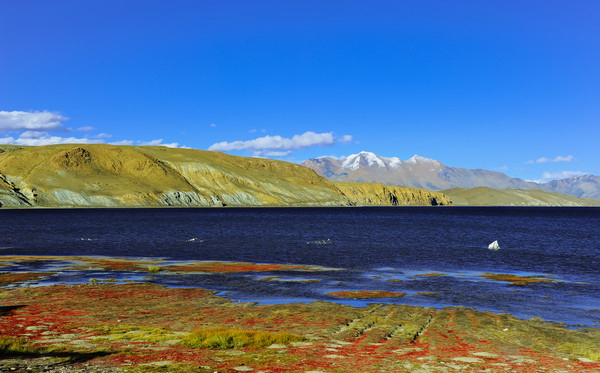 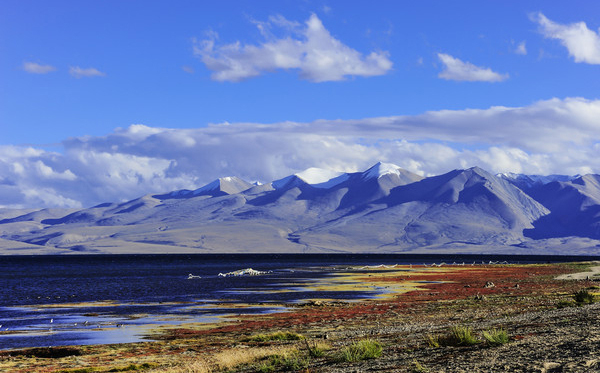 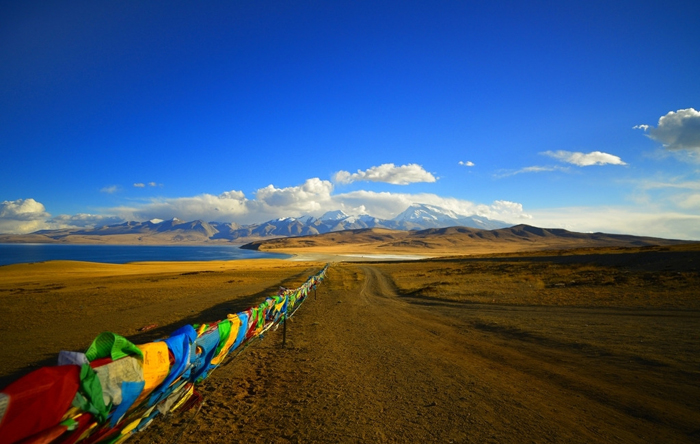 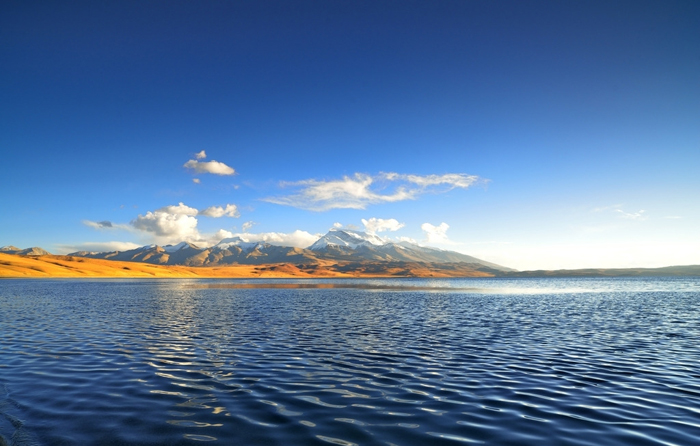 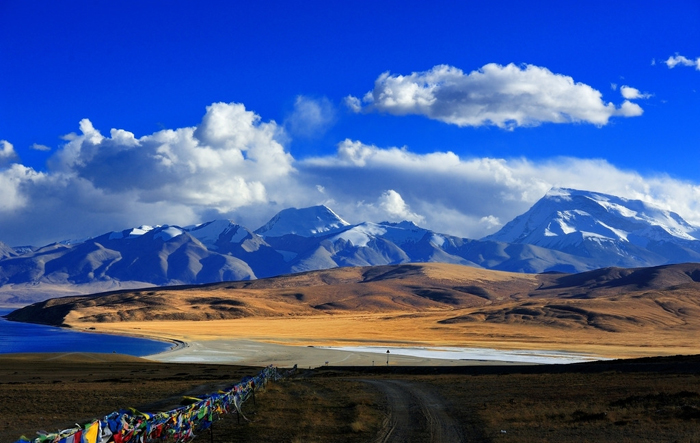 Chinese name: 玛旁雍错湖 (Ma Pang Yong Cuo Hu)
Location: south of Mount Kailash, 35 km east of Burang County, Ngari, approximately 800 km from Lhasa, Tibet.
Price: CNY200 (sold as a combination ticket with Mount Kailash)
Opening time: all day long
How to get there: The way for foreign travelers to enter Tibet is booking a Tibet tour or a China tour containing Tibet with a Chinese travel agent in advance.
Best time to travel there: from May to October

As one of the Three Holy Lakes (the other two are Nam-tso Lake and Yamdrok Lake) in Tibet and seated at 4588 m above mean sea level, Lake Manasarova is one of the highest fresh-water lake in the world, as well as the largest freshwater lake with greatest water transparency in China. Pear-shaped, the lake of Manasarova is wide in the north and narrow in the south; its longest length is 26 km, the shortest length is 21 km, the mean depth is 46 m, the maximum depth is 81.8 m and the surface area is 412 square km; its water is quite clear and the transparency degree reaches 14. With a straight lake shoreline, its circumference is 83 km. Mainly derived from melt water and rainwater, some of the water in the lake also comes from springs. 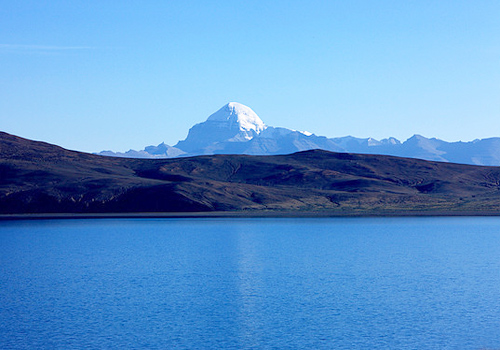 Around the lake are distributed Natural hot springs, desert steppe of the diluvial plain and piedmont with Stipa glareosa, Stipa purpurea, and swampiness meadow. As the source of some longest Asia Rivers (Indus River, Ganges River, Brahmaputra River), the lake is the hydrographic nexus of the Himalaya that considered as the "holy lake" with special natural beauties. In the west, next to the lake is the Lake Rakshas Tal (known as ghost lake); interesting is that a freshwater lake of Manasarova and a salt water lake of Rakshas are just separated by a channel.

The lake was named as Manasarova after a Religious War in 11th century with the meaning of victory and undefeated in Tibetan language. The same as Mount Kailash, the lake is a place of pilgrimage, popular with religious people from India, Nepal and its vicinity. It is believed that bathing in Manasarova and drinking its water can cleansing one‘s all sins for even a hundred of lifetimes. A number of monasteries were built around the lake, though only 8 of them remains to this day which are just located in all directions; among them, the most notable one is the ancient Chiu Gompa Monatery, which has been built right onto a steep hill and looks as if it has been carved right out of the rock. Lake Manasarova was described in many religious works as its water is just like pearls and sweet in flavor, it is a perfect lake, the authentic paradise, the Shangri-la of immortals and the nirvana of all creatures. 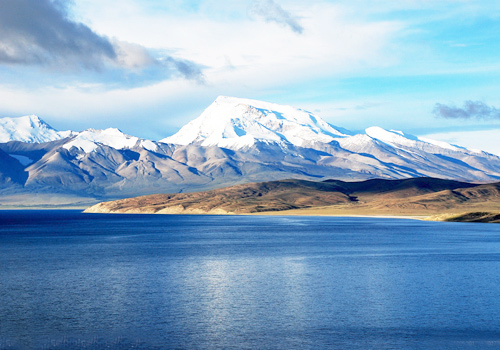 Hailed as the mother of world's rivers, Manasarova is the "abode of immortals in the west" (西天瑶池) portrayed by the eminent Buddhist monk of Tang Dynasty (618-907) Xuanzang (602-664) in his famous Western Regions Records (大唐西域记). In Buddhism, the lake is also associated to Anavatapta in Sanskrit and Anotatta in Pali, the place that Queen Maya has conceived Buddha. For Buddhists, it is the purest one, the sweet dew granted by Gods that can drive away vexations and evils in one's soul.

In Indian myth, the lake was created firstly in the God Brahma's mind, as he needs a bath place for his son, the lake then manifested on the earth. For this reason, in Hindu theology, the lake is a personification of purity that one who drinks water from it will go to the Abode of Lord Shiva after death. Most Hindus bath in the lake during their lake circumambulating. 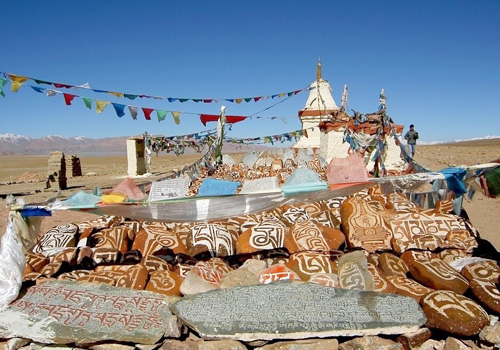 Tibetans and Bon disciples are just trekking or kowtowing with their pilgrimage way instead of entering the water; as for ordinary travelers, it is unwise to enter the water too, as the water is quite cold even during the warmest days, although some would do so to "cleansing hardships and their inner uneasy". It is said that the lake is full of treasures; a gain of a fish, a stone, or even a feather of a hagdon from the lake is a good omen for a permanent happy life; people also take off their jewels sometimes and throw into the lake to show their devout.

4-5 days are required for a lake circumambulating. Except the second night that should be spent outdoors, temples along the journey will provide beds for overnight; with the poor board and lodging conditions, it is necessary to take along tents, sleeping bags and sufficient food. 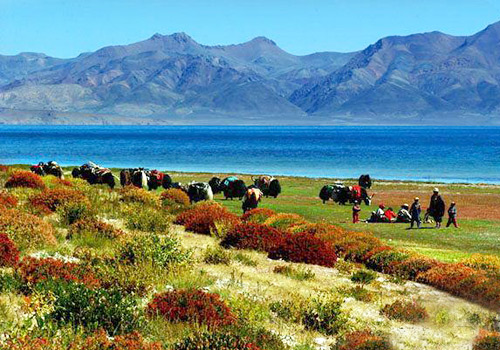 Fewer people circumambulate the lake than that of the Mt. Kailash; though not as arduous as mount circumambulating with beautiful landscapes along the way, the unchangeable views may also boring after a couple of hours; what is more, in rainy seasons, the mountain streams blocked the way would be great challenges; therefore, it is suggested for most travelers to stay in Chiu Gompa for a few days, just for a comfortable relax with hot springs and the beauties of lakes and mountains.

There is no definite starting point for circumambulating; a circle of the lake in clockwise direction is the completion of the peregrination. Owing to the most convenient transportation, the Chiu Gompa in the northwest of the lake is the most popular starting point. As for ordinary travelers, it is suggested to have the routes as start at Chiu Gompa, and then to the Trugo Con, Seralung Gon and Hor in counterclockwise direction, with which the best lake view and main places of interest can be enjoyed. 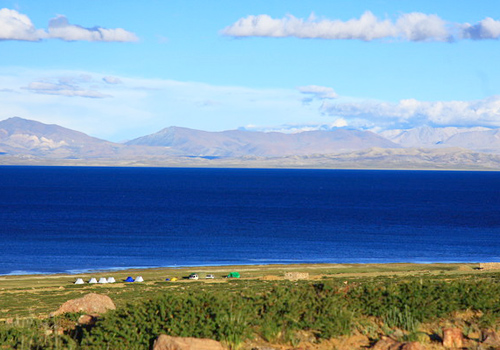 Travel tips:
1. A small village nearby the Chiu Gompa Monastery (the slope of which is regarded as the best site for a lake view) is the popular foothold for most travelers. It is 30 km southeast of Dakin without any passenger coaches.
2. There are 2 hostels operated by Tibetans in the village but only providing rice and vegetable dishes. It is better to bring some instant noodles or solid food.
3. There is a natural hot spring besides the village, which has been built to be an outdoor bath pool by locals; to have a bath there should be the great enjoyment during the stay in the area due to the poor living conditions.
4. Being lack of vegetables, multivitamin pills should be in the list of package; in addition, sufficient cold-proof clothes, antidiarrheal, anti-inflammatory and medicines for colds are also the basic equipments.
5. Thought praised as sweet by locals, the water from the lake should be purified before drinking theoretically.