Senior officials in Inner Mongolia vow to accelerate the development of the local tourism industry to not only enhance economic growth, but also respond to State Council guidelines issued in 2011, according to Bater, chairman of the autonomous region. 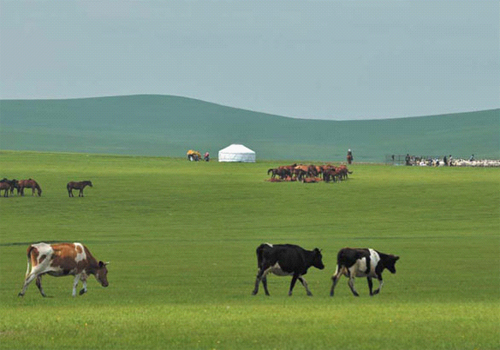 (The Inner Mongolia autonomous region offers travelers the chance to experience the largest and best grasslands in China. Zhang Ling / For China Daily)

Known for its vast grasslands accounting for 27 percent of the nation's total, Inner Mongolia has the six pasturelands in Hulunbuir, Horqin, Xilin Gol, Ulanqab, Ordos and Alxa areas.

The region also has many renowned historical relics such as the Tomb of Genghis Khan and the Tomb of Wang Zhaojun, a large earthen pyramid made for the remains of one of the four great beauties of ancient times.

"With more high-quality modern services provided, our goal is to turn the autonomous region into an appealing destination for grassland tourism in China as well as a sign of ecological tourism and cultural experience," said Bater, who like all Mongolians has a single name.

And the region's tourism industry has undergone a clear change in recent years, he added.

It has become a major new engine driving the economic growth and social transformation in Inner Mongolia.

Statistics from the region's tourism bureau show that during the 11th Five-Year Plan period (2006-10), tourist numbers grew 16.8 percent each year and revenues increased 28.6 percent, both higher than the national average.

Tourism can also promote the growth of more than 100 related industries such as restaurants, transportation and entertainment, Bater said.

He noted that every 1 yuan in tourism income brings 4.3 yuan in new income along the industry chain.

And as a "green" industry, tourism will gradually help improve the overall industrial structure and transform the economic system, he said.

It is also a labor-intensive industry, which is an effective way to ease unemployment and improve people's quality of life , he added.

The region now has 180,000 residents in tourism-related industries and services.

"A series of actions will be taken to support the industry development," said the chairman.

The government will create a better environment for tourism investment, adopt preferential policies for tourism projects and help lower operating costs of travel agencies and companies.

By 2015, major indexes that measure the tourism industry are expected to double over 2010. Total income is projected to reach 150 billion yuan, about 8 percent of the region's GDP, Bater said.