Your Position: HomeChina NewsYuyang Ski Resort - Bunny Hills and Beyond

Skiing in Beijing somehow remains a bit of a secret, in spite of the fact that there's over ten within reach of the city center. Yuyang is about an hour's bus ride from Beijing, a modest mountain in the eastern district of Pinggu. 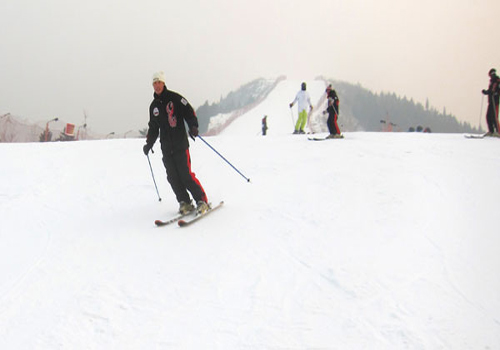 It's essentially one face of a mountain, which according to the website has over three kilometers of trails, accessible via two chairlifts. The map claims that nine runs are available, though in effect there is just one main run down the mountain, one smaller branches down the left side, plus two bunny hills on the right. Faster skiers or snowboarders could cruise from the heights of the top chairlift to the base of the mountain in roughly seven minutes.

The bottom of the central run is where the ramp section is located, targeted at snowboarders though certainly open to all. A series of rolling ramps and rails should keep tricksters entertained.

The mountain allegedly has trails for all levels of skiers, but although the numerous icy patches can make descents dicey, the lower runs aren't particularly challenging. Black runs on the upper mountain are steeper, but straightforward.

Like any ski hill near Beijing, the snow is usually all manmade, which may be a turn off for ski snobs, but the truth is, beggars can't be choosers in this environment.

Yuyang is particularly well-suited to beginners. It has two reasonably spacious bunny hills, and a wonderfully forgiving conveyer belt to take newbie skiers and boarders up the hill.

Staff at Yuyang are particularly helpful, meeting visitors at the gate, and leading them through a potentially complex process of renting gear and suiting up. However, they can also be entirely too helpful in trying to convince beginners that they need to take lessons at 200 yuan a pop. Such coaches certainly have the skill to teach people how to get down the hill, but those who are uninterested in employing them may be bothered by them up and down the mountain.

Admittedly, safety is an issue, and even on the slight slope of the beginner runs, people slowly careening into fences and other people is not an uncommon sight (usually to the hilarity of onlooking friends). Liu Ying was enjoying her first time on skis, and was quick to recognize its difficulties. "If you go skiing for the first time with some friends who also can't ski well, hiring a teacher's not a bad idea," she nodded. "Because skiing's a bit of a dangerous sport. If you can't ski, if you don't know how to turn. You could fall down or hit somebody. I crashed into a person, and somebody crashed into me too!"

For beginners and advanced skiers alike, a key draw at Yuyang is the price tag. In western countries, the cost and effort to get in a day on the hill are not to be taken lightly. At Yuyang, however, prices are downright reasonable. Four hours of skiing on the weekend costs 260 yuan for entrance fee, lift ticket and equipment rentals. On weekdays, the price drops down to 180 yuan. Visitors should note that prices will be slightly elevated for the upcoming Spring Festival holiday.

People who bring their own equipment should receive a 40 perecent discount for doing so.

For those who have no interest in even attempting to ski or snowboard on the slopes, there is a section of snow dedicated for sledding (clearly designed for children), or a section for "snow motorcycles."

Having only opened in 2006, Yuyang is kitted out with decent equipment and facilities. There is a large, spacious building filled with rental clothes, equipment, lockers, retail stores and restaurants.