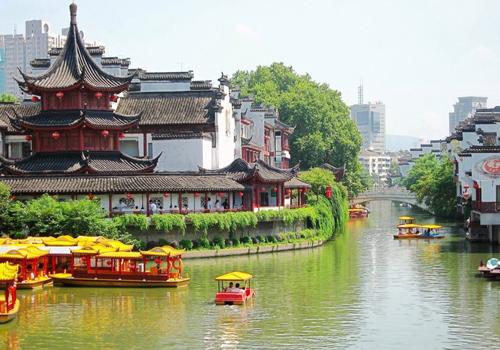 Nanjing falls within subtropical humid monsoon climate with plentiful rainfall (with an annual precipitation of 1200mm) and four distinct seasons. It has an annual average temperature of 15.4 Celsius degree and the extreme minimum temperature is -13.1 Celsius degree. In spring in Nanjing, the weather is fine and warm; from the middle of June to early July, it is the season of mould rain; in summer, it is scorching, and the extreme maximum temperature has been reached 40 Celsius degree in the history; in autumn, it is cool and dry; while in winter, it is frigid and also dry.

In the past, Nanjing, Wuhan and Chongqing were labeled as "Three Heating Stoves" due to high temperature in summer. Nevertheless, Nanjing has taken off the "hat as a stove" in recent years due to the variation of atmospheric circulation and the intensive afforestation. The high landscaping ratio of 30% not only pulls down the temperature but also attracts many tourists to Nanjing in the summer.

With notable difference in temperature among four seasons especially between summer and winter, Nanjing is a city suitable for four seasons to visit with totally varied scenes. In December, it is likely snow; the elegant snow scene in Nanjing is of most features of southern style - more lovely and charming than the generous in North area.