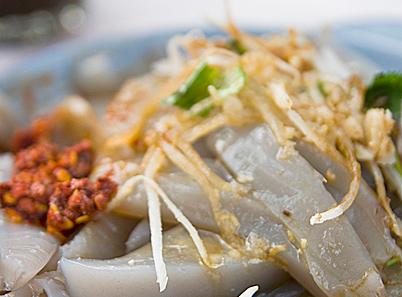 Lijiang food is represented by Naxi Cuisine, which is very popular with people though it is not the most representative food in Lijiang. Besides, many restaurants operating Chengdu food and Sichuan Cuisine are also found inside and outside the ancient city of Lijiang.

Sifang Street (四方街), or Square Street, is the most famed snack street in Lijiang. Tens of restaurants and chophouses fill up with this short and narrow street but offering a wide variety of dainties. Almost each restaurant provides the most characteristic local flavor- the Yunnan rice noodles, for the reason of which the street is also referred as Lijiang Rice Noodle Street.

Among many Naxi dishes and snacks, Ham Baba is the most famous. Besides, Naxi hot pot, chickpea bean jelly, stewed chicken with tofu, blew pork liver and buttered tea are also popular.

A requisite dish on a local Naxi people’s formal dinning table, the blew pork liver is specially made, tastes tasty and refreshing. It is made often in the twelfth month of the lunar year. Blow the fresh pork liver as big as possible and then dry it in the sun. Boil the dried pork liver, slice it after cooling and season it with Chinese parsley, fried groundnut kernels, salt, vinegar, pepper and sesame, then a delicious dish is done.

Lijiang Baba is a feature of Naxi people. It has two flavors for choice, sweet and salty. Sweet Baba is fond by young people and Salty Baba is popular with elders.

Bronze-made pots are the favorite kitchen ware in Naxi families. They always use bronze pots for hot pots in cold winter to entertain guests or for picnics in spring outings.