Leshan is a small city located in the southwest of the Sichuan Province, at about 180 kilometers away from the capital city of Chengdu, and 20 kilometers from the gorgeous Emeishan (Emei Moutain), one of the Four Sacred Buddhist Mountains of China. The city of Leshan, literally meaning "happy mountain" is situated on the border of the Sichuan Red Basin, at the confluence of the Dadu, Min and Qingyi rivers. It is particularly renowned as a hot scenic spot of Sichuan Province for being home to the world's biggest Buddha ranked as a UNESCO World Heritage Site. The Leshan Giant Buddha, also called "Dafo" (大佛) is a serene and somnolent-looking seated Buddha statue carved into a cliff and overlooking on the rivers, no one can miss it while visiting the region. Changing from a poor little village to a now dynamic city thanks to the recently built Chengdu-Leshan highway, Leshan is definitely the place where to live Sichuan culture at its best point. Lush vegetation, rich flora and fauna including the beautiful Grand Panda, historical sceneries and worldly ranked sightseeing... The riverside city of Leshan is also a place where seeing some typical old Chinese streets and markets, and a stop-off point city for a day or so that will let travelers marvel on China's great beauty!

History of Leshan – When Buddhism and history intertwine 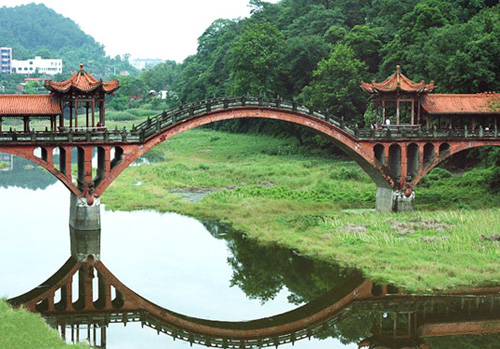 The history of Leshan traces back to more than 3000 years ago and has always been intertwined with the one of the Leshan Grand Buddha. In ancient times, the city was known under the name of "Jiazhou" (嘉州) and had a great reputation for its abundant nature and beautiful landscapes. Located near to the city, the Grand Buddha statue was constructed from 713 AD to 803 AD during the Tang Dynasty (618 AD –907 AD), a 90 year construction masterpiece that implicated a lot the inhabitants of the city of Leshan in itself. The building of such a large-scale Buddha statue was instigated by a Chinese buddhist monk called Haitong who wanted the Buddha to protect the boats crossing the turbulent waters of the river and prevent disasters. The place was carefully chosen for facing the confluence of the rivers and the Emeishan, already erased as a sacred mountain of Buddhism. However, constructions stopped for 70 years for lack of foundings after Haitong's death, the Grand Buddha's construction continued thanks to generous sponsors. Part of Leshan's history, poems, songs and other stories, Leshan Grand Buddha definitely marked the area. Of an amazing dimension, the Leshan statue is even by 17 meters taller than the one located in Afghanistan. This is due to this tremendous large-scale size and recognized human masterpiece that the Leshan Grand Buddha was ranked in 1996 as a UNESCO World Natural and Cultural Heritage Site together with the Mount Emei Scenic Area. World’s largest Buddha, the statue even resisted the dramatic 2008 Sichuan earthquake. An old and ancient masterpiece that still teases Natural laws! 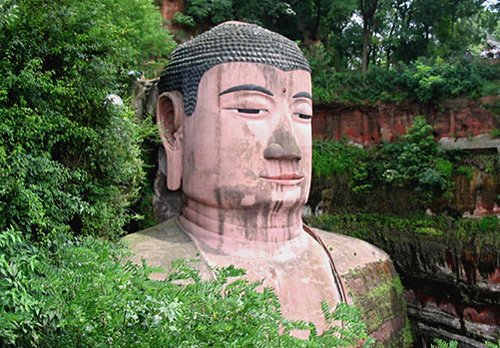 The Leshan Grand Buddha is renowned for being the largest stone sculpture of Buddha in the world. Indeed, the Buddha facing Mount Emei with rivers flowing below his feet and depicting barefooted with drooping ears and hair arranged in a spiral topknot, is just a marvel for any traveler. Chest exposed, hands resting on his knees, head level with the Lingyunshan's cliff top and toes larger than a regular human height, the Grand Buddha of Leshan is definitely awe-inspiring to anyone who has the chance to see it. With its solemn-look, 71 meters height, 28 meters long shoulders from one point to another, 14.7 meters long and 10 meters broad head, this is just amazing to think that this statue had been built more than 2000 years ago, and undertook many earthquakes without even moving an inch.

Leshan nowadays – When UNESCO pays tribute to a human masterpiece 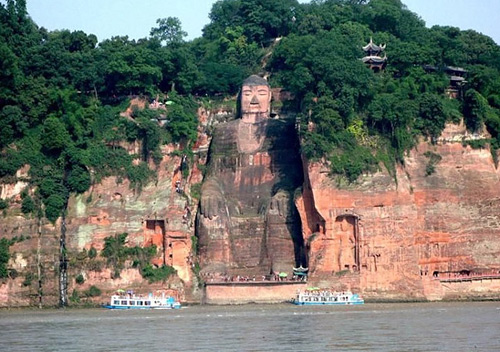 Leshan is without any contests part of the ten top things to do in China on the same level with the Great Wall, Shanghai, the Forbidden city, the Terracotta Army, the Giant Pandas, etc... Leshan is one of the worth-visiting scenic spots of the Sichuan Province. Endowed with beautiful lush scenery, tourist sightseeing, rich agricultural features and high nearby tourist sights, Leshan today stands as a high scenic spot. While traveling to Leshan, one of the most appreciated sightseeing is inevitably the one when sitting or standing on a boat cruising the Min River and passing right in front of the holy mountain - Lingyun Mountain: a panoramic view on the Buddha that will just fill everyone with emotions! Nearby, a visit of the unsuspected "Pagoda of the Souls" standing at the top of the Linyun Mountain, as well as one at the Wuyou Mountain and temple are also great highlights. Travelers to Leshan would just marvel at the sights displaying in front of them. Leshan stands as another treasure of the Sichuan Province waiting for you to be discovered.