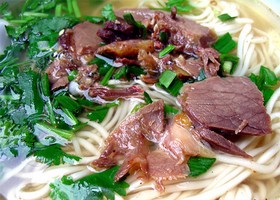 In Lanzhou, you can find different types of hotels and restaurants spreading in the streets and alleys. It has already collected Sichuan Cuisine, Cantonese Cuisine, shanghai Cuisine and Hunan Cuisine. Combined with other cuisines and ethnic food, Gansu has formed its own special cuisine – Gansu Cuisine, with noodles as main staples. And its meat dishes are profoundly affected by the Hui minority. Jingyang Lou, Yuebin Lou, Emei Chuancai Restaurant and Huicai Restaurant of Lanzhou are called the "Four Famous Restaurants in Lanzhou". In addition, as different nationalities inhabit Lanzhou, there are so many ethnic foods that several snack streets come into being. For instance, Dazhong Lane, Hezheng Road, Nongmin Lane, Jianlan Road are popular. On the way to Zhongchuan Airport stand plenty Hui-flavoured restaurants whose opening hour is extended.

Hand-pulled noodle with beef is the most celebrated as well as the most distinctive snack in Lanzhou, thus enjoying the reputation as "MacDonald in Lanzhou". Hand-pulled noodle with beef was first made by Ma Baozi, a senior of Hui minority. The noodle, famous for its soft meat and refined flour has five features, that is, clear soup, white radish, red oil and green caraway and golden noodle.

Pita bread soaked in lamb soup not only leaves a lasting and pleasant impression on you but can warm your stomach effectively. It needs advanced technique of cooking. Before you have it, you have to break the pita bread into piece, and the smaller it is, the better. The reason for doing so is to make sure the bread can fully absorb the flavour of the lamb soup. Then you could have it cooked by the chef.

Saozi noodle is another famous traditional noodle in Lanzhou city. It is said the noodle was evolved from "Changshou noodle" in Tang Dynasty (617-908), which was treated to guests when it was the birthday of the senior and the child, for "Changshou" in Chinese means longevity. The process of making it is complicated, first mixing mutton, agaric, egg, tofu, garlic bolt together with other seasoning, then kneading dough in water containing soda before rolling it even and cutting it thin, finally cooking. After the exquisite workmanship, the noodle no wonder tastes yummy!