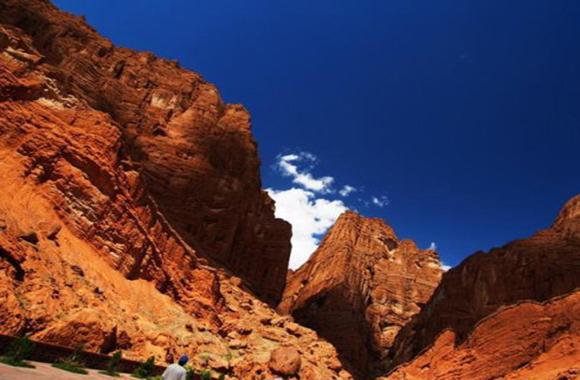 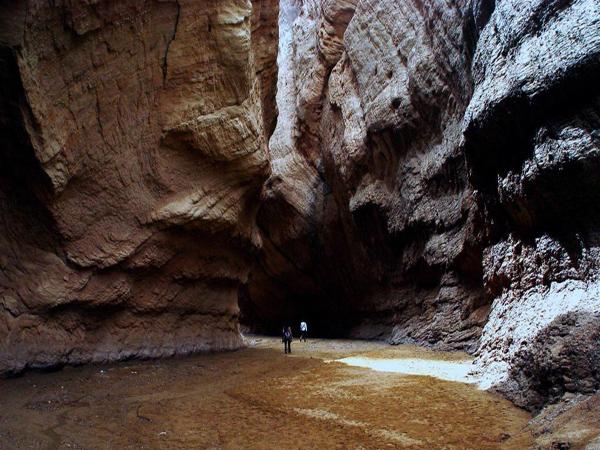 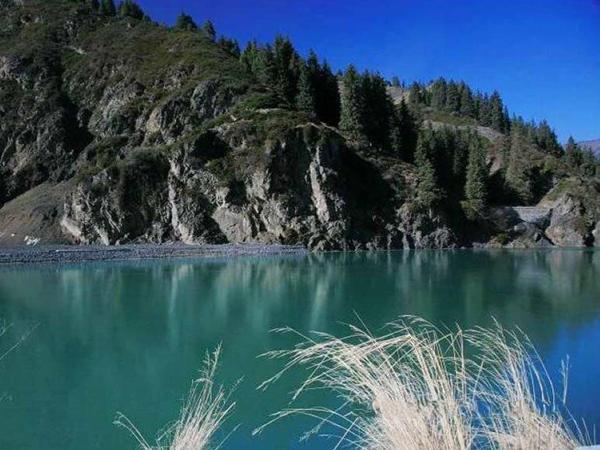 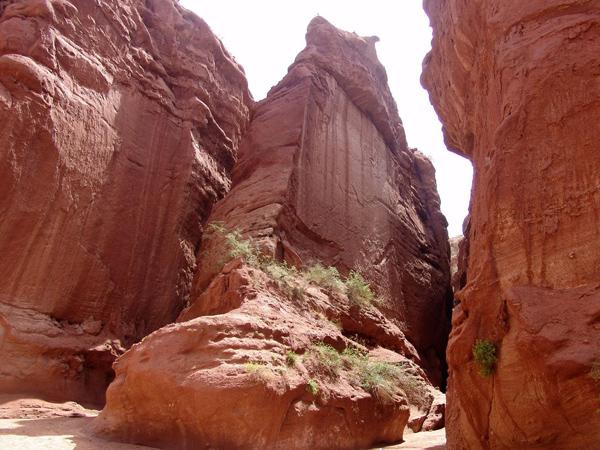 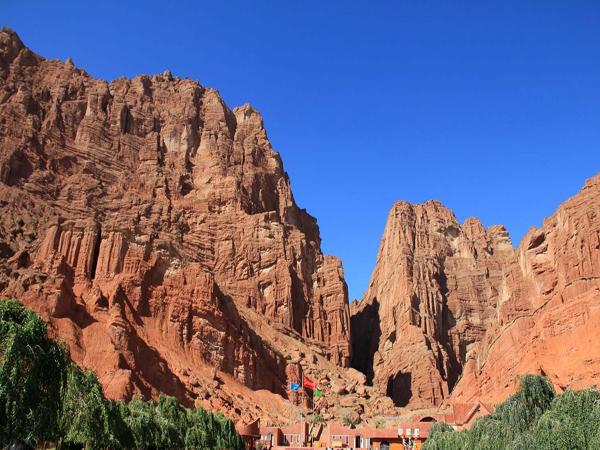 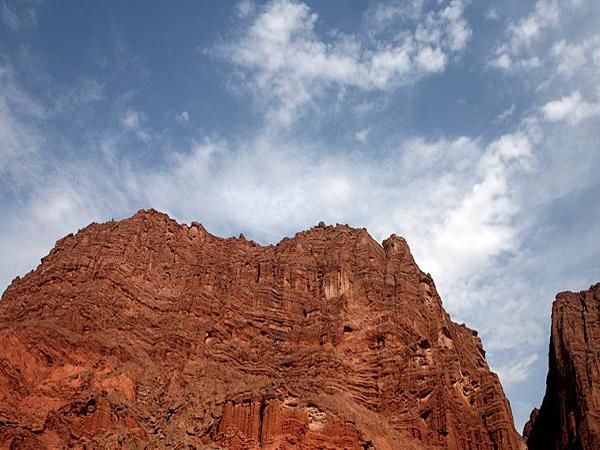 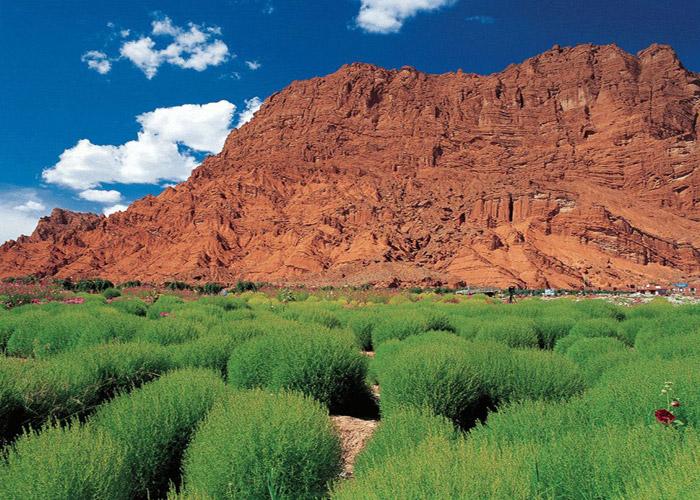 Chinese name: 天山大峡谷 (Tian Shan Da Xia Gu)
Location: 72 kilometres away from the north of Kucha County, Aksu Prefecture, Xinjiang Uygur Autonomous Region; close to China National Highway 217.
Admission fee: 60yuan.
Opening time: 8:00-17:00.
How to get there:
- By coach from Kucha to Dongfeng coal mine. The coach starts from 10:30 and runs five times a day.
- By chartered car. The price ranges from 150yuan to 200yuan.
Best time to visit: September to October.

Situated in the southern foot of Tianshan Mountain, Tianshan Grand Canyon, standing 1,600 metres above sea level, with its highest peak reaching 2,048 metres, is made up of ranges of rufous massifs.  Therefore it is also called Keziliya Grand Canyon which means the red cliff in Uyghur language. Stretching 5.5 kilometres, Tianshan Grand Canyon can be deemed as the rare natural scenic spot across China thanks to aeon-long denudation and scour of torrents. In the sunlight, rufous mountains are burning flames seen from afar. What makes Tianshan Grand Canyon charming is not only its magnificence and precipitousness, but also its tranquility, mysteriousness and serene. 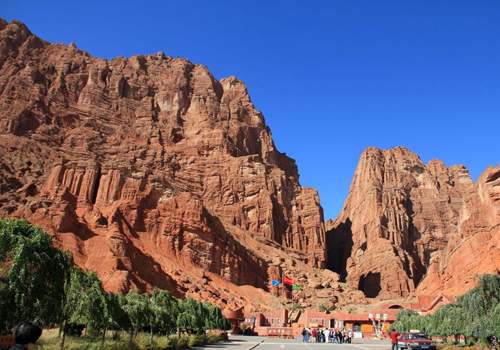 The moment you look up, you will feel dizzy and stifled with the mountains that will fall onto ground at any time. Canyons change as mountains change. Sometimes the space in between is narrow, sometimes wide; the widest is 53 metres, while the narrowest is 0.4 metres! So far, there are forty-two named attractions in the Tianshan Grand Canyon, for instance, Jade Girl Spring, Sky Hole, Treasure-burying Hole and so forth. The most significant part of Tianshan Great Canyon is Thousand-Buddha Grotto, where murals there were so splendid that it could match those contemporary ones in Dunhunag, and the Han culture manifested is so well preserved that makes the grotto unparallel in the ancient western area of China.

In the depth of the canyon, on the top of an 8-metre-tall and 4-metre-wide hole is spring dripping throughout the year. In winter, water freezes, thus forming a huge crystal icicle which weighs about 500 kilogrammes. Every year when it comes to March and April, icicle melts like a graceful girl, hence the name. 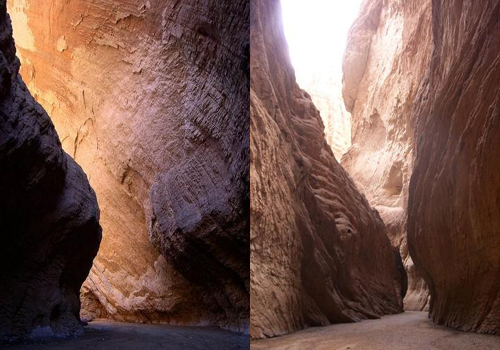 Located on the hundred-tall cliff, the hole embraces holes and soars into the sky. Legend has it that in the Tang Dynasty (618-907), when twelve monks preached from central plains to western regions of China through hard times and reached Quici (an ancient state centered with Kucha), they entered the Great Canyon and Sky Hole while looking for sacred Buddhist mountains before becoming immortals.

When Genghis Khan fought war with the western regions, the kingdom of Qiuci fled with his own fortunes and aristocrats of the Wang’s hid themselves in the large valley and kept their money in this hole before sealing it. The treasure was not discovered until 1960s when two brothers took it away and left nothing but wooden staircases beneath the entrance of the hole. Later, though flows of people coming to seek for treasure found no more holes buring treasure. But what are lucky, sites of smelting copper and iron in Han Dynasty (206 BC - 220) were discovered coincidentally. 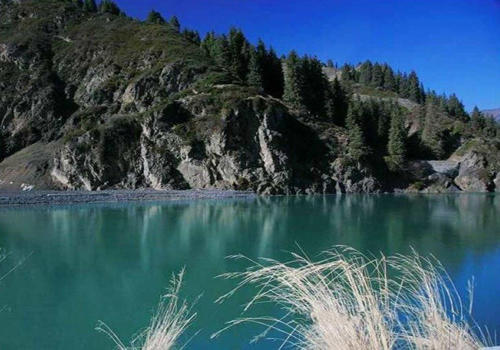 Standing at the foot of Thousand-Buddha Grotto or Qinglong pool, you can always find mysterious mist rising from the bottom whether at dawn or at night. The mist will sometimes assemble gather together to form a ball and ascend along the cliff before disappearing.

On the hanging ladder or flights of steps of Thousand-Buddha Grotto, even in the taverns of the canyon, you can hear footsteps or tap-tap at the door. But in fact, no sound or people are audible or visible!

Close to the entrance to the Tianshan Grand Canyon, there is a protruding black cliff, which resembles a dog, hence the name Sacred Dog Guarding Canyon. Generally, the dog is black, but when it comes to July or August, the dog will turn tawny. In spite of the changing colour, the shape of the dog remains the same. What is extraordinary is that it is the dog when seen from afar, and it is a grotesque cliff. 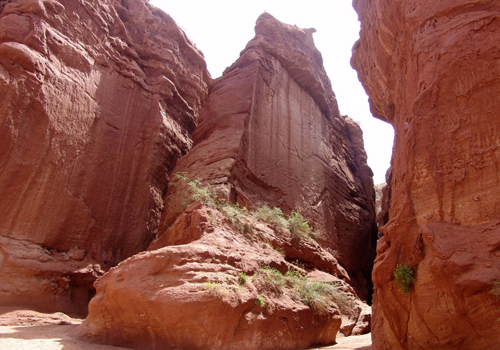 The same phenomenon goes with Lingguang Hole, which lies at the half-way mountain next to the Lying Hump. Looking upward from the sightseeing stand, you can find a fairy with silver dress in the cave dancing elegantly. Surprisingly, if you walk three metres close, the image of the fairy will no longer be visible. The reason may be the joint effect of light and shadow.

While sweltering summer drives people sweaty and tired outside the canyon, it makes people refreshing all over inside, Cresent Valley, Ghost Valley and other attractions in particular. It is so happened not only because of quite a few brooks, little sunshine, deep canyon, but also because of an intermittent gust of wind from different directions.