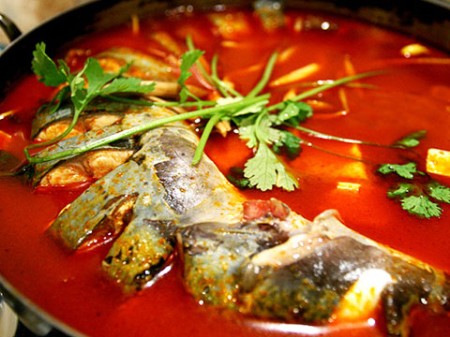 According to the traditional Chinese medicine theory, sour and spicy food can clearing damp. Because of the humid weather in Kaili, Miao and Dong people in Kaili are fond of sour food that most of their dishes are in sour flavor, and they pickle various vegetables and meats in different ways. The most famous dishes are Sour Soup Fish and Pickled Fish.

It is a popular dish among Miao people, which is their appetizing dish with flavors of hot and sour. The main ingredients are chili, tomatoes and fresh fish, and some soybean sprout and fried bamboo shoots also added in. The sour soup is cooked from tomatoes in the special ways of Miao people with the traditional Chinese medicine herb.

It is a traditional food of Dong people in Kaili. Carp is the popular kind to be pickled in clay jar with tomatoes and pepper power for months. It is in unique flavors of sour, hot, salty and sweet, and the flesh of the fish is soft and tasty. Pickled Fish can be enjoyed directly from the jars or after cooking.