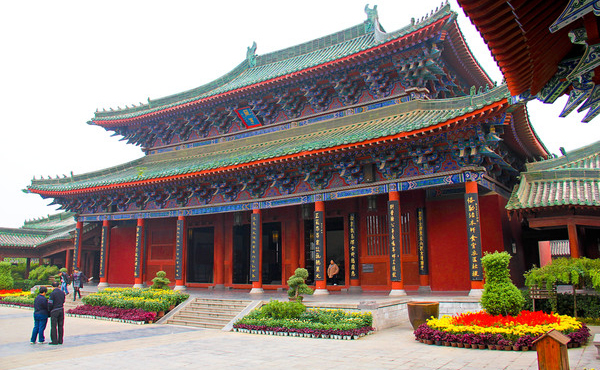 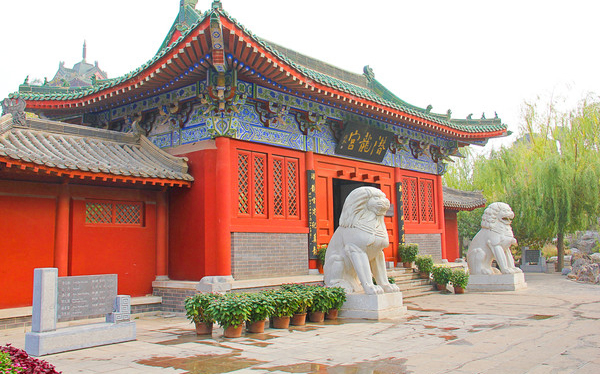 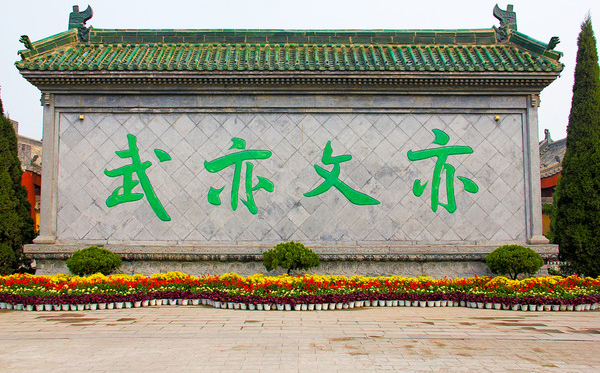 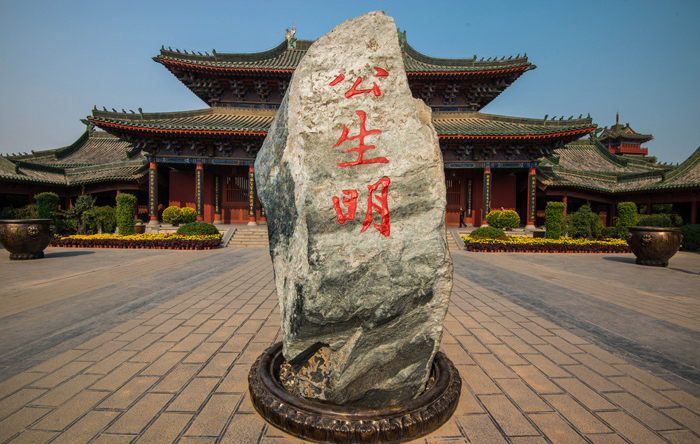 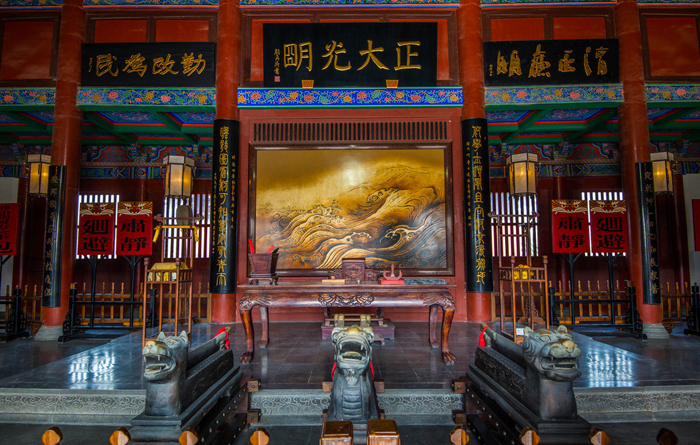 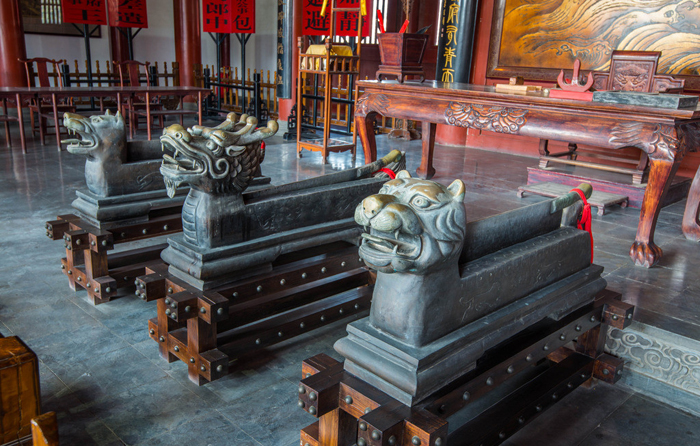 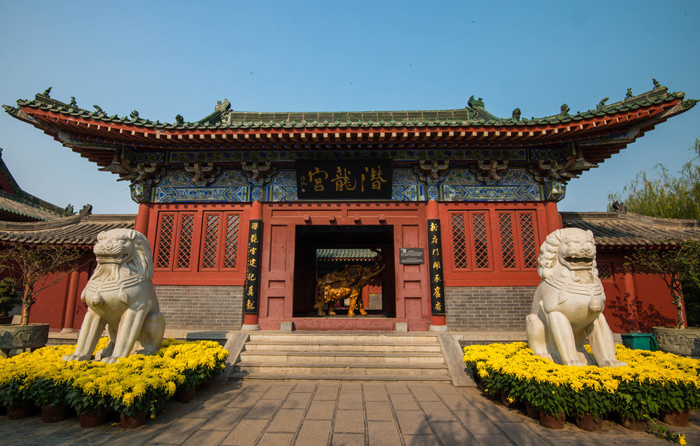 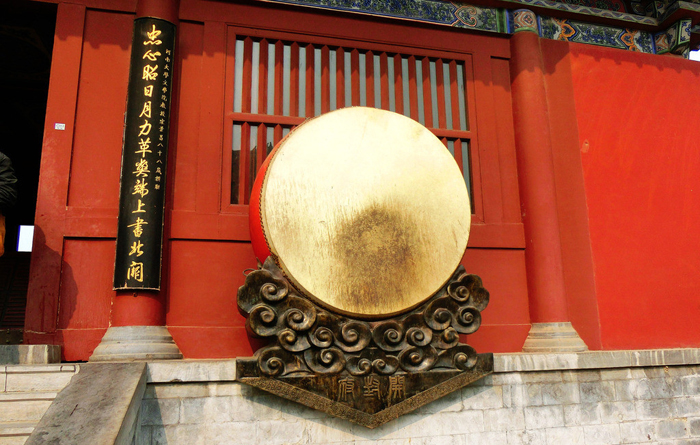 Chinese name: 开封府 (Kai Feng Fu) Location: On the north bank of the East Lake of Baogong Lake, the Yanqing Street, Gulou District, Kaifeng City, Henan Province.
Admission fee: 50yuan.
Opening time: 07:00-19:00.
How to get there: - By bus No.4, 19 and get off at the stop of Kaifeng Fu (开封府, Kaifeng Prefecture);
- By bus No.1, 16, 20 can also arrive there.
Best time to visit: September to October, especially during the Chrysanthemums Festival which begins on October 18th.

Kaifeng was the national hub of politics, economy and culture in the Northern Song Dynasty (960-1127). Kaifeng Prefecture, or Kaifeng Fu had jurisdiction over 17 counties and 24 towns as well as the capital of the country, with 600 government officials in it. So the emperor attached great importance to the appointment of the commanding officer of the prefecture. In the course of the Northern Song Dynasty, Taizong (November 20, 939-May 8, 997), Zhenzong (December 23, 968-March 23, 1022), and Qinzong (May 23, 1100-June 14, 1161) all had taken prefectural magistrates and then ascended the throne of emperor. In addition, a galaxy of statesmen, thinkers, literati and strategists such as Bao Zheng (999-1062, a judge of integreity), Sima Guang (1019-1086, a modest statesman), Su Shi (January 8, 1037-August 24, 1101, an excellent writer) and so forth had assumed the post, too. Due to their great deeds during their tenure of office, culture of integrity and steadfastness, characteristic of Kaifeng Prefecture had been developed. And the healthy trend that "Justice Produces Justice" had been encouraged nationwide. 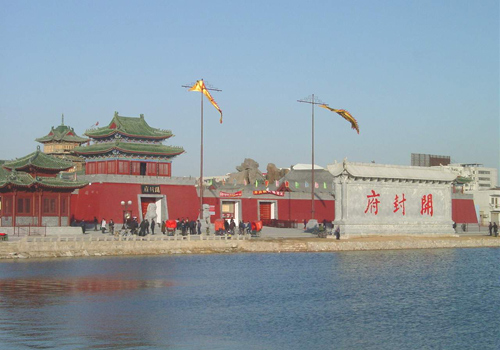 Covering an area of about 9.9 acres, with a floor space of about 3.5 acres, Kaifeng Prefecture Scenic Areas was built on the basis of a canon Building Standard, or Yingzao Fashi finalized in Song Dynasty. Magnificent and imposing architecture in Kaifeng Fu such as Main Hall (Court of Law), Conference Hall, and Meihua Hall (Hall of Plum Blossom) are sited on the centre axis, with 50 plus palaces in the prefecture. According to different themes, Kaifengfu can be divided into ten scenic areas, in which a mix of tranquility and energy can be perceived and valuable documents are displayed. Apart from that, intriguing performances are a must see. In this way can visitors better understand the culture of the Northern Song Dynasty. 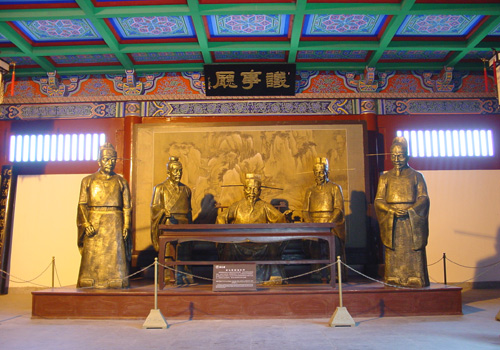 Here, there are placed sundial, water clock, huge time bell, time drum and other exquisite apparatus, all of which not only tell the history of timing in the Northern Song Dynasty but vividly reflect the effects of the then policy that "paying greater attention to civil while suppressing military". For your information, only Northern Song Dynasty adhered to this policy in Chinese history.

Scenic Area of Culture of Prefecture

This scenic area of Kaifengfu encompasses the Court of Law, drums for voicing grievance, and tablets for admonishment. The Court of Law used to be a place for prefectural magistrates to handle cases, in front of which is erected the tablet. Visitors here can find an epigraph on the tablet written by Emperor Taizong of Song Dynasty, and directly experience how Bao Zheng settled a lawsuit.

Scenic Area of Fu Si Xi Prison of Kaifeng Prefecture consists of the Prison Warden House, Death Prison, the Temple of Prison God, Male Prison, Female Prison and the like. Statues, instruments of torture, and scenes reflecting the real circumstances of prisons are all in sight in Fu Si Xi Prison. To some extent, it is the culture of prison in the Song Dynasty in microcosm. 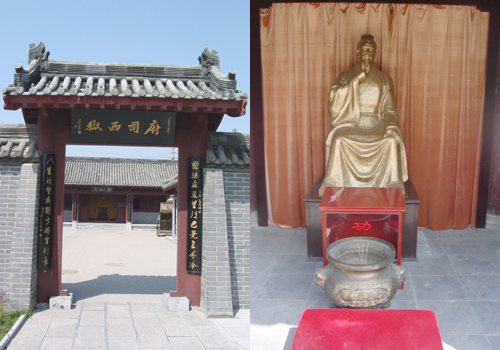 Hall of Plum Blossom is made up of Qi Min Hall and side halls on east and west. Visiting here can help in grasping historical novels concerning Bao Zheng, an upright figure upholding justice. Moreover, his wax statue in the position of handling a case is in sight.

Tian Qing Guan is a pretty luxurious temple, comprising San Qing Palace, You Sheng Palace, and Fu You Palace, each of which respectively is painted with murals related to Taoism. The whole scenic area resembles bagua, or put it in another way, the Eight Diagrams. It is eight combination of three whole or broken lines used in divination by Taoists. All this reflects the prosperity of Taoism at that time.

Drill Ground or Jiao Chang is the venue for grand festivals in Kaifeng Fu. It consists of Martial Arts Arena, arsenal magazine, Valiant Building and other spectacular architecture. Every morning and afternoon fantastic performances are put on here. 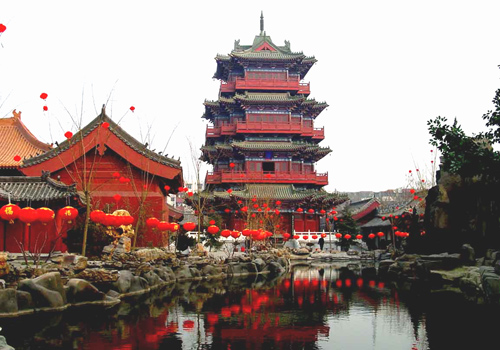 Whenever visitors stroll in the Scenic Area of Entertainment, they can appreciate the beauty of Crescent Hill (Xianyue Hill) and Bright Mirror Lake (Ming Jing Lake). Standing in the Fangong Pavilion and hearing long-drawn-out sound will call forth a feeling of living in an ancient time.

Scenic Area of Culture of Emperor

In the Northern Song Dynasty, imperial examination temporal lecture and rally were held here. Kui Xing, also known as Great Master Kui is enshrined there, for it is a god of examination in Chinese mythology.

Qingxin Building, or Qingxin Lou is the place that recounts culture of prefectural magistrates. It also boasts the largest bronze statue of Bao Zheng, or Baogong, symbolic of integrity and justice in the eyes of Chinese people. 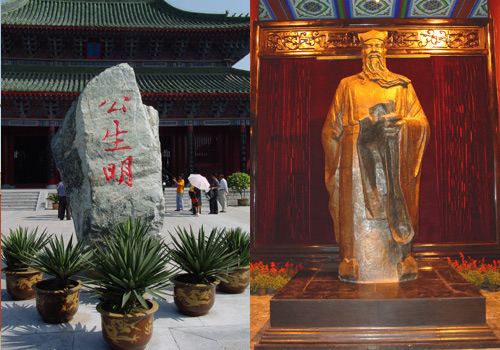 If there is any change, please refer to the on-site schedule.