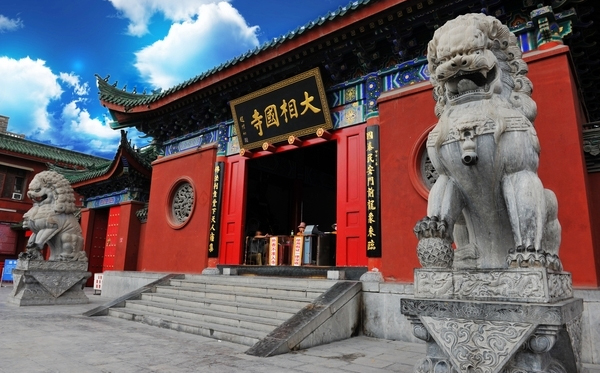 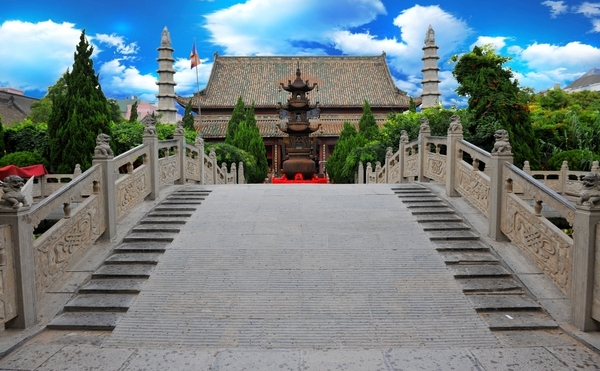 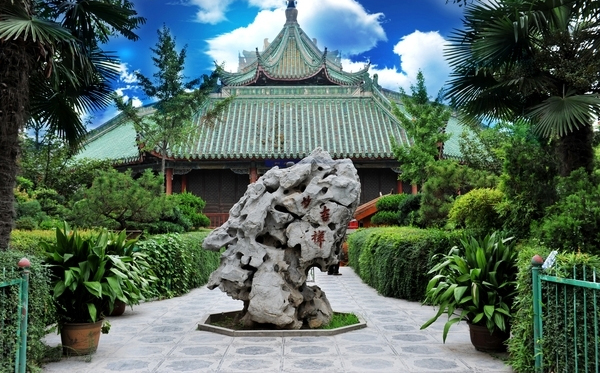 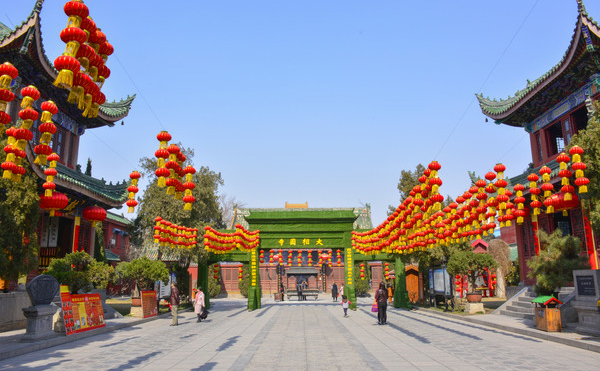 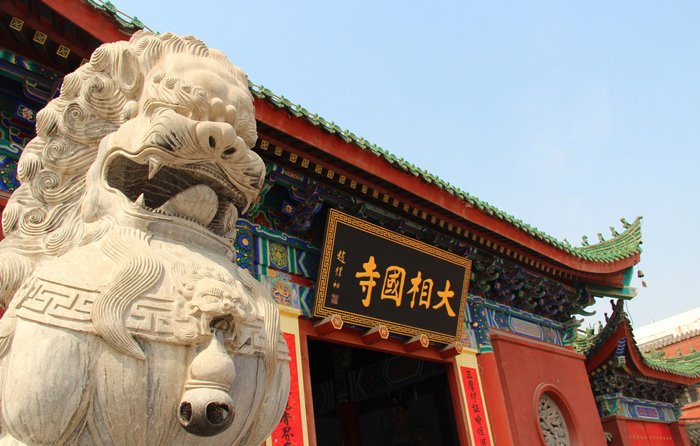 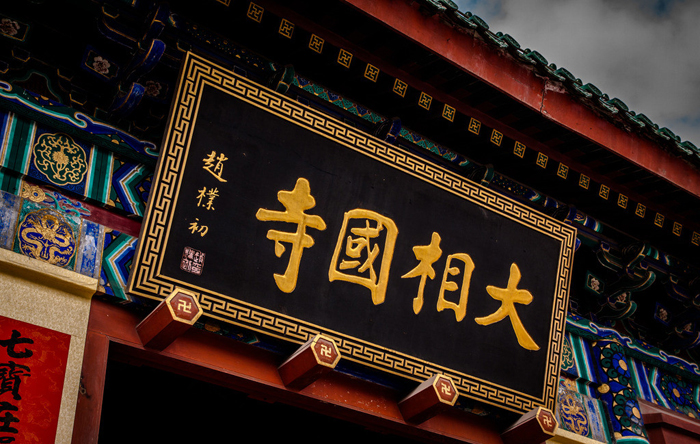 The Grand Xiangguo Monastery was originally built in 555 during Northern Qi Dynasty (550-577) on the base of the residence of Xinlingjun, who was a prince of the Wei Kingdom during the Warring States Period (220 -280) in ancient China.

The monastery was damaged by wars and fire and then was re-built in 711 during Tang Dynasty (618-907), named Jian'guo Monsnatery. In 712, Emperor Tangruizong granted the monastery a plaque with the name of "Grand Xiangguo Monastery" on it in honour of his inheriting the throne. In Tang Dynasty, the monastery was not only a religious occasion site but also a small art museum where many famous murals, paintings and statues produced by renowned Chinese artists were collected. Moreover, the monastery was also the place for the exchange of Chinese and foreign cultures. Konghai, a famous Japanese monk, once lived in the Grand Xaingguo Monastery and studied Buddhist doctrine and Chinese characters. His stay there gave him a hand in creating the hiragana, which were inspired from Chinese characters and are still used in Japanese to this day. 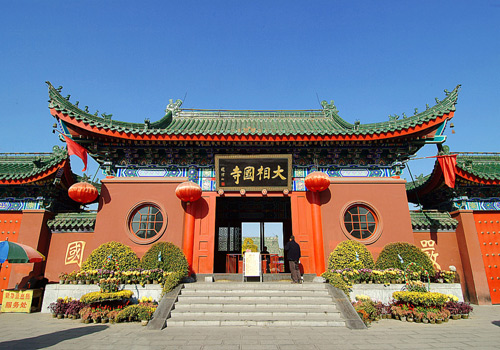 In Song Dynasty, the Grand Xiangguo Monastery was conferred the title of "imperial monastery". When it was the Northern Song Dynasty (960-1127), the monastery stepped into its most prosperous period. Emperor Songtaizu, the founder of the dynasty, ordered to decorate it with 500 bronze arhats transported from the Donglin Temple at the piedmont of Mt. Lushan. At the last few years of 10th century, another large-scaled extension and arrangement were done to the monastery by the dynasty, and more art works were stored there. Furthermore, every month as many as ten thousands of people gathered for temple fairs, which were held about every 6 days. Some descriptions about the activities at the fairs such as acrobatics and opera can be found in some historical data. As the national and international center of Buddhism in China at that time, more foreign envoys and monks came to the Grand Xiangguo Monastery for visit and study. Manjushri, a prince in ancient India who later became a monk, had his experiences and the grand occasion of the monastery written in his work; Choi Sixun and his fellows, who were from ancient Korea, came to the monastery to study the murals and carried the copies of the murals back to their country. 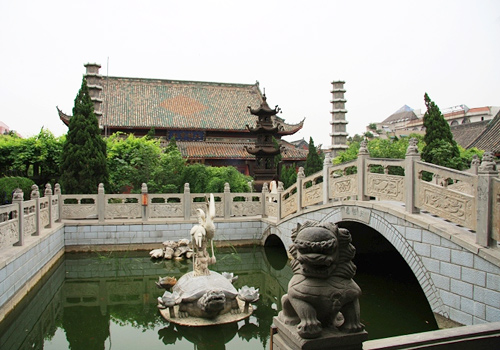 In the dynasties after the Northern Song Dynasty, the Grand Xiangguo Monastery suffered from grave destroys and was at a low ebb. The situation lasted until Ming Dynasty (1368-1644), the founder (Zhu Yuanzhang) of which was a monk before he gained the throne. During his reign, the monastery was repaired for several times, but it was renamed to be "Chongfa Monastery" by Zhu's offspring in 1474.

In 1642, a big flood from the Yellow River damaged the monastery and it was not re-constructed until 1766 when it was Qing Dynasty (1644-1911). In 1746, a big repair project conduted by Emperor Qianlong was started, which lasted for two years and seven months and made great to the recovery of the monastery. Unpredictably, the Grand Xiangguo Monastery was attacked by the Yellow River once again and it almost became a ruin.

In 1993, the Lingshan Temple of Singapore presented the monastery with the sarira of Sakyamuni (founder of Buddhism), which is now still enshrined there. All the figures of Buddhas in every hall of the monastery are perfect in workmanship and seen as the gem among their analogues in China.

- The Gate
The main gate of Grand Xiangguo Monastery was first built at the beginning of the 18th century but was damaged in wars. The current one is an arch-like building constructed in the middle of the 20th century, with a pair of stone lions guarding at front of it.

- The Bell Tower and Drum Tower 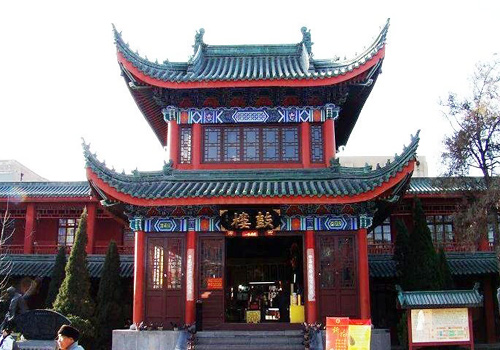 The Bell Tower and Drum Tower were rebuilt in 1992. The bronze bell hanging inside the Bell Tower is a survival made during the reign of Emperor Qianlong, Qing Dynasty. The bell is 5 tons in weight, 2.23 meters in height and 1.81 meters in diameter. It can produced a clear tone when hit and it is said that people can hear it even at a far corner of Kaifeng City, hence the "bell tone of the Grand Xiangguo Monastery" is hailed as one of the top eight sceneries in Kaifeng.

- The Hall of Heavenly King
The hall was constructed during the reign of Emperor Qianlong (1711-1799) of Qing Dynasty (1644-1911). The roof of the hall is covered with green glazed tiles and the inscription was written by Mr. Zhao Puchu (1907-2000), a famous leader of Buddhism, calligrapher and social activist of China.

- The Hall of Mahavira
Just commonly like that in other Buddhist temples, the Hall of Mahavira is the main hall of the Grand Xiangguo Monastery. This 13-meter-high hall was completed in the reign (1643-1661) of Emperor Shunzhi (1638-1661), hailed as "the first hall in Central China". Surrounded by white-stone railings with exquisitely carved 58 lions, the hall enshrines the huge statues of Sakyamuni, Amitabha, Bhaisajyaguru, Buddhism Goddess of South Sea and "the eighteen arhats".

- The Hall of Arhats 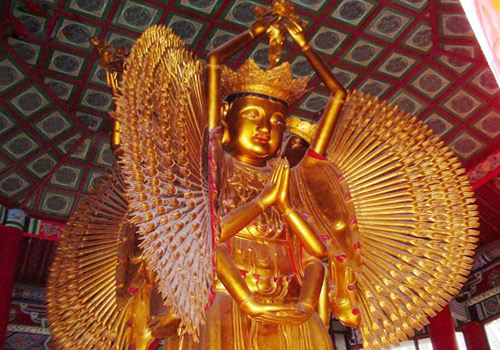 Covering some 828 square meters, the Hall of Arhats is an octagonal green-glaze-roof building constructed when Emperor Qianlong ruled, made up of three structures. Inside the central pavilion stands a huge and exquisite four-sided thousand-handed and thousand-eyed Guanyin (Avalokitesvara), which was sculptured from an entire maidenhair tree by an unknown folk artist. It cost 58 years to finish this over 3-meter-high and some 2000 kg masterpiece. The four sides of the are of a same appearance, with six big hands and many small hands on each side, on each hand there is an eye, 1048 ones in total. Its peculiarity makes it "the treasure of the Grand Xiangguo Monastery".

- The Depositary of Buddhist Sutras
It is a two-storey building where Buddhist sutras are stored. It was built in the reign of Emperor Kangxi (1654-1722) of Qing Dynasty with an area of around 680 square meters, over 20 meters high. The ridges of the building are decorated with glazed lions and wind bells. The seal characters on the plaque hung on the first floor is said to be the handwriting of Sun Yanxing, a famous calligrapher living in Qing Dynasty.

- The Hall Of Master
To the west side of the Depositary of Buddhist Sutras locates the Hall of Master, or Memorial Hall of Master Konghai, in front of which stands a monument and a rare pair of stone carvings. Inside the hall, a huge bronze statue of the master and his experience and pictures in his life are exhibited.