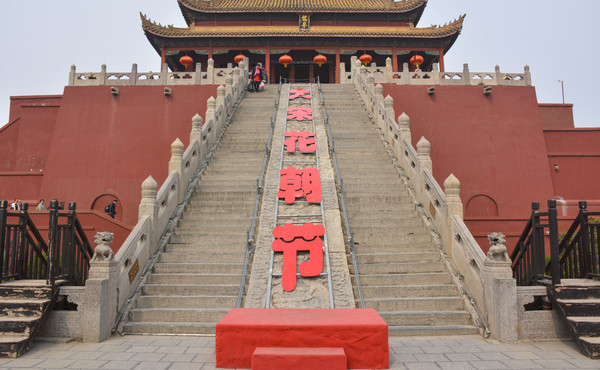 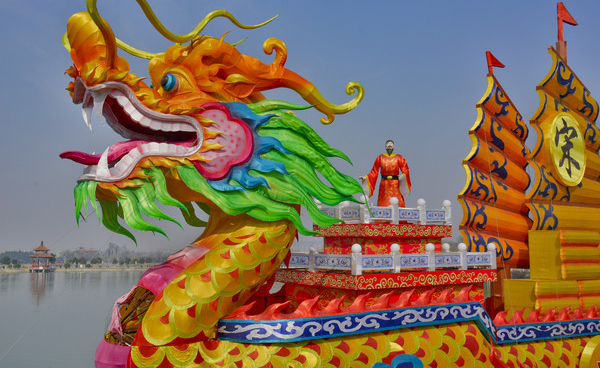 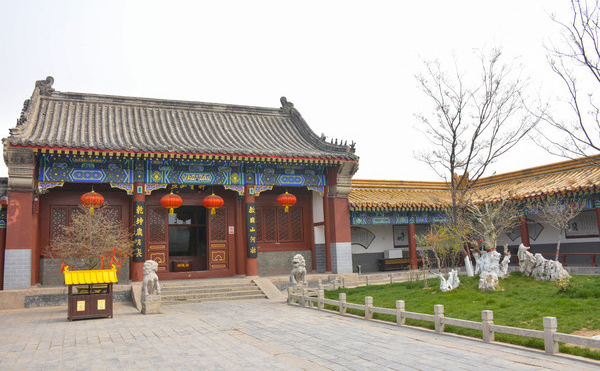 Dragon Pavilion, or Long Ting (龙亭) in Chinese, is a AAAA national scenic spot known for its rich historical relic and beautiful natural landscape worth a visit in Kaifeng City, Henan Province.

As one of six famous ancient imperial cities of China, Kaifeng reached up to its heyday as the capital of the prosperous Northern Song Dynasty (960-1279) for 167 years in ancient China. When the power of the subsequent Yuan Dynasty (1279-1368) invaded the city, most of the palaces of Northern Song Dynasty were burnt down, and the levee failure of the Yellow River gave rise to more destroy, which made the majestic imperial constructions ruins. 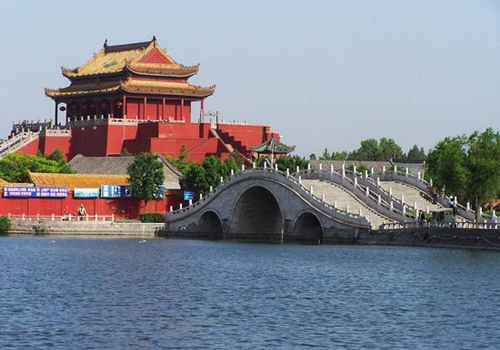 Dragon Pavilion was built in 780AD, the park and palace have been through five dynasties, the palace has changed somewhat with change due to different emperors living there over thousands of years. The palace, and the surrounding sights became a park in 1925. It was originally name Zhongshan Park, and was later officially renamed Longting Park in 1935. The park covers an area of 1038 acres; the park is surrounded on three sides by water, and absolutely stunning sights.

The Park holds a chrysanthemum festival every year, when autumn comes around. This festival has taken place since the early Song Dynasty, and spread through the Ming (1368-1644) and Qing (1644-1911) dynasties. The area is rich with history and culture. Every year when autumn arrives the parks 1,000 types of chrysanthemums open, the scenery of the flowers opening attracts visitors from both near and far.

About Dragon Pavilion of Kaifeng

The Dragon Pavilion sits high above the ground on a platform, they’re 72 steps leading up to this magnificent building. There are extravagant carvings of dragons leading the way; the main hall is built from wood, in the amazing typical Chinese architecture form. The main hall is 26.7 meters high, 19.10 meters wide east-west 11.9 meters north south. The roof is painted with flowers, and dragons (very China). Inside the main hall are main old relics. In front of the Dragon Pavilion is a big road, to the east and west of the road are two lakes, to the east, East Pan Lake, and to the West, West Yang Lake. The two lakes are named for a traitor, and a loyal man who gave his life for his country. The east is for the traitor who died in the water, and the west for the patriotic martyr. The Road in front of the pavilion is lined with shops, selling trinkets such as paintings, coins, and old china kind of stuff.

This is truly an amazing place, and should definitely be on your list of things to see in Henan. The view from the top of this Pavilion is to die for.

What to see in the Dragon Pavilion Park? 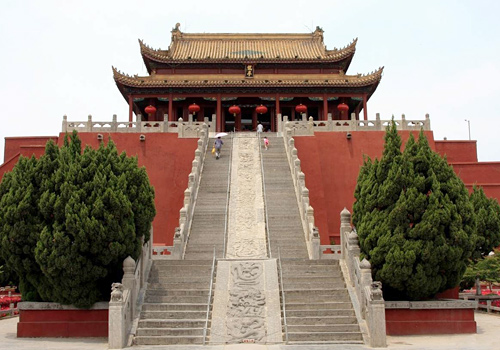 The Dragon Pavilion is in fact not a "pavilion" but a traditional Chinese palace-like building constructed on a 13-meter-high black-bricked stylobate with white-stone handrail, 36 zhang (丈, a Chinese unit of length, 1 zhang = 3 1/3 meters) away from the ground with 72 stairs, which symbolize the 36 Tianggang stars and the 72 Disha stars of the Big Dipper according to Chinese Taoist theory. The stairs leading to the base of Dragon Pavilion is also surrounded with white-stone handrail and the middle is carved with flying dragons on cloud, which are commonly seen in Chinese imperial palaces.

On the west side of the Dragon Pavilion there are several side-halls, which are now function as a wax work museum, reflecting the politics, economy, culture, diplomacy, science and technology of Northern Song Dynasty by nine groups of wax statues. All of the complexion, hair, dress, adornment of the waxen historical personages are made according to strict textual criticism so that the scenes would be as real as possible. 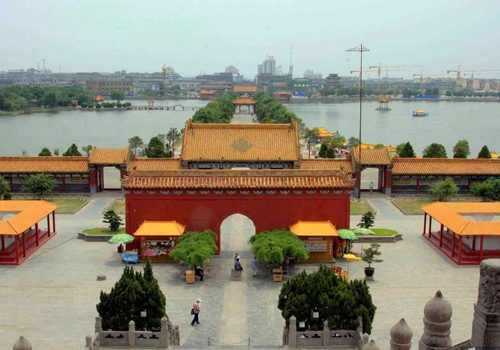 Botanical Garden
The botanical garden is behind the Dragon Pavilion, it covers an area of 7.8 acres, with juniper, Platycladus Orientalis, along with a lot of other plants and animals. They’re also plant’s formed like planes, trains, journey to the west, dragons, Chinese zodiac animals (all twelve of them), and many other things. Let’s face it who doesn’t want to kiss a dragon or tickle a monkey’s chin, when you’re in the botanical garden take some fun photos.

Bonsai Garden
This area is all planted plants. Many of them are bonsais, many of them are shaped into different animals, people, and other things. Take sometime to admire the workmanship put into these plants, the expressions, the talent needed to nourish these plants.

Ancient Court
This ancient court is found on an island in the middle of the east pan lake. There are many legends, and stories surrounding this island. When you go there you’ll find mystery and beauty.

Dongxi Room
This area has five rooms all oriented north and south. Three rooms are open to the public. Every thing is symmetrical; this place possesses a type of simple elegance.

Screen Wall
This screen wall is found between the Dragon Pavilion and Zhao Men, it is 7.36 meters high, and 19 meters wide. It is the screen door to the pavilion; take a lot of pictures of this.

Song Hu
Song Hu is an ingeniously built little palace between Wu Men and Zhao Men. This is where the Emperor would come to pray for longevity. It’s constructed in different layers, and gives tourist a sense of a castle in the sky. The way it’s constructed is worth thinking about, truly impressive.

Jade Bridge
The bridge is 40 meters long, and 18 meters wide. The bridge is called Jade Bridge because it has ripple affect to it, so in the sun it looks like jade.