Jiayuguan is named after the west starting point of the Great Wall of Ming Dynasty - Jiayuguan. As one of the twelve prefecture-level cities in Gansu, is situated in the northwestern part of the province and the middle of Hexi Corridor. It is bordering Jiuquan city, a place of strategic importance in the east, 776 kilometres away from the provincial capital Lanzhou city, Yumen city, an oil city in the west, 650 kilometres away from Hami city of Xinjiang Uygur Autonomous Region, Qilian Mountain and Sunan Yugur Autonomous County in the south, over 300 kilometres away from Qinghai province. The city, standing 1412-2722 metres above the sea level, has varied landscapes. In the middle and the west is Gobi, where downtown and industrial enterprises are sited; in the southeast and southwest is oasis which is good for agricultural region development. In the year of 1992, it was one of the 36 well-to-do cities of the first batch in China and later was awarded "National Hygienic City", "National Civilize City", "Top Tourist City of China" and any other titles. 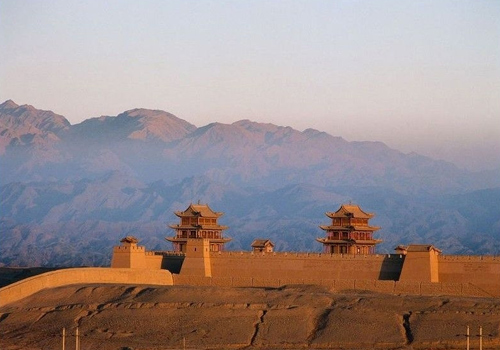 Due to its ideal location – next to Qilian Mountain in the south, Longshou Mountain and Mabin Mountain in the north, Jiayuguan had always been garrisoned by troops since Qin Dynasty (221-206 B.C). Its towering and magnificent Jiayuguan Pass, together with Shanhai Pass in Qinhuangdao, Hebei province, is well known all over the world. In the past, Jiayuguan used to be a vital communications hub; meanwhile, it remains to be the west starting point of the Great Wall of Ming dynasty (1368-1644). So it had, on one hand, recorded the history of the mutual interaction between China and the western world in terms of economy and culture two thousands years ago; on the other hand, it has seen the warfare against enemies. It is in Jiayuguan that culture of Chinese Silk Road and that of the Great Wall meet, thus making the city known as a place of strategic importance of Hexi Corridor and of border area. 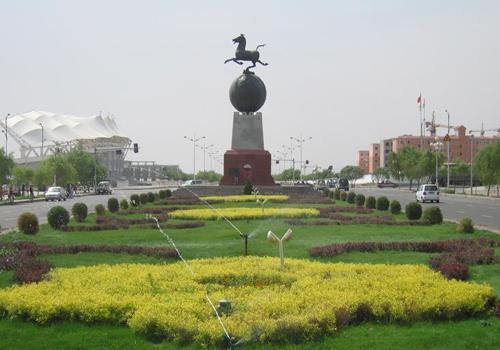 The old Silk Road, pure white glacier and boundless Gobi contribute to different types of tourism resources in Jiayuguan. Many a historical site and invaluable cultural relic are in sight. Furthermore, the first museum in China – The Great Wall Museum that comprehensively and systematically displays the culture of the Great Wall is located here. No wonder travelers tend to be awed by the city steeped in a heritage of ancient civilization. In the meantime, that Jiayuguan is a notable City of Steel in Gobi is attributed to the Gansu Jiu Steel Group, a biggest iron and steel complex in northwestern China. After 40-year development at a good clip, especially since the reform and opening-up policy has been carried out, Jiayuguan has made headway in economy, with metallurgical industry dominating, businesses and tourism supporting. As the burgeoning industrial city, Jiayuguan is now creating its brilliant future so that travelers can have a taste of dynamic and grandeur.