Jian Shui is located in the southern part of Yunnan on the northern bank of the Red River, this broad temperate area was inhabited as early as the Palaeolithic period, and this ancient township is historically renowned for its sugar-cane production. Agricultural Artefacts such as axes and ploughs have been unearthed in Jian Shui to suggest that it was already a highly developed agricultural society before many other parts of South China, in a small rural community local outside of Jian Shui Shi bronze ware was also discovered again seemingly suggesting that this was one of the most advanced and developed regions in Southern China. 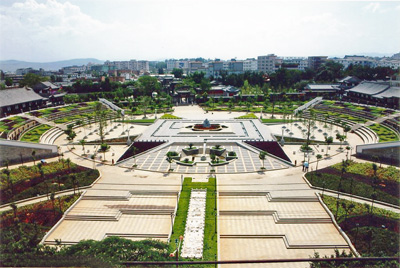 As with many developed cities in ancient China Jian Shui has a high developed education system with many important and provincially renowned schools and institutions acting as its backbone. This commitment to high educational standards was first developed during the early Yuan Dynasty with several schools for those wishing to become officials, this was further built upon during the Ming and Qing Dynasties with new colleges and universities creating to ensure that aspiring scholars had the best chance to reach their potential. During this time the province of Yunnan had a large representation within the imperial court as so many scholars passed the imperial exam.

The region surrounding Jian Shui Shi is mountainous and inaccessible with mighty peaks and deep crevasses within an area of 30kms the landscape dips over 2000 meters creating truly remarkable contrasts. The temperature also fluctuates wildly varying up to 15 degrees over a 30km area, from dense humid subtropics to dry open plains the South of Yunnan is truly offers a microcosm of all that China has to offer.


The region is also dotted with amazing vast underground limestone caves, so big that mountains have literally grown up inside them, underground Karst formations have formed through thousands of years of erosion and the build of limestone. Many of the ethnic minorities that inhabit South Yunnan worship these underground structures as being mystical and created by a divine deity.