Capital Cities and Tombs of the Ancient Koguryo Kingdom

Chinese name: 高句丽王城、王陵及贵族墓葬 (Gaogouli Wangcheng Wangling Ji Guizu Muzang)
Location: in Ji’an City, Jilin Province.
Admission fee: 40 yuan for adults; 20 yuan for children.
Opening time: 08:30-18:00.
How to get there: - There is no nonstop bus to bring visitors to the scenic spot, so visitors can reach there by taxi or by charted bus.
Best time to visit: July and August.

Introduction to Capital Cities and Tombs of the Ancient Koguryo Kingdom 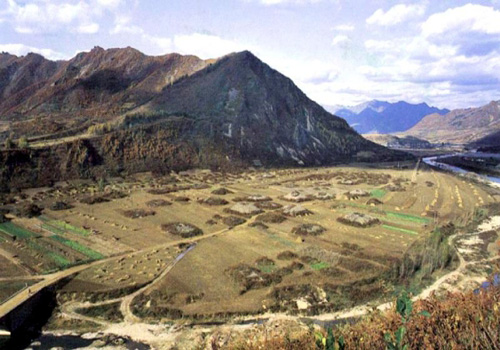 Koguryo kingdom reigning from 37 B.C to 668 A.D, was one of the influential political powers of ethnic minority in northeast China and had played an important role in the history development of Northeast Asia. The kingdom commenced in Huanren County, Liaoning province and then moved to Ji’an city, then to Pyongyang. So, Huanren and Koguryo were the hubs of the kingdom’s politics, economy and culture. No wonder travelers can find most of the relics of Koguryo in this area. In the year of 2004, Capital Cities and Tombs of the Ancient Koguryo Kingdom were designated as the World Heritage Site by UNESCO, qualifying five of the six criteria of the cultural heritage sites. In accordance with the committee, on the one hand, it is the gem of human’s creativity and wisdom and reflects the impact of the Han nationality on any others in terms of unique murals. On the other hand, despite the disappearance of Koguryo kingdom, the cities and tombs it had constructed by stone, clay and other materials have exerted profound influence on later generations. Since 1990s Chinese archaeologists have excavated many cities and tombs of Koguryo kingdom in Ji’an and Huanren and have repaired part of those subject to natural damages. Since then, rich culture of Koguryo kingdom has unfolded before people’s eyes.

Of the three cities, Wunv Mountain City was the first one built by Koguryo kingdom in southeast China. As the earliest one among over hundred mountain cities along the Yalu River, it is imposing, complete and well-preserved. Within the city lie quite a few significant relics of architecture, and historical remains of military and life. The structure of the city followed that of the traditions used by nationalities in the north, but it differed from them in terms of site selection, layout, stone processing and ways of building walls. It was so innovate that the outstanding mountain city had become a breakthrough and a sign of architecture in northeast China and northeast Asia as a whole. As a milestone, Wunv Mountain City had witnessed the expansion of the Koguryo for more than seven hundred years, during which distinct culture came into being. 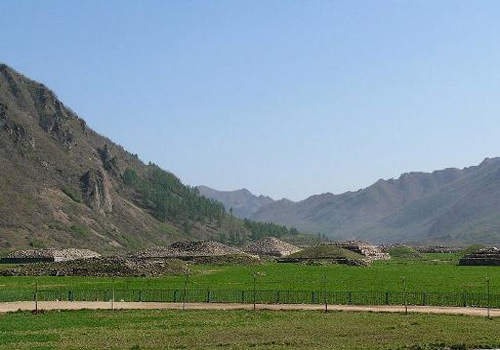 Guonei City and Wandu Mountain City were both the capital cities of Koguryo around one century to five century. The specialty of them is that the plain city and the mountainous city, dependent on one another, formed the capital together. Of the city sites of the Middle Ages of northeast Asia, Guonei City and Wandu Mountain City are masterpieces, for Guonei City is one of the few plain cities with remaining stone walls which are still solid, magnificent and pleasant to the eyes, while Wandu Mountain City enjoys reasonable and ingenious layout, vividly manifesting the combination of natural landscape and human creativity. Excavation reveals that both of the cities were the Koguryo capitals of the longest use, from which we can tell the splendid civilization of Koguryo kingdom once falling into oblivion in the history.

Tombs of the Ancient Koguryo Kingdom

Outside the capital cities, on the plains exists seven thousand ancient tombs of Koguryo period – complex of Donggou ancient tombs – the top of the ancient tombs in northeast Asia. Not only does it indirectly show us the development of Koguryo, but also it is a treasure of culture and art left by the kingdom. General Grave, Taiwang tomb, representative of large-scale Koguryo imperial and noble families and a pyramid of wall paintings were the epitome of architectural feats and art achievements of Koguryo kingdom. Haotaiwang tablet, standing on the east side of Taiwang tomb, records the longest document of Koguryo so far. 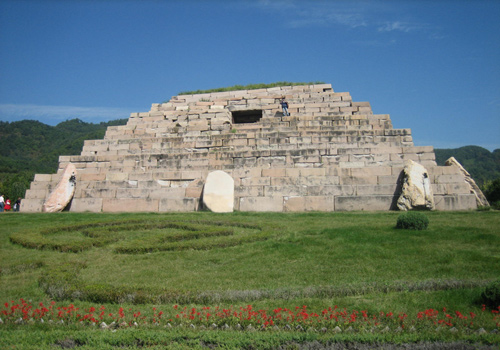 Located at the foot of Longjiao Mountain four miles away from northeast Ji’an city, General Grave was said to be the grave of Changshouwang. It is also acclaimed as Oriental Pyramid because of its resemblance to the tomb of Pharaoh. 31 metres long, 12 metres tall, this seven-staircase grave reaches the peak of architectural feats in Koguryo.

Not far away from the General Grave stands Taiwang Tomb, on whose east side is the Orient Tablet – Haotaiwang Tablet, erected in memory of the nineteenth king Yongle Taiwang. Six metres tall, the tablet recording the lifetime exploits of Haotaiwang, and the origin and building of Koguryo kingdom, is the longest document well-preserved so far.