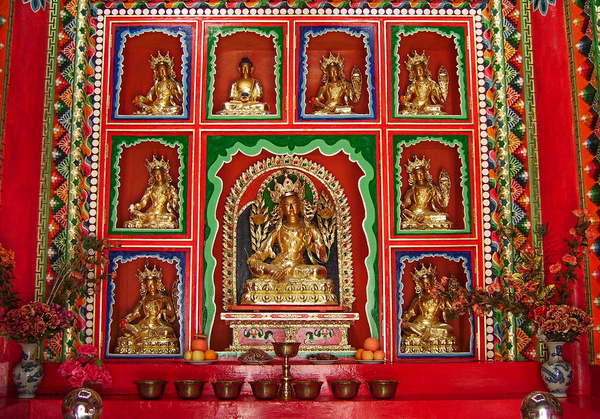 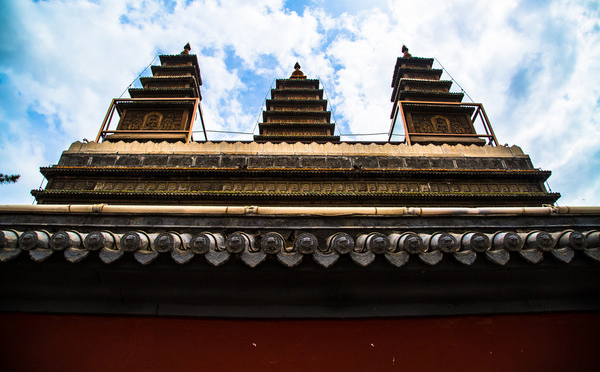 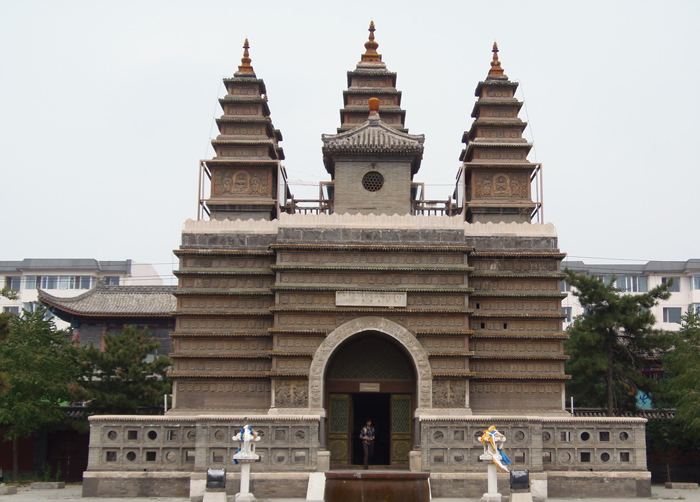 Chinese name: 五塔寺 (Wu Ta Si) Location: Located in the old city of Hohhot, Inner Mongolia Autonomous Region, northwest China. Opening time: 09:00 - 18:00 Entrance fee: CNY35
How to get there: The temple is just to the south of Renmin Park (人民公园). You can take bus No.1 or take a taxi to go to there. Best time for visit: All the year around. Five-Pagoda Temple Travel tips:       - Tourists can climb to the top of the Buddha's warrior seat to have a look at the pagodas and it is worthy to head to the north of the building where there is a carved screen includes a rare Mongolian astronomical map.

Five-Pagoda Temple, which is also known as Jin Gang Zuo She Li Bao Ta (金刚座舍利宝塔), is located in the old city of Hohhot, Inner Mongolia Autonomous Region, northwest China. The design of the Five-Pagoda Temple in Hohhot belongs to the special "diamond throne" pagoda style of Indian Buddhist architecture. It is a copy of the Gaya Temple in India. The Five-Pagoda Temple is an important Tibetan Buddhist temple, which has been viewed as the symbol of Inner Mongolian right now. The temple is a massive structure that looks more like a mausoleum with five minaret-like pagodas atop it than a pagoda or a temple. There are five exquisite quadrangle pagodas built on top of the Buddha's warrior seat, hence the name Five-Pagoda Temple come out. The temple is a well-known scenic spot in Hohhot, which has been listed as a national historical site in 1988.

The History of Five-Pagoda Temple 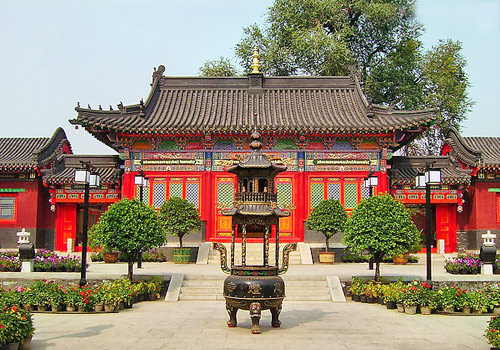 Five-Pagoda Temple was built during the rein of Emperor Yongzheng (1722-1735) of Qing Dynasty (1644-1911). The construction of the Five-Pagoda Temple in Hohhot began in 1727, and was finished in 1732. Originally the temple was a holy place for the followers and monks to worship and pilgrimage, which is a part of a larger complex, the Cideng Temple (慈灯寺) in Qing Dynasty. As the time passed, the structures in Cideng Temple collapsed one by one and only the five-pagoda remained. So the temple got its present name, Five-Pagoda Temple. Nowadays the temple, which is surrounded by a large, concrete yard, and a number of small shops selling postcards, incense and various Buddhist oddities, is not only the sacred place for the monks, but also a popular and famous tourist attractions for the visitors home and abroad. 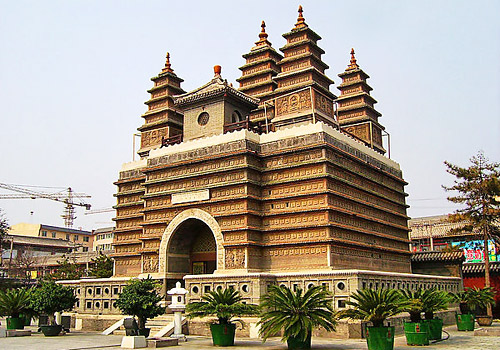 On the first floor of pagodas are brick carvings of Buddha, the Bodhisattva and Bodhi trees, while on the floors above are a great number of special niches for statues of Buddha in varying sizes and shapes, totalling an impressive 1563 in all. On the northern wall of the pagoda are 3 liner carved pictures. The one in the center is a map of the distribution of Xumi Mountain. The one to the right refers to "reincarnation into six kinds of beings" and the one to the left is the astronomical map of more than 1,550 stars with explanation in Mongolian. This map is of great value both in scientific and historic studies. Compared with other pagodas, Five-Pagoda Temple is unique in at least two aspects: its special structure, pagodas over pagoda, and the green and yellow colored glazes on the short eaves and tops of pagodas. The two unique features make the Five-Pagoda Temple quite special and the temple has become a huge treasure of Hohhot City.

The base of pagoda is about 1 meter high and the Buddha's warrior seat is the middle part of the temple. The waist of the Buddha’s warrior seat is carved with various patterns and pictures such as lions, elephants, golden-wing birds, vajra and magic wheel. Above the waist of the Buddha's warrior seat, it has 7 layers in all: the first floor is inlayed with inscriptions of Diamond Sutra written in Mongolian, Tibetan and Sanskrit which are written in graceful line and carved exquisitely. From the second floor to the seventh eave, there are 1,119 gold-plating Buddha statues in various gestures. The statues' sizes are almost the same, while the appearances are different with each other. However, all faces of the statues are smiling auspiciously.