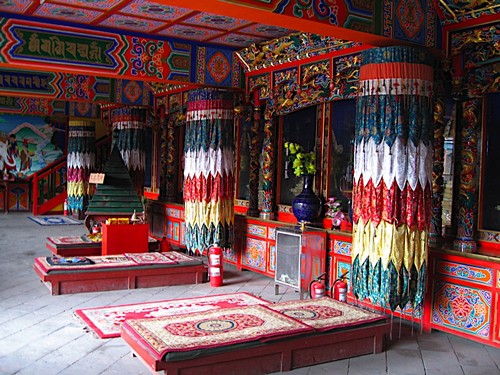 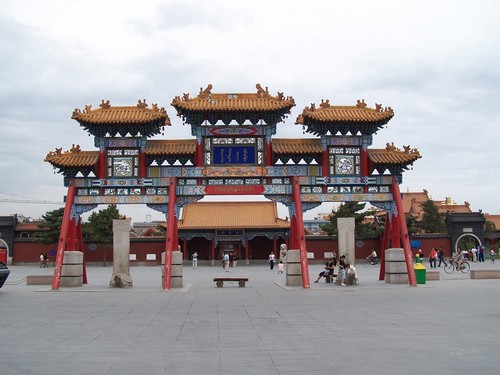 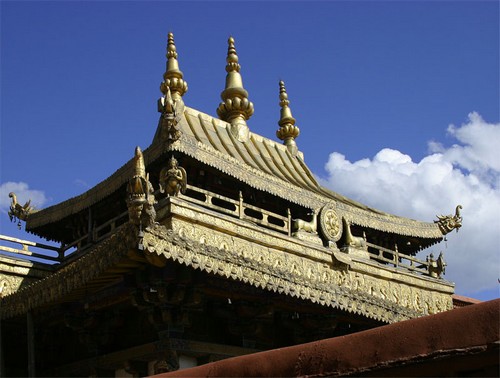 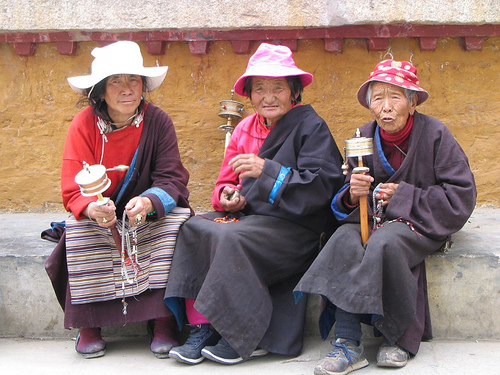 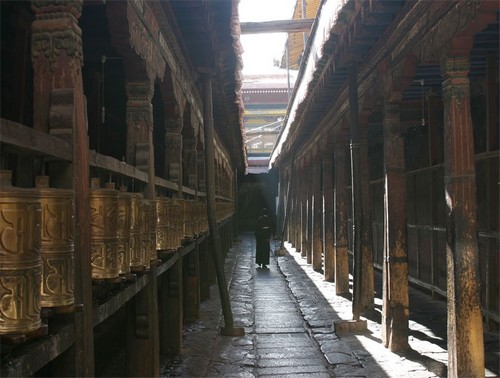 Dzhao Temple is called Yikezhao (伊克召) in Mongolian which means a large temple. The original name of temple is Hongci Temple (弘慈寺), which had been changed to be Wuliang Temple (无量寺) in Qing Dynasty (1644-1911). Because the statue of Sakyamuni in the temple was made of silver entirely, so Dazhao Temple is also called Silver Buddha Temple (银佛寺) by the locals. Dazhao Temple is the oldest and largest Tibetan-Buddhist temple in Hohhot which has a great influence in Inner Mongolia Autonomous Region. It is situated in the old urban area of Hohhot and located in Front Dazhao Street, Yuquan District, Hohhot City. Due to the impressive buildings, splendid statues, delicate frescos, musical instruments and fine collection of Buddhist scriptures, Dazhao Temple has become a well-known tourist attraction home and abroad. 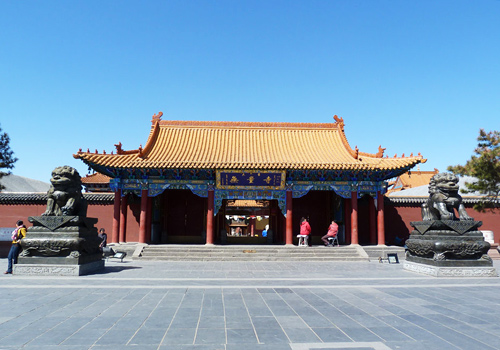 During the period of Emperor Longqing in Ming Dynasty (1368-1644), Aletanhan, a lead of Tumote Mongolia, was conferred as the Shunyi Emperor of the Mongolian. Owing to the special honor, he decided to enlarge Guihua City (归化城), the old city of Hohhot and Hongci Temple. In 1580, the eighth Year of Wanli Period (1573-1620), the temple was completely enlarged, which had become the earliest Buddhist temple in Inner Mongolia Autonomous Region. It went through a large-scale reconstruction in 1640, but much of the original architectural style was retained. Dazhao Temple owns its fame due to the third Tibetan Dalai Lama. In 1586, the third Tibetan Dalai Lama visited Dazhao Temple and took charge of the opening ceremony. As a result, Hongci Temple had become a religious activity center for people in Mongolia. 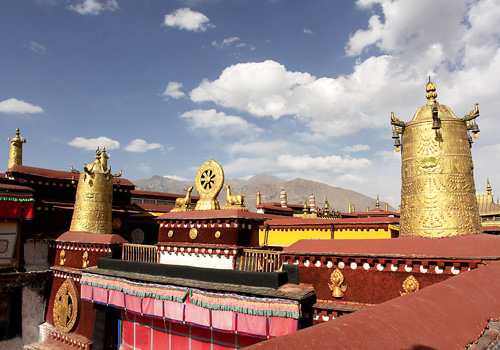 During the rein of Emperor Kangxi (康熙, 1654-1722) of Qing Dynasty in 1700, the temple was rebuilt again. A gold dragon tablet symbolizing "longevity" was set before the silver Sakyamuni and the roof of the architecture was changed into Glazed Tile, which exclusively used for Forbidden City at that time. Since then, Dazhao Temple was improved to be the Imperial Temple. And the name of the temple had changed to be Wuliang Temple. Recently, the temple has experienced some renovations, but there are some halls that retain their original style, especially the well preserved Ming wooden hall that holds the silver Buddha and various murals depicting the emperor's visit.

Covering an area of 30,000 square meters (35,880 square yards) with the construction area of more than 8,000 square meters (9,568 square yards), the main architectures in Dazhao Temple are the main gate, the Heavenly King Palace, the Bodhi Palace, the Sutra Hall and the Buddha Hall. The Sutra Hall and the Buddha Hall are closely connected as one, which are called the Grand Hall. The architectures in the temple are very delicate and mysterious, among which the Grand Hall is built in Han and Tibetan style, while the rest are built in the traditional Chinese style. 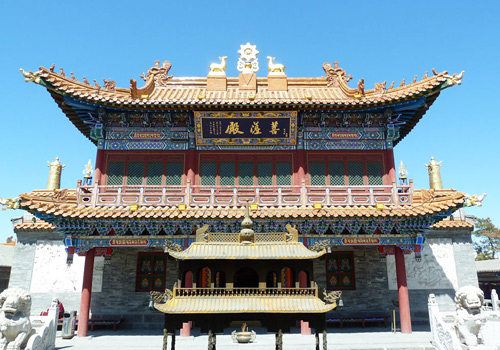 In the center of the Grand Hall, the sliver statue of Sakyamuni, which stands 2.55 meters high, is worshipped and it has a history of about four hundred years. Before the statue there are a couple of gold wooden huge pillars, each engraved with a dragon. In front of the hall there are a couple of powerful hollow iron lions. Besides, there are other buildings in the temple, like passing hall, east and west side halls, the nine-room building and so on. From Ming Dynasty to now, the Dazhao Temple has been a momentous temple acting as an important part of Hohhot and many significant celebrations are also held there.

Many cultural relics are well preserved in the temple, such as the furnace made during the rein of Emperor Xuande (1426-1435) of Ming Dynasty (1368-1644), the dragon-phoenix peacock umbrella used by the Emperor Kangxi, the eight pearl palace lantern placed in the palace of Emperor Kangxi, the gilding God of Wealth gifted by the Emperor Qianlong (1735-1795) and various instruments and masks used in religious activities. The most famous cultural relics are the silver statue of Buddha, the dragon carvings and murals, which are bestowed as “the Three Uniqueness” in Dazhao Temple, and they have very high art value and historical value.

The silver statue of Buddha

The silver statue of Sakyamuni is enshrined in the Grand hall, and it is made of pure silver with 3 meters (9.8 feet) high, with the statues of Tsong-kha-pa (the great reformer and philosopher of religion in medieval Tibet) and Dalai Lama Ⅳ on each side respectively. According to historical records, Dalai Lama III held Buddhist conference for celebrating the establishment of the silver statue of Buddha, which was a very grand event in the history of Tibetan- Buddhism. 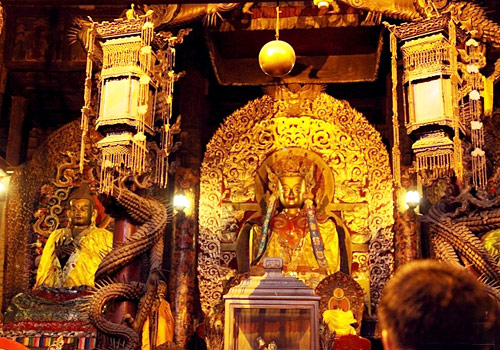 The two golden dragon carvings are carved on the pillars respectively in the front of the silver statue of Buddha, both of which are as high as 10 meters (33 feet), making threatening gestures, and they fully display the exquisite craftsmanship in the Ming Dynasty (1368-1644).

The themes of murals in Dazhao Temple are very rich and colorful, ranging from Buddhist figures to the Heaven and the Hell. There are more than 770 figures in the murals, including immortals and mortals, and the spectacle is very splendid and grand, reflecting the high level in paintings during the Ming Dynasty. The colors of the murals are still kept fresh and colorful. No matter how many years have passed, it will not be changed.