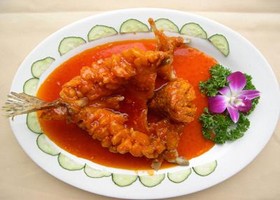 It is said that Hangzhou dishes is like the West Lake that there are as many possibilities as there are people in the world. Hangzhou cuisine belongs to Zhejiang Cuisine- one of the eight Chinese Cuisines, which is featured by refreshing taste and exquisite shape. Hangzhou dishes are made of fresh materials in season with elaborate cooking methods; it pays more attention to nutrition and fresh and tender flavor. Almost a traditional dish is bound to a famous literary quotation. Early in Song Dynasty (970-1279), the great poet Su Shi (1037-1101) had praised the banquets in Hangzhou in his poems and had once got down from his horse because of the inviting smells. And one of the traditional famous dishes of Hangzhou, Dongpo Pork was named after his name (Su Shi is known to Chinese as Su Dongpo).