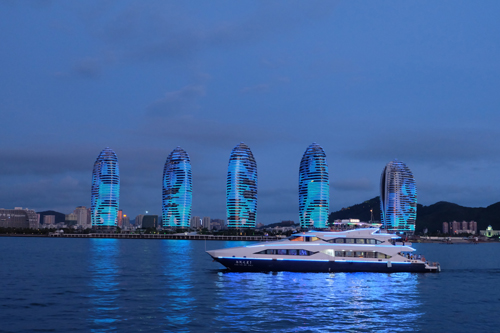 2. Public bus
The destination of No.21 and No.41 bus is Meilan International Airport. The price is CNY 5/person.

3. Taxi
It will take about CNY 60 form downtown area to Meilan International Airport.

By Sea
Haikou is located on the coastline, so there are many ports along the coast. The main ports are Xiuying Port and New Port (Xingang). There are 40 or so boats heading for coastal cities such as Guangzhou, Shangtou, Beihai, Zhanjiang and Hong Kong every day.

By Taxi
Just like other cities, taxi is the most convenient way to travel around Haikou. Taxis are easily hired almost everywhere in the city. Most of the taxis in Haikou are Mazda, Jetta and shally. The flag-fall price is 10 Yuan. It is customary to bargain with the driver before you get on instead of using the meter.

By Bus
There are more than 40 lines of buses in Haikou City. The price is 1-2 Yuan, and most of the buses are self - service ticketing buses. The passengers need to prepare charge themselves. Most of the running hours of the buses are from 6:00 to 23:00.

Buses connect Haikou to many cities on the mainland of China, including Shenzhen, Guangzhou, Hong Kong, and Nanning.

There is also a special line from Haikou to Sanya in Haikou South Bus Station.

Tips: The bus ticket to Sanya can also be purchased at the East Coach Station and the West Coach Station. After getting the tickets, these two stations also supply free buses for passengers to get to the South Coach Station.