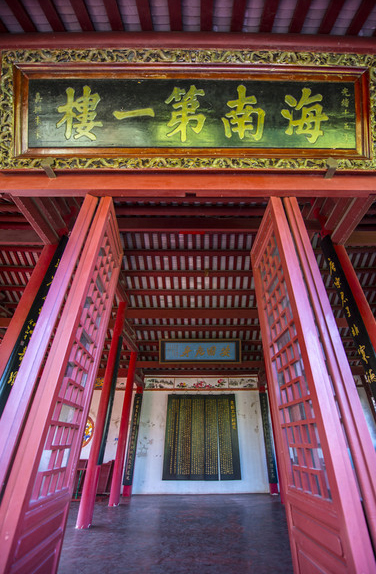 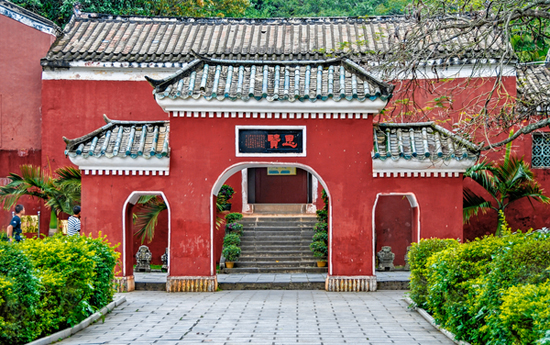 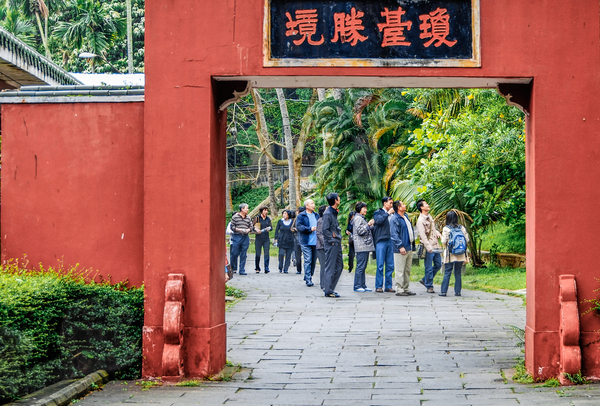 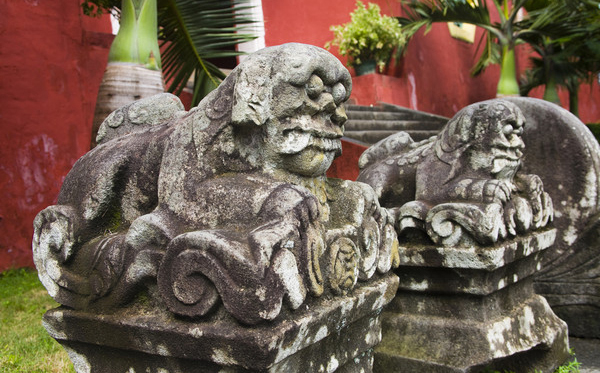 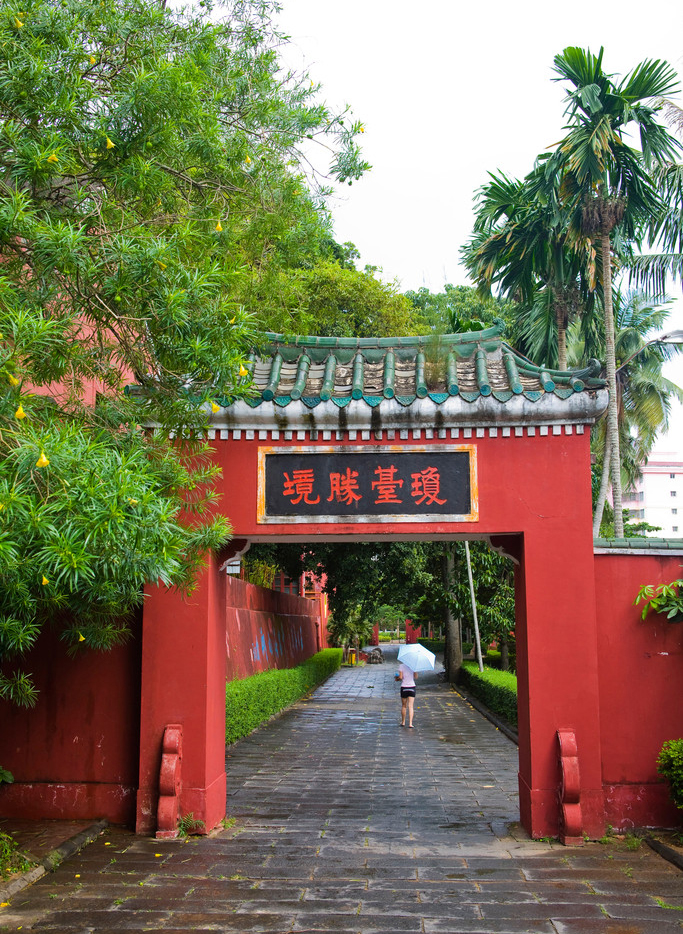 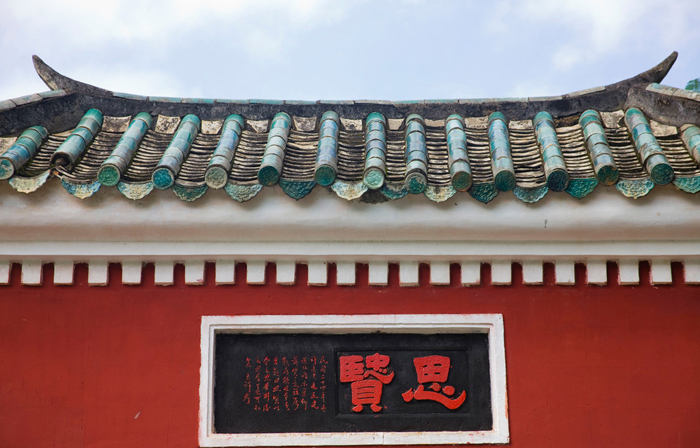 Introduction to Temple of Five Lords
Wu Gong Ci, or the Temple of Five Lords, located at the southeast of Haikou City, covering an area of about 66,000 square meters, is a comprehensive tourist scenic spot integrated with ancient buildings, historical sites and gardens. It was originally constructed during the reign of Emperor Wanli in the Ming Dynasty (1368-1644) and was renovated on several occasions during the Qing Dynasty (1644-1911). Now, it is a place known for its sense of peace, tranquility and beauty.

After many years of renovation and development, the existing Temple of Five Lords are now an attractive ancient architectural complex that mainly include the Five Lords Ancestral Hall, the Sugong Memorial Temple, Hairui and Fubo memorial temples, Guanjia Tang (Watching Crop Hall) and Xuepu Tang (Studying Hall). They cover an area of about 2,800 square meters (about 0.69 acres). 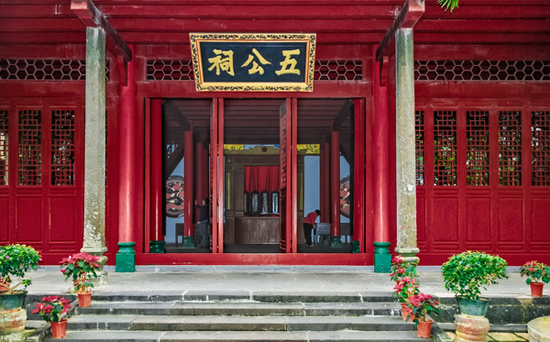 History and construction of Temple of Five Lords
In 1889, the local official of Qing Dynasty constructed the First Temple of Hainan as a memorial to the Five Lords, hence the name of The Five-Lord Temple. Actually it refers to the main building of the First Temple of Hainan and a group of ancient Chinese buildings around it. The main hall houses the vivid and lifelike stone statues of the five prestigious officials. On the inner pillars, there are two much praised couplets which visitors, having learnt about the background of the five officials, cannot help but admire. Additionally, a stone tablet that is carved with calligraphy inscriptions of Emperor Huizong, from the Song Dynasty, is also displayed in the temple.

The Five Lords Ancestral Hall is the main part of this building complex and is considered to be "the No.1 Building in Hainan" even though it is only a two-storied wooden building. This was constructed to commemorate the five famous officials- Li Deyu, Li Gang, Zhao Ding, Li Guang and Hu Quan who were banished to Hainan during the Tang Dynasty (618-907) and the Song Dynasty (960-1279). The main hall houses the vivid and lifelike stone statues of the five prestigious officials. On the inner pillars, there are two much praised couplets which visitors, having learnt about the background of the five officials, cannot help but admire. Additionally, a stone tablet that is carved with calligraphy inscriptions of Emperor Huizong, from the Song Dynasty, is also displayed in the temple.

The Sugong Temple, located in the east of Temple of Five Lords, is another fascinating destination. Su Dongpo was one of the greatest poets of the Song Dynasty. He dug two springs for the locals when he heard that they were finding it difficult to get water supplies. Hence the local people constructed a temple to commemorate his contribution to their community. One of the springs still exists even to this day. 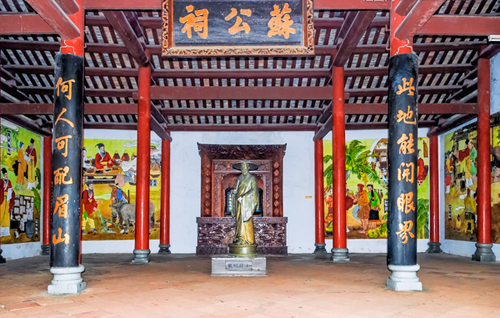 On the right of the Temple of Five Lords, there is a peaceful yard where fresh flowers and thriving trees are planted. There are two main buildings here. One, the Xuepu Tang (literally Gardening Study Hall), is the old site where the famous scholar Guo Wanxiang often gave lectures. The other is Wu Gong Jingshe (West Hall), which is where the students of the Hainan Province, (at the end of the Qing Dynasty) learned historical works and poems.

Five officials
'The Five Lords' refer to the five famous officials in the Tang and Song Dynasties who were suppressed and sent into exile on Hainan. They are Li Deyu, prime minister of the Tang Dynasty, Li Gang, prime ministers of the Song Dynasty, Li Guang and Hu Quan, the great scholars of the Song Dynasty. Although the periods of time the Five Lords lived on the island were not the same, they were all best-known as being patriotic officials and national heroes, and were deeply remembered by the people of Hainan for their propagation of advanced culture of Central China and their influence on the development of Hainan's civilization.

Li Deyu (787-850)
Li Deyu (李德裕) served as chancellor during the Tang Dynasty. He was the leader and namesake of the Li faction during the Niu-Li Factional Struggles that pitted officials of humble and aristocratic origins against each other. Tang Emperor Xuanzong ended the struggles by handing complete defeat to the Li faction, demoting Li Deyu and sending him to exile in Hainan, where he held the position of census officer at Yai Prefecture (modern Haikou) and remained until his death.

Li Gang (1083-1140)
Li Gang (李纲) was a government official who held the office of chancellor for a brief period (75 days) during final days of the Northern Song Dynasty. He was put in charge of the defense against the invading Jin dynasty by the young Emperor Qinzong during the Jin-Song wars, but was removed from his post when the emperor was falsely hoping to enter peace negotiations with the Jin. The Northern Song Dynasty fell in 1127 and Emperor Qinzong became a prisoner of the Jin dynasty for the rest of his life. Li Gang was released from exile and rehabilitated in 1129 and held various government offices in the Southern Song Dynasty.

Zhao Ding (1085-1147)
Zhao Ding (赵鼎) was a statesman and renowned poet of the Southern Song Dynasty. He advocated attempts to recover territory lost to the Jin dynasty and committed suicide dying as a result of a hunger strike.