Guiyang is the capital city of the Province of Guizhou situated in central southwest China. This city is located near to the Yunnan-Guizhou Plateau and the Nanming River, which is known as a headstream of the Wu River joining the Yangtze River in the nearby Sichuan Province. This central city enjoys a humid subtropical climate and was renowned in ancient times as a place highly surrounded by bamboo groves, producing musical instruments. Cool and humid, the city of Guiyang is for many Chinese people known as the place where summer spends smoothly, but is still unfamiliar to the huge horde of tourist. Like many other Chinese cities, Guiyang flourishes with a lot of ethnic minorities among which the Miao, Dong, Hui and Buyi are the most important ones. This is thanks to these unique folklores that the city is renowned for its ethnic minority culture as well as its lush natural sceneries today. While coming to Guiyang on your tour, you will have the opportunity to enjoy many scenic sites barely seen anywhere else in China. Between minorities' festivals, scenic spots and luxurious hot spicy food, Guiyang is just the place where to stop for an unusual tour in China.

History of Guiyang – An important home of ethnic minorities 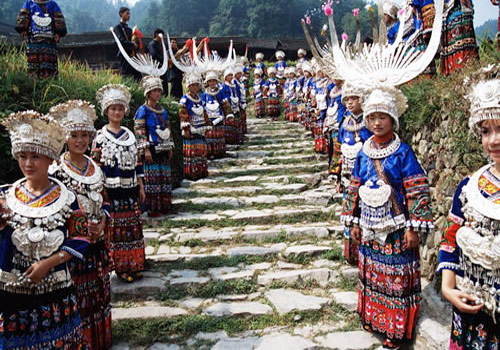 Concerning the city's history, this is assured that the city, originally called "Shunyuan" (literally meaning "obeying the Yuan"), was built in 1283 AD during the Yuan Dynasty. Place of many ethnic minorities since ancient times, Chinese people just settled in the area starting by the Ming (1368 AD - 1644 AD) and the Qing (1644 AD - 1911 AD) Dynasties. Since then, many cultural and historical relics have been left in the city like the Jiaxiu Tower built in 1598, known as the city's symbol today. Unusual place in China, Guiyang is also the only one where seeing the typical architecture of the Wooden and the Wenchang Tower. On top of being one of southwest China's city tourist highlight, Guiyang is also economically known as a commercial and transportation hub of the Province of Guizhou. The city will just let travelers discover one of the least touristy cities of the area but what a city! A mingle of ethnic cultural relics, history and virgin natural scenic sites.

Guiyang nowadays – A hiking place near to Sichuan and Guangxi provinces 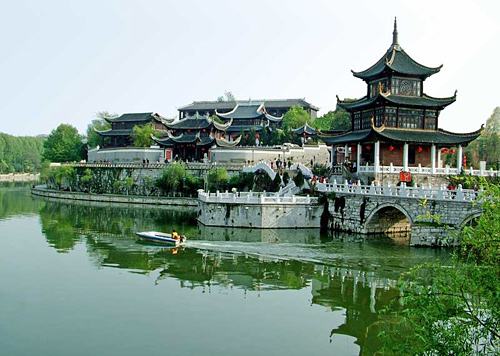 Located nearby the gorgeous southern provinces of Guangxi and Sichuan, the Guizhou Province is a place of tremendous interest concerning its geographical features made of karst mountains. Its natural resources are of an unsuspected beauty, composed of caves, waterfalls, lakes and lush parks. While touring to Guiyang, a walk in the Ancient Qingyan Town is impossible to miss, like the ethnic minorities' festivals, embroideries and masks, etc... The rich food diversity is also a highlight to the city. While in Guiyang, take some time to discover the variety of dishes offered by the restaurants. Of Qian cuisine inspiration, Guiyang's food is made of numb condiment and spicy peppers: Sour Soup Fish, Chang Wang Noodles, Lian'ai Doufu Guo, Maotai wine... everything will just delight your taste buds. A stop-off to Guiyang will be the occasion for every traveler to enjoy one of the best ethnic minority city of China!