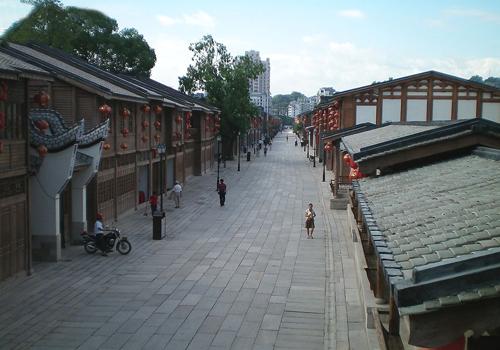 Fuzhou Airport, which is located in Changle County, about 55 kilometers southeast to the downtown Fuzhou, came into service since 1997. It is an air-hub in the southeast China with flights to 40 mainland cities, including most popular tourist cities like Beijing, Shanghai, Xi'an, Guilin, Hangzhou, Guiyang, Haikou, Kunming, Guangzhou, Nanjing, Chengdu, etc. There are also flights to Hong Kong, Macao, Taiwan, and international flights to Singapore, Kuala Lumpur, Tokyo, Osaka and Seoul.

Frequent shuttle buses depart from the airport to Apollo Hotel in the downtown every 30 minutes from 05:30 to 20:30; shuttle buses to Fuqing District about every hour from 06:15 to 21:30; six shuttle buses also runs to South Train Station of Fuzhou every day and depart time is depending on the passengers' demands. All the prices of these bus tickets are 20 yuan. Taxis are also available at the airport, and the cost ranges from 100 to 150 yuan.

As a coastal city in Fujian Province, Fuzhou harbor is the largest water transportation terminal junction in the area. Its ships connect the main harbors along Yangtze River as well as more than 30 harbors in more than 20 countries and regions in the world.

Fuzhou train station is located near the North Second Ring Road, in the north of Fuzhou City. There are daily service to 18 important provincial capitals and more than 10 major cities in the country like Suzhou, Wuxi, Shenzhen, Luoyang, Qingdao, Ningbo, etc. Motor train units also run to Wenzhou and Xiamen.

There are three bus stations in Fuzhou, namely, north station near the train station, south station on Wuyi Road, and the west station near Hongshan Bridge. About 300 coaches run to cities of Beijing, Guangzhou, Shenzhen, Wenzhou, Changsha, Guilin, Xi'an, Nanjing, Zhengzhou, Nanchang, Hong Kong, etc, and to over 30 towns and villages surrounding the city in Fujian Province.

The public transport in Fuzhou is convenient. About 200 daily bus lines run from 06:00 to 22:00 in the city, and taxis are also available. Subways in Fuzhou are under construction, of which the No. 1 line is planned to work in 2014, it no doubt will be more convenient for travelers with subways in the near future.