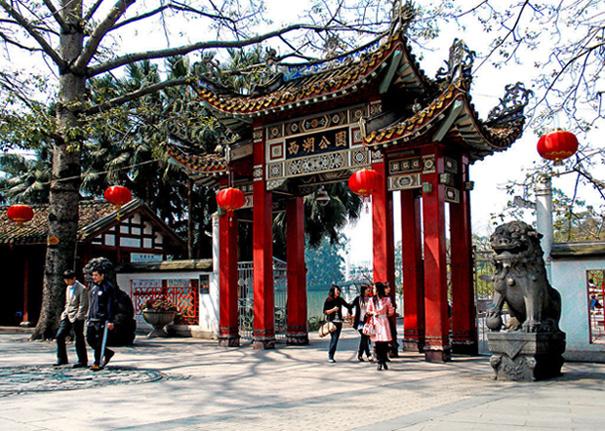 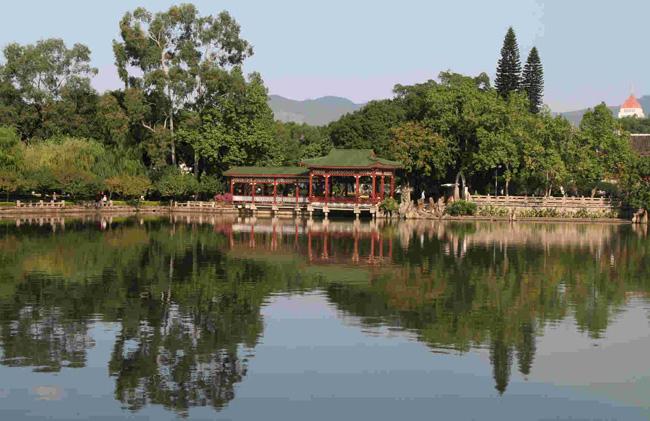 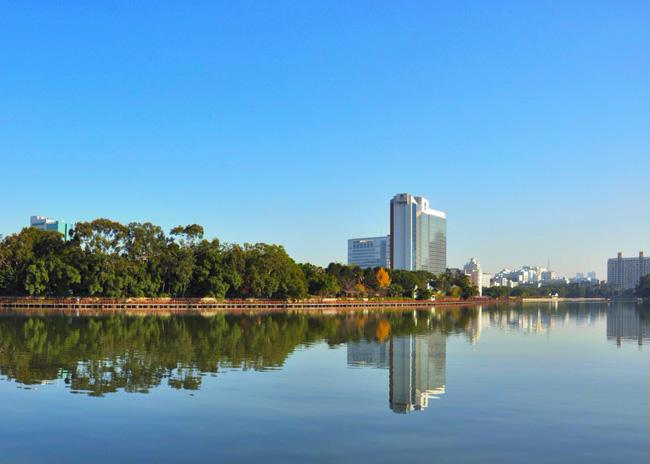 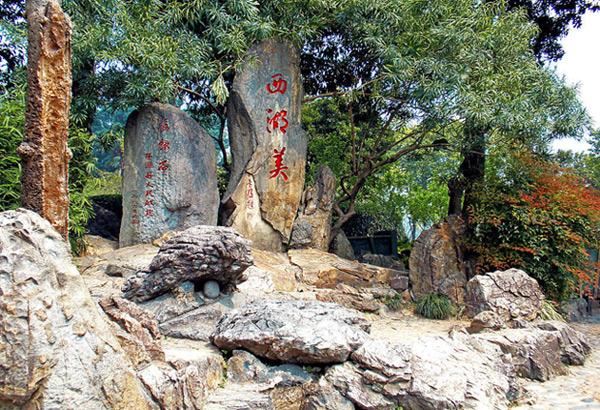 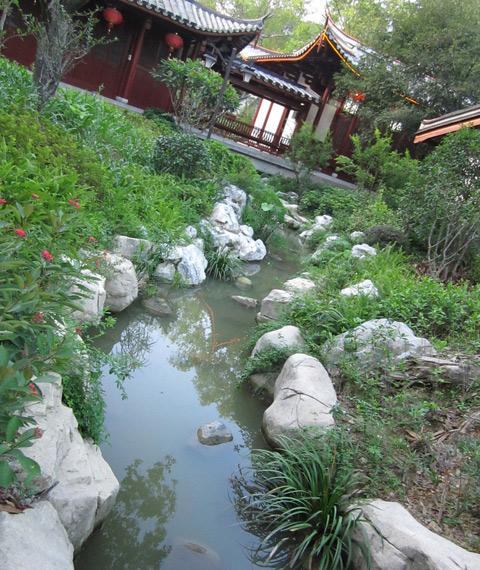 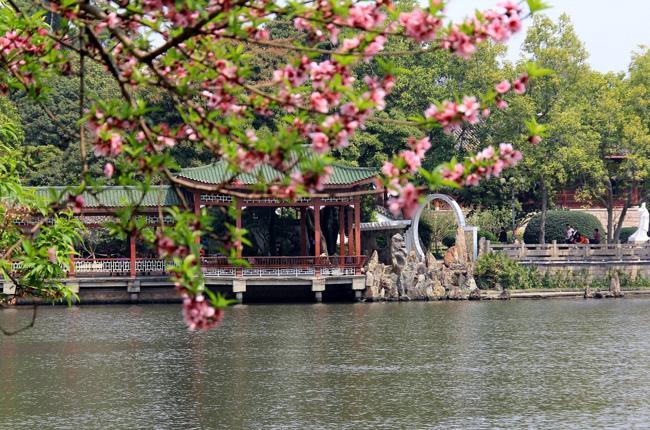 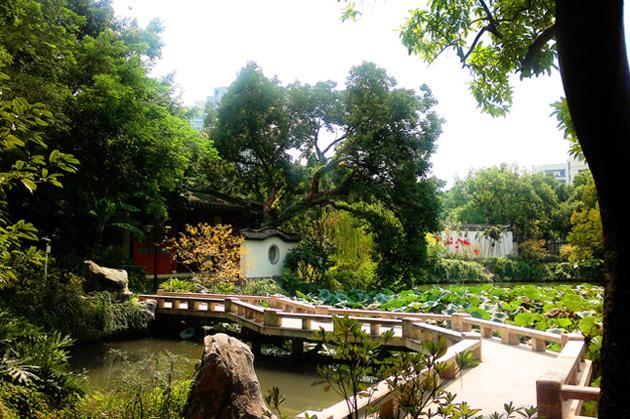 A well-preserved classical garden in Fuzhou with long history

Covering an area of 42.51 hectares, 30.3 hectares of which are water area, the West Lake Park is the most well-preserved and intact classical garden in Fuzhou, which is also regarded as "a bright pearl of Fuzhou gardens". With its graceful natural landscape, West Lake is tranquil and beautiful attracting many men of letters and painters in past dynasties who had left plentiful praising sentences and paintings, of which the famous poet Xin Qiji of Song Dynasty (979-1279) once compared the lake with unmarried Xi Shi, one of the four beauties in ancient China. 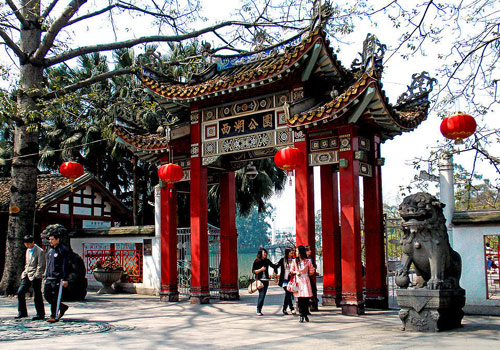 Built in 282 of Jin Dynasty with a history of over 1700 years, West Lake has yet a hot tourist attraction in late Tang Dynasty (618-907). In the Five Dynasties (907-979), Emperor of Min State (present Fujian Province) built pavilions, terraces and buildings around the lake and made it an imperial garden. In Qing Dynasty (1638-1911), the official Lin Zexu recovered the park by laying stones on lakeshores, and in 1914, it was officially opened as West Lake Park.

What to see in West Lake Park?

Willow Bank (Chinese:仙桥柳色)- as the first view after entering the park, Willow Bank was originally built in 1930. With a width of 18 meters and a length of 139 meters, a number of willows, peach trees and flowering shrubs are planted along the lake bank make it a pleasant place in spring. 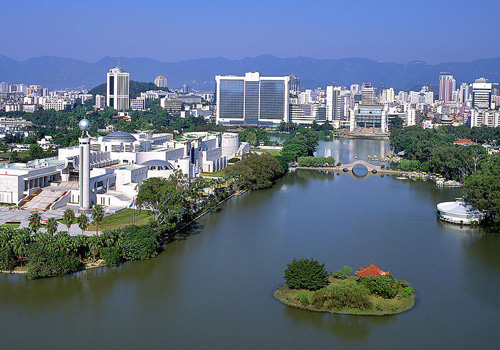 Kaihua Island (Chinese:开化屿)- it is the central part in the park. A Yaoqiao Island is in its north after crossing a Jade Bridge, in which area there are Provincial Museum, Art Gallery, and West Park Theater. Xieping Island is in the west of Kaihua Island with rich playing equipments for children.

Crape Myrtle Hall (Chinese:紫薇厅)- originally built in 1914, it gets its name from the surrounded crape myrtle trees. Now, it is the service center of the park.

Kaihua Temple (Chinese:开化寺)- located in the center of Kaihua Island, it is the oldest building in the park which was originally built in 1037 in Northern Song Dynasty (960-1127) and rebuilt in Ming Dynasty during the period from 1522 to 1566. The buildings today were rebuilt again in Qing Dynasty in 1705. The temple is famed for a Leechee tree of the variety of 18th daughter. Colorful precious flowers and trees, miniascapes and root carvings decorate the temple. 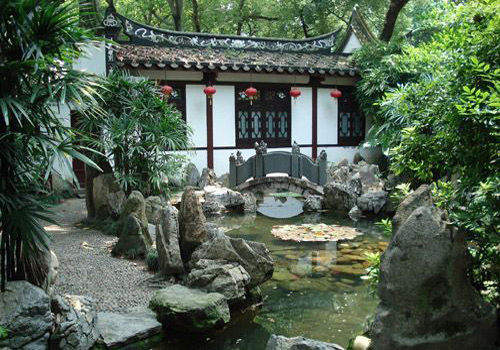 Wanzai Hall (Chinese:宛在堂)- it is a memorial hall for poets in the east of Kaihua Island. Built by a poet during the period of reign of Zhengde in Ming Dynasty (1506-1521), it was a gathering hall for poets in Ming and Qing dynasties. Today, in beautiful seasons of spring and autumn, men of letters also get together here to exchange with each other.

Gengyi Pavilion (Chinese:更衣亭)- it is one of the typical eight scenes in ancient time. Built on the bank of the lake and faces three sides of water and lotus, it enjoys a vast vision to appreciate the beauty of the lake accompanied by gentle breeze and fragrant of lotus. The present square pavilion was built in Qing Dynasty.

Gui Hall (Chinese:桂斋)- it is originally an ancestor hall for Li Gang and built by Lin Zexu in Qing Dynasty. It gets its name from its beside two osmanthus tree (gui in Chinese). Later, it was changed to be a Reading House of Lin Zexu in 1905.

A Walking Way around the Lake

A walking way is built around the lake for convenience to visit all the scenic spots in the park, and about six main entrances and some other small convenient entrances are set up along the way that is quite considerate for visitors to enter the park wherever they wish.

The square is located in the northeast corner of the park and near the West Lake restaurant. It is a superexcellent site to enjoy the beauty of West Lake with a panoramic view. The square is also a recreational place for citizens to do body building or organize kinds of activities like playing chess and cards, singing and dancing. It is lively and abustle both in the early morning and the night. 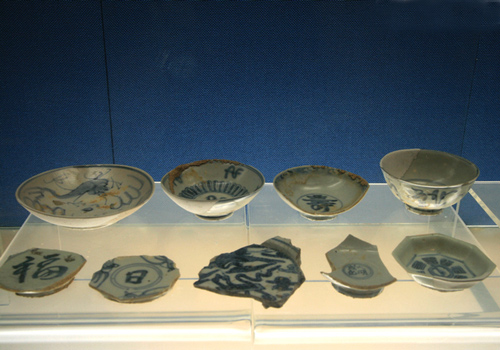 Located on the bank of the West Lake, Fujian Museum is the largest Cultural infrastructure in the province. The building is shaped according to the featured Fujian dwellings and decorated in the style of ocean. It is a provincial comprehensive museum combining the history, cultural relics, archaeology and natural specimen, as well as a cultural relics' center in collecting, education and research. The number of relics and specimens in the museum is nearly 200 000, over 6000 of which are the national precious. At present, there are 15 exhibition halls with a total area of 12000 square meters for regular exhibitions.

It is an academy built in 1873 in Qing Dynasty to cultivate talents for the country. And many excellent modern researchers were once studied here, such as Huang Zeng, a Confucian classics and literature researcher, and Zhang Hengjia, a history researcher who was also the first supervisor of the former of Peking University. West Lake Academy was changed to be a teacher-training school (the former of present Fujian Normal University) in 1905 after the abolishing of the traditional imperial exams.