A remote county at the edge of Hunan Province and next to Guizhou Province, Fenghuang County, or rather Phoenix Town, is arguably the most picturesque town in China. Located in the Xiangxi Tujia and Miao Minorities Autonomous Region, it covers an area of 1700 square kilometers with a population of 37,000. Most of its population is made up of Miao people and Tujia people. Mapped with green ravines, it is nestled among 47 peaks. Fenghuang presents the world the appearance of an ancient town. It has a main street and amounts of stone alleyways  snake  between  houses that are built on stilts. The Tuojiang River, the Mother River of Fenghuang County, has incredible beauty with wooden houses casting reflections on the water and boatmen paddling their rafts. Its bustling market lies in the main street with arrays of specialty shops selling local products such as silverware, handmade items, batik textiles. But Fenghuang Ancient Town offers far more than natural beauty. With a history of over 300 years, it is crammed with historical sites. The Southern Great Wall in Fenghuang was built in Ming Dynasty (1644-1911) for the purpose of defend against the revolt of Miao Ethnic Group. Moreover, Fenghuang is home to a multitude of talents, including generals, leaders, writers, artists and calligraphist. The famous writer Shen Congwen, artist Huang Yongyu, famous politician and educator Xiong Xiling, who portrayed the Phoenix Town in their masterpieces, leads this unsung small town known to China and even the world. 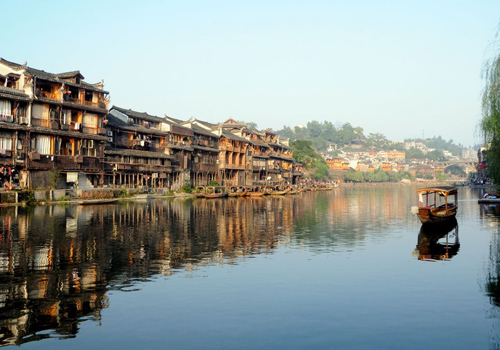 Fenghuang was regarded as a ''barbarian'' land in the past. Miao people and Tujia people have been clustered here for generations. But today the minority ethnic people live harmoniously with local Han people. Founded in 1704, it has a history of more than 300 years. The ancient East Gate Tower and North Gate, which were built with red sandstones for military defense and flood-preventing, still stand as hard as rock. The landmark Hongqiao Wind and Rain Bridge is a time-honored bridge worn down inch by inch, seeing the change of the town. Phoenix Town became a county in 1913. In 2001, it was placed on the list of National Historic and Cultural Cities. 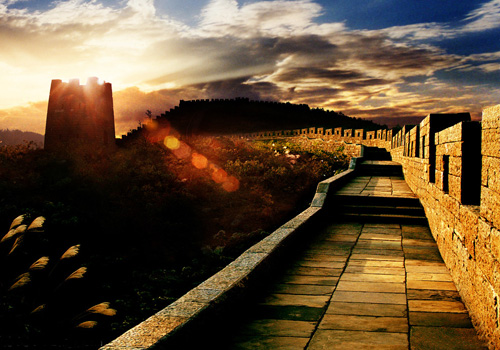 It remained untouched for centuries. But the world is changing; Feng Huang Cheng is not immune. The Border Town written by Shen Congwen depicts this town as lovely as poetry, bringing this silent town to the world. Tourism powers this town’s phenomenal growth rate. Travelers come here for old village atmosphere, Tuojiang River, Southern Great Wall, or out of admiration for Shen Congwen or Huang Yongyu. Stone lanes, riverside wooden houses, Wanshou Palace, Chaoyang Palaces, Ancestor Hall of Yang Family, residences of Shen Congwen and Xiong Xiling, etc, all these show a distinctive ancient town. The most delightful thing to do in the Phoenix Town is to  find a place to soak it all in.