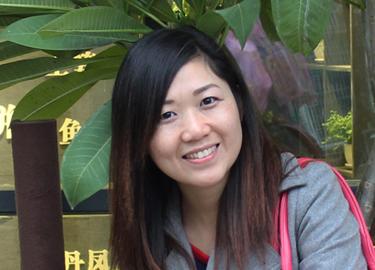 Dear all,
How are you doing?  I'm having a wonderful summer so far!  I came back from China last week, and I'm volunteering at my parish's bible camp this week =)
In China we visited Beijing, Xi'An, Guilin, and the Yangtze River.  I didn't really like the plane ride there, but I was excited to be in China!  That was my first time going there, and I've always wanted to go.  At the airport, we had to go through swine flu temperature scans five times!  The quarantine even came to our hotel rooms to measure our temperature!
In Beijing on the first day, we visited the Ming Tombs and the Great Wall.  What I loved about the tombs were the statues of animals "guarding" them.  There were 4 of each animal, 2 were standing, 2 were sitting.  I took pictures of all of them.  XD  There was even a chinese unicorn!  We only walked a small part of the Great Wall, but going up and down all the stairs was tiring. Nevertheless, it was awesome walking on the giant wall that has been standing throughout more than 2000 years of  Chinese history.  Did you know it's one of the seven wonders of the world?  It was pretty amazing.  After hearing so much about the great wall, I finally got to go there.  Also, the view of the great wall stretching across all the mountains and hills that surrounded the wall was spectacular.
In the evening we watched a show at the Laoshe Teahouse.  the show included opera singing, mimicry (they mimicked birds, planes, and trains!  XD), mask changing, kung fu, acrobat (she balanced stuff on her feet, including a bar with a girl on each end and she twirled it around), and magic tricks.  The performances were especially interesting.  We also drank oolong tea and ate snacks like egg rolls, pumpkin seeds, and green tea rice cakes (I loved these.  They also almost looked to cute to eat!  I wish I took a picture of them.  They were small rectangles that were brown in the center, white in the middle, and green on the outside).
The second day we visited the Forbidden City, JingShan Garden, and North Church.  The Forbidden City was gigantic.  It would've taken forever to walk through.  (I was really tired)  I guess it actually is a city.  XD  It was extremely hot that day, but it was cool seeing the palaces and rooms of the Chinese emperors and the others who lived in the forbidden city, including the huge thrones and the curtain where Cixi said comands behind the curtain.  I don't know what I would do if I had lived there.  I would probably get lost.  I've never seen anything like the Forbidden City, and the architecture was extremely good, much better than all the other palaces in the world, I guess.
We hiked to the top of JingShan garden where there was a small Buddhist temple.  You could see almost all of Beijing from up there, and the wind was really strong but refreshing.
What was interesting about North Church was that it had been attacked during the Boxer Rebellion.  There were 2 pictures of Our Lady of China in the church, one dressed with clothing from the Ming Dynasty and one dressed with clothing from the Qing Dynasty.  Next we went to WangFuJing, where there were lots of stores and snack shops, and no cars.  I wish I had gone there a second time, but we didn't have the chance to.  We had Beijing Duck for dinner.  I had it in Toronto before, but the beijing duck in beijing was much more delicious.  We all enjoyed the roast duck.  Just thinking about it makes my mouth water  XD 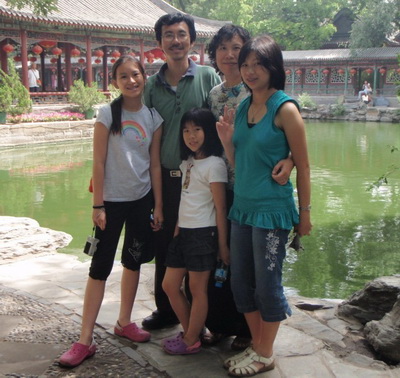 The next day we visited the Summer Palace and the Bird's Nest (we didn't get to go inside it though).  The summer palace was bigger than the forbidden city, I think :O :O :O  The garden was very pretty, with lakes and palaces.  We walked through an endless corridor outside, and there were pictures on the ceiling, including ones of Monkey King.  We rode a boat on the lake.  It would be fun to live here during the summer, even though CiXi was the one who funded it XP.  Our garden here at home is a postage stamp compared to the summer palace. The best part of the day was going to Old Beijing.  We visited But it was lots of fun riding the 3-wheeled cart.  Isabel and I played Sweet and Sour while riding it.  In the game, you wave at people.  Those who wave back are sweet.  Well, there were only 3 sweet people!  The worst part of the day was riding the airplane to Xi'An.  (I don't like riding airplanes)
We spent the first morning in Xi'An seeing the Terra Cotta soldiers, and we also saw the farmer who discovered them.  Even though they have been broken, many of them were repaired.  And the terra cotta soldiers we saw were just some of them!  The whole tomb still hasn't been excavated yet!  I can't imagine how long it took to build the whole tomb.  It's amazing how they survived all these years.  The museum had stunning bronze chariots that were detailed right down to the sliding windows and spinning parasol.  In the afternoon we visited a mosque and bell tower.
We had a Tang Dumpling Feast in a theater.  We got to sit right in the front and eat 18 kinds of dumplings, including mini dumpling soup, spicy dumplings, and duck-shaped dumplings!
Isabel and I got to go biking on the Xi'An City Wall next day!  Next we went to the historical museum and saw a lot of historical artifacts, like pots and tri-colored objects.  Before leaving, we went to the Big Goose Pagoda, which was built in honor of a goose Buddha sent some monks.  We flew to Guilin.  Guilin was my favorite place we visited.  We rode a boat down the LiJiang River to Yangshuo County.  There were lots of interesting rock formations, like Apple Hill, the Painted Cliff with 9 horses, etc.  The river and sloped green mountains were very beautiful, and the boat ride was a lot of fun.  Later we saw other rock formations like the Kissing Penguins, camel, and the moon.  The moon cliff has an arch, and the space under it looks like a moon.  If you drive around it and look at the arch, it will look like the moon's different phases.  I had a lot of fun riding a raft on the river towards the camel rock.  The rock formations in Guilin are breathtaking!  That night we watched a performance of Chinese minority groups (it was also a light show) on the river and boats.  It was cool when their costumes lit up.
On the next day, we visited Elephant Trunk Rock and the Seven Star Park where we saw pandas!  They were so adorable!  That was my first time seeing pandas, even though there were only 2 there.  The best part was going to the Reed  Flute Cave.  The stalactites and stalagmites formed scenes, such as the snowman, christmas tree, crystal palace, mountains and clouds out the window, and a bumper harvest.  Being in the cave felt magical.  I couldn't believe anything like this cave existed on earth.  Well, I also couldn't believe there were more spectacular caves.
We boarded our cruise The Blue Whale in ChongQing.  We stopped at the Fengdu Ghost City (scary, but fun when riding the cable car), White King City (historical), and the dam (boring).  The gorges on the Yangtze River we passed through were very scenic.  At one gorge, there were 3 hazy blue mountains together, one right in front of the other.  You could see the outline of each mountain against the biggest mountain in the back, and it was very beautiful.  It was just sad that because of the dam, many of the beautiful landscapes on the river have been wiped out.  The fashion show on the cruise that presented clothing from China's different dynasties and modern Chinese clothes was very entertaining.
From Yichang we flew to Beijing.  We woke up early the next morning to go to the Heavenly Temple, and the echo wall and giant mound there.  At the Echo Wall you could hear people at the other end of the wall. It was kind of creepy.  The mound was round and there were stone steps leading up to the flat top.  The Heavenly Temple was round and the achitecture was incredible.  A lot of old men and women were doing taichi and dancing at the garden.  Later we went to Fragrant Hills.  It was pretty and there were a lot of temples (we went to one on top of a hill and a large white one), but it was fun when my sisters and I got to hit the bell gong.
Our last day in China we went to Prince Gong's residence, the Confucius Temple, and the Lama Temple.  There were multiple temples of Buddhas, each bigger than the last.  The final one had the biggest Buddha in the world!  There was also a temple with 500 Buddhas!

It was kind of sad leaving China since I had so much fun.  I hope I can go back again.
Tour Details: /tour/easy-going-tours/voc-090608-s.html

(all the tours are flexible to change, feel free to tailor made your tour with us)