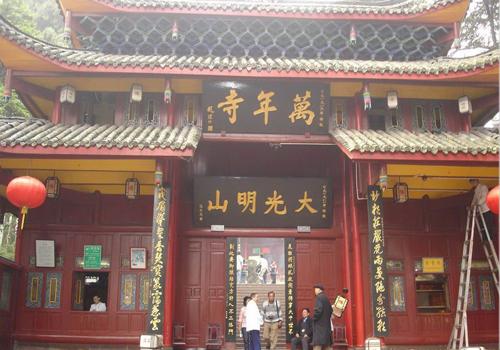 There is no airport in Emeishan City. However, it is about 90 minutes’ drive to Chengdu Shuangliu Airport, which has daily flights to Shanghai, Guangzhou, Beijing, Hong Kong and regular flights to Bangkok, Singapore, Seoul and other cities in Southeast Asia.

There are two bus stations in Emeishan City. One is Jiuzhu Long-distance Bus Station, 6 km from Mount Emei. Another is Tourist Bus Station in the Mount Emei Scenic Area (峨眉山旅游客运中心). Ask the driver what the destination is before you take a bus. Emeishan city is 156 km from Chengdu, 34 km from Leshan City (where the Leshan Giant Buddha is located).

There are shuttle buses (CNY90/105) leaving Chongqing Caiyuanba Bus Station or Chengjiaping Bus Station for Emeishan City at 09:00 and 11:00 daily.

There are three bus routes in Emeishan City.

2. From the First Secondary School of Emeishan City to Emeishan Railway Station (CNY1)

Rickshaws are available in the urban area, which holds one or two passengers. The fare depends on how far you go, usually CNY2 to 5.

The taxi fare is charged by a taximeter and CNY5 within two km. Taxis can only get to Meeting Guests Square (迎宾广场) of Mount Emei Scenic Area, where you can transfer to a sightseeing bus.

Sightseeing bus is the major transportation in Mount Emei Scenic Area. Ticket prices are as following: