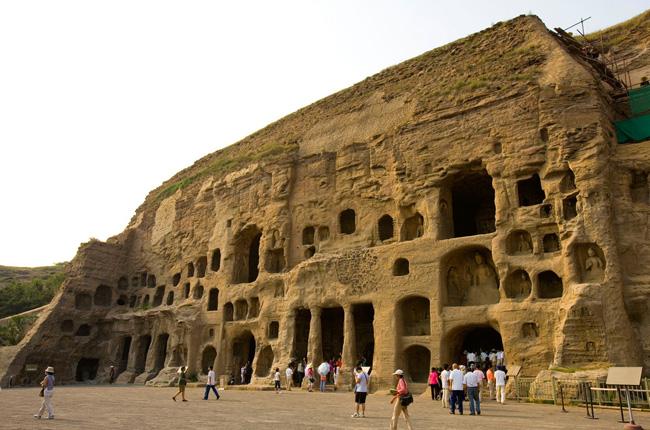 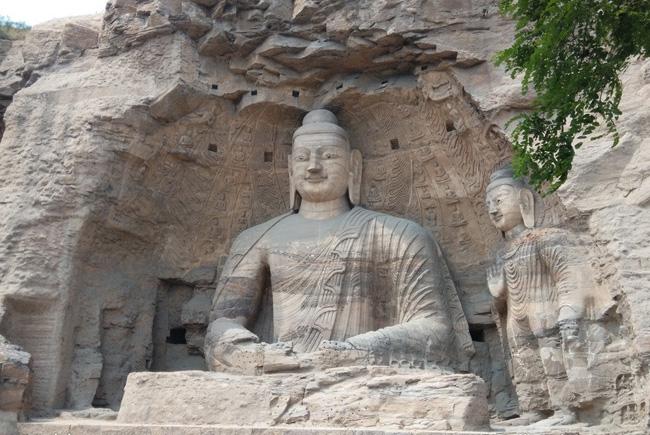 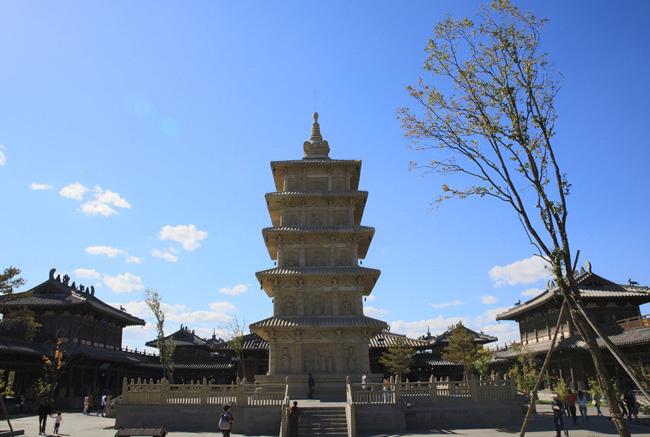 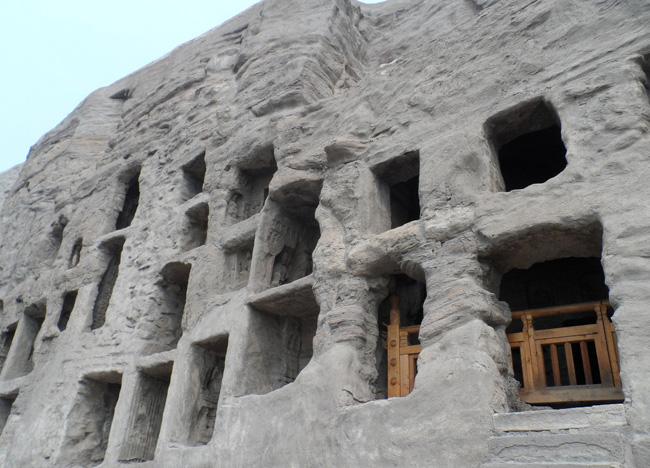 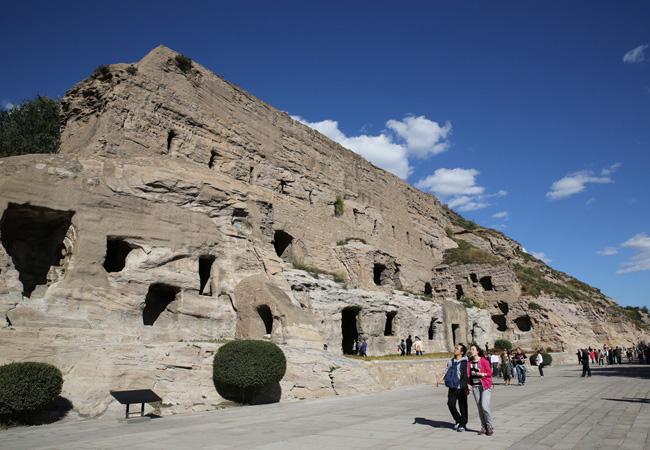 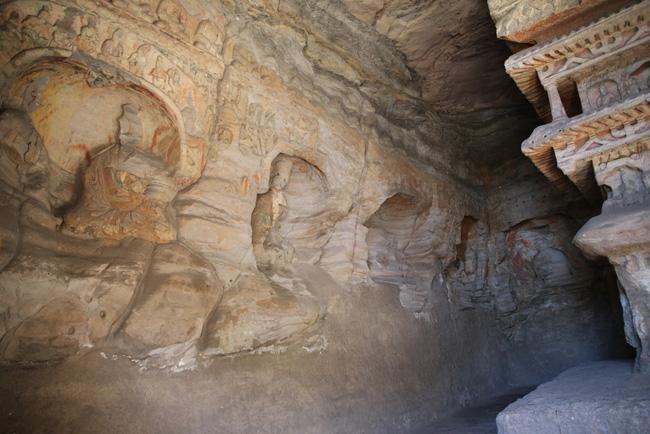 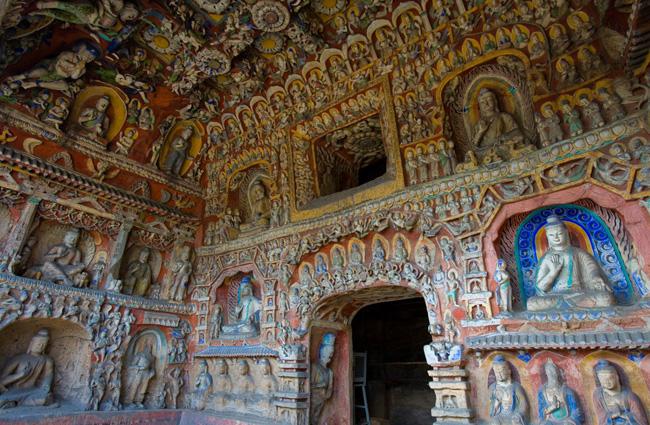 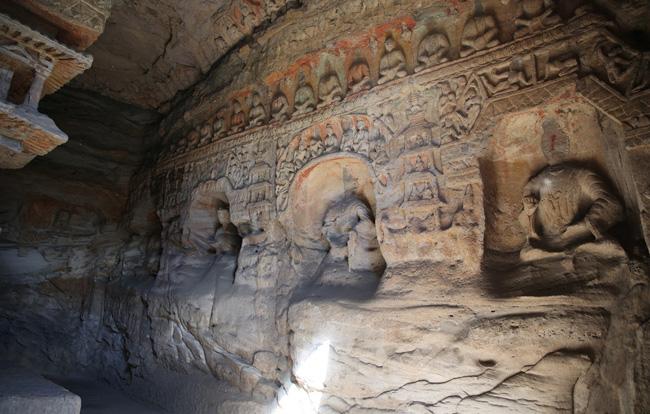 Chinese name: 云冈石窟 (Yungang Shiku) Location: at the south foot of Wuzhou Mountain, 16 kilometers west to Datong City, Shanxi Province. Opening time: 08:30-17:20 (from Apr.15th to Oct.27th), and 08:30-17:00 (from Oct.28th to Apr.14th); opening time will be extended during festivals or holidays accordingly. Ticket: CNY150 best time for visit: May-October How to get to Yungang Grottoes: take buses No.4, 26 or 28 and get off at Xin Kai Li Station (新开里站), and then transfer to bus No.3 and get off at Yun Gang Shi Ku Jing Qu (云冈石窟景区, Yungang Grottoes Scenic Area).

Yungang Grottoes of Datong is deemed as the Three Largest and Most Famous Grottoes Clusters together with Mogao Grottoes of Dunhuang, and Longmen Grottoes of Henan. Located at the southern foot of Wuzhou Mountain, the grotto area was excavated along the mountain, imposingly stretching 1 kilometer with rich contents. Covering over 18,000 square meters engraving area, there are existing 45 main caves, 209 subsidiary caves, more than 1,100 niches, and more than 51,000 stone statues, among which the largest statue measures 17 meters and the smallest only 2 centimeters. One of the largest stone caving art treasury famous both home and abroad, the Yungang Grottoes was inscribed as a key cultural relic under the state protection in 1961, a world heritage site in 2001, and a 5A national Scenic Area in 2007. 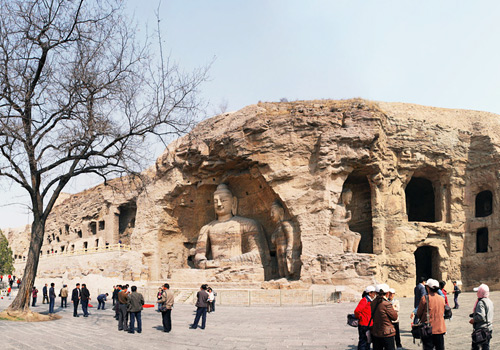 Started in 453 in the Northern Wei Dynasty (368-534, a regime founded by Xianbei natianality), most of the carvings of Yungang Grottoes were completed before 494, while the statue carvings were not finished till 525. The lively and vivid Bodhisattvas and Apsarases and the fine and delicate engravings on pagoda pillars of Yungang Grottoes are outstanding representatives of Buddhism grotto art of China, which had well carried forwarded the realistic essence of Qin and Han style (Qin Dynasty (221BC-207BC), Han Dynasty (202BC-220AD)) and started the new romantic style of Sui and Tang style (Sui Dynasty (581-618), Tang Dynasty (618-907)).

The first Buddhist art treasury created by a single ethnic group during one dynasty after Buddhism introduced to China, Yungang Grottoes is a historic and monumental work of the cultural integration between China and western countries with a history over 1500 years. The exquisite and superb skills and splendid sight of this large scale grottoes cluster today make itself a popular tourist attraction. Some of the statues are carved in high spirit, festively singing and dancing, and some are playing piccolos or pipas with leisure smiles; furthermore, exotic elements are visible from their faces, clothes and accessories. These carvings are just the embodiment of wisdom and diligence of ancient laboring Chinese, the witnesses of friendly communication between China and other countries as well as the development Chinese carving art which had greatly absorbed the essence of Indian Gandhara art and Persia arts.

Features and significance of Yungang Grottoes 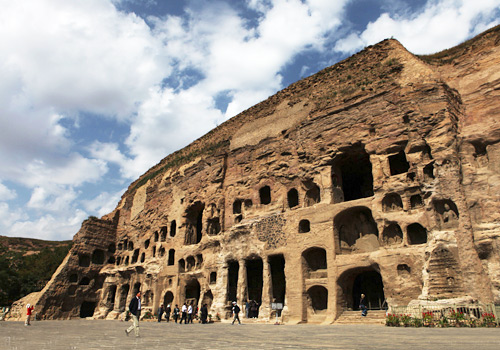 Yungang Grottoes is hailed as a Miracle in Chinese Art with its time-honored history, large scale, rich contents and superb carvings. The whole Yungang Grottoes is grand and dignified with prominent themes, and can be divided into three parts, the eastern, central and western, and the niches are densely distributed like a honeycomb. The eastern part takes pagodas as the principal thing; hence its name pagoda caves. Each of all grottoes in central part can be parted with a front room and back room; each grotto houses a Buddha, and basso-relievo covers cave walls and roofs. In western part, small grottoes and niches are in the majority and were built in later Northern Wei Dynasty.

On the basis of completion time, grottoes in Yungang can be subdivided into early ones, the medium-term and the later period, and each belongs to different styles in statue-shaping. The early grottoes are unsophisticated in the style of Chinese western regions with great momentum; the medium-term grottoes are celebrated with fine skills and magnificent decorations, revealing the complicated, diversified and gorgeous art style; and the later grottoes are generally in small size with moderate proportioned and good-looking figures, which served as the model of North Chinese grottoes. In addition to this, the cravings of singers and dancers, as well as ancient acrobatics in Yungang Grottoes are the reflections of the prevailed Buddhism and the social life at that time. 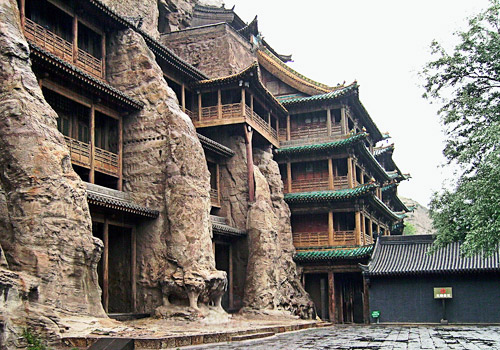 The unique Yungang style skills is the synthesis of developed fine Chinese traditional art with beneficial elements from Gandhara art, which provide precious material for researches in Chinese ancient carvings, architecture, music and religion. Yungang Grottoes is the beginning of Chinese grotto art. Its palace carving style, and the Chinese niches developed from it were widely used in later grottoes, and had influenced the Mogao Grottoes and Longmen Grottoes to different extent.

Fame- As a historical monument built in Northern Wei Dynasty in Datong, Yungang Grottoes is so famous as a world heritage site, a national treasure and a cultural card of Datong City.

Landform- excavated along the Wuzhou Mountain at the southern foot, the grottoes imposingly stretches 1 kilometer and cover over 18,000 square meters engraving area.

Buddhas- A great variety of religious figures such as Buddhas, Bodhisattvas, disciples and Dhammapalas are developed in Yungang Grottoes along with the development of Buddhist arts. 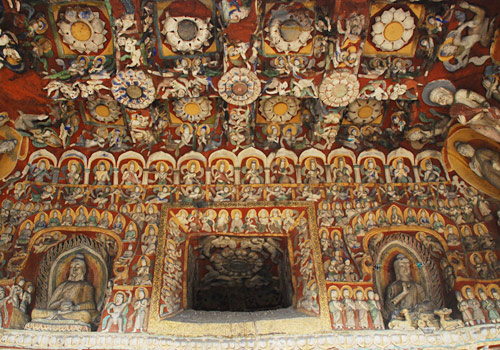 Murals- Murals in Yungang Grottoes is a peerless rolling painting with Buddhist stories. Though they are not the main contents of stone carvings, they are indispensable like other carvings which greatly highlight the themes and beautified the grottoes with added art glories.

Music art- The music and dances carvings of Yungang Grottoes are outcomes of multiculture in ancient China. In these grottoes, there are 22 paintings referring to music art, 27 kinds of musical instruments, over 500 pieces instruments carvings, and over 60 musician groups.

History- Yungang Grottoes reflects the development history of Xianbei nationality, which was a nomadic group originally in the southern prairie of the Yinshan Mountains in central Inner Mongolia. The Xianbei group rose in 386 and founded the Northern Wei Dynasty with the capital in Datong in 398.

Literati & celebrities- For over 1500 years, a great many of men of letters, celebrities, and high officials had left a large amount of masterpieces here, which immensely enriched the cultural implications to Yungang Grottoes.

Couplets- Couplets are the familiar literature form with Chinese, and in Yungang Grottoes, there are a lot of couplets hung on columns of halls, which are important to its fame as world cultural heritage. Among these couplets, there is one inscribed by Emperor Kangxi of Qing Dynasty (1644-1911).