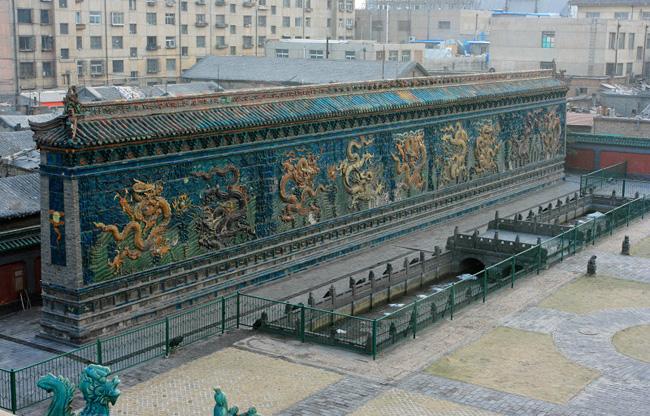 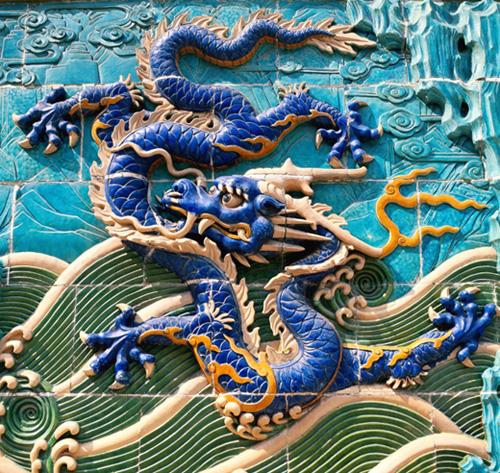 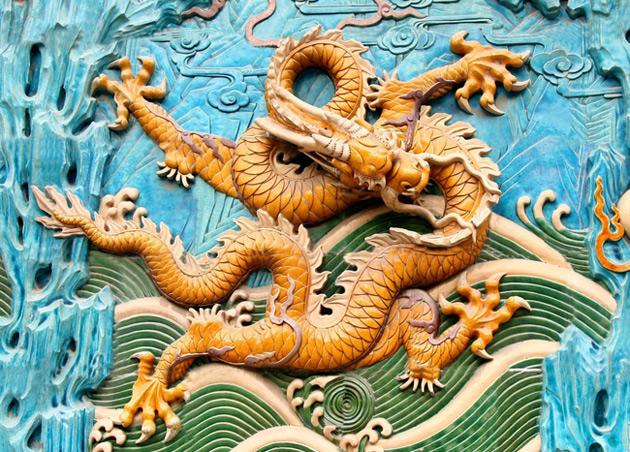 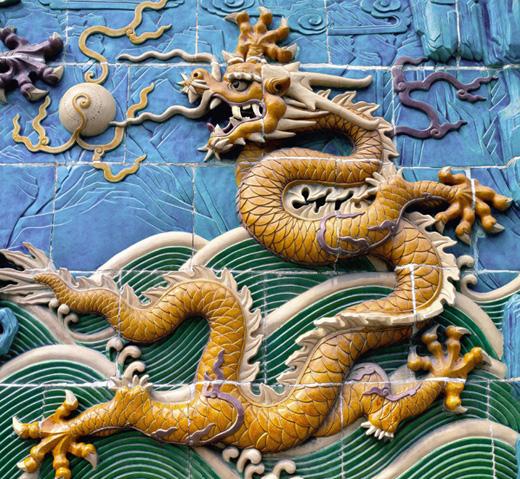 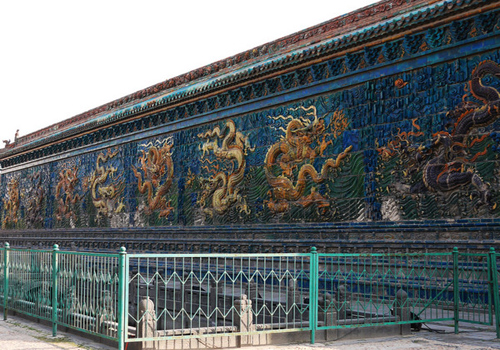 Built over 600 years ago, Datong Nine Dragon Screen has been well preserved and remains intact to this day. It is presently the largest and oldest glazed screen among the four renowned screens in China. The other three are respectively in Confucian Temple of Pingyao County, in Beihai Park and in the Forbidden City of Beijing. It is even about 250 years older and three times larger than that in Beihai Park of Beijing. Datong Nine Dragon Screen is made up of 426 specially-fired colorful glazed bricks, with 8 meters high, 2.02 meters thick and 45.5 meters long. The screen can be divided in to three parts, the pedestal, body and roof.

The pedestal is rectangular shaped with a height of 2.09 meters. It is covered with 41 sets relievos of “two dragons playing with a pearl”. Its narrow middle section is composed of 75 glazed tiles with images of oxen, dogs, deer, sheep, rabbits and other animals. The major part of the Nine Dragon Screen is the body, the design of which is that of green wave on the lower part and a blue-yellow cloud on the upper part. As implied by its name, nine flying dragons are placed properly on the screen with the style of simplicity, stability and dignity. The roof is covered with glazed tiles. 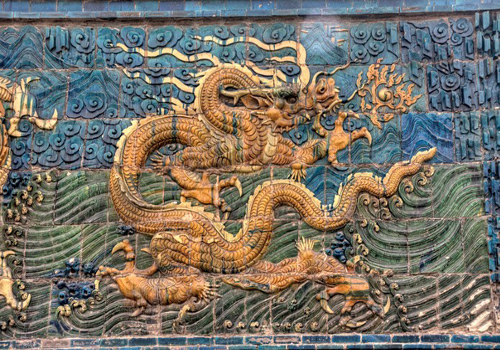 On each side of the screen is covered with the images of the sun and the moon. On the surface of the screen, a golden-scaled, shiny-eye dragon is located in the center, with his head raising forward and tail waving. On each side of it is a pair of light yellow dragons with their heads towards the east and tails pointing towards the central dragon. A second pair of elegant yellow dragons is next with their heads and tails towards the west. The third pair is ferocious-looking purple dragons which seem to be wrestling with the sea. And the fourth pair is highly spirited dragons. These nine dragons are life-like, illustrating their controlling the forces of the nature in Chinese culture. The spaces around and between each dragon is supplemented with images of plants, mountains, stones, water and grass. These patterns along with the nine dragons compliment each other.

The dragon claws on Datong Nine Dragon Screen have only four fingers, which is different from those for emperors in the Forbidden City and Beihai Park of Beijing who have five fingers. It is the difference between the Emperor and other royal families. However, it serves to show the status of Zhu Gui at that time.

Whenever the sun rises, the brilliant sunshine goes though the morning mist and shines on these nine dragons. As the mist dissipates, nine dragons seem to be more gorgeous and glorious. It seems that nine dragons have come to life. They are shaking their bodies, raising heads and wagging tails, as if they have broken through the thick mist and will walk on the surged tides, fly through the clouds and then soar into the higher sky.

There is a pond with a stone bridge located in front of the screen. The reflection of the dragons is dynamic, especially when a breeze disturbs the surface of the water.