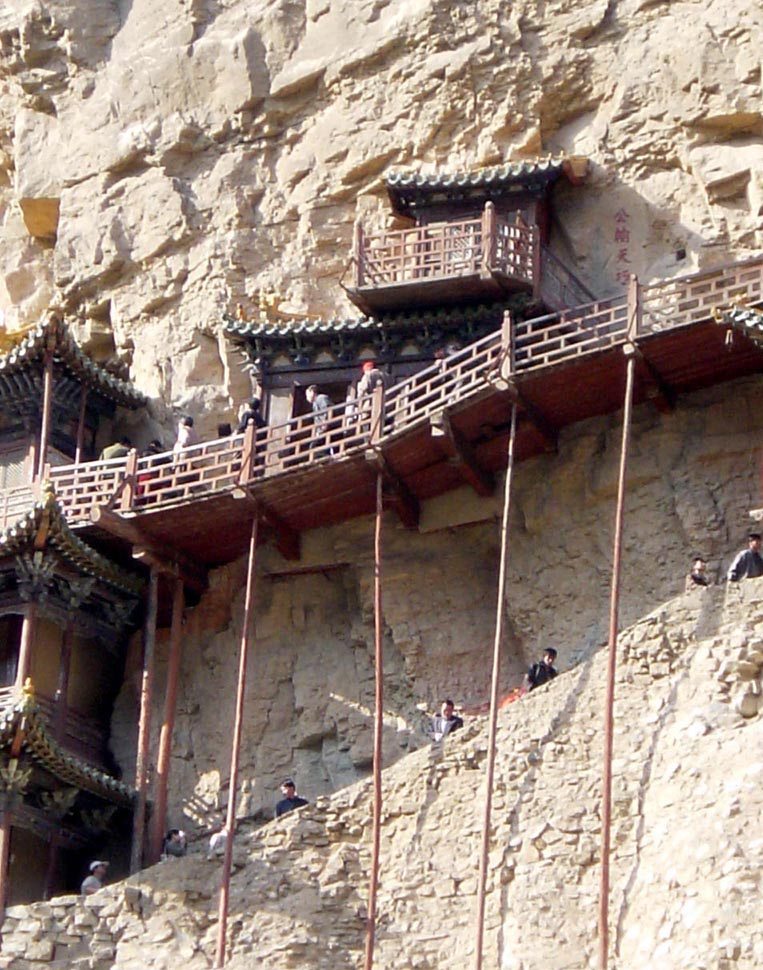 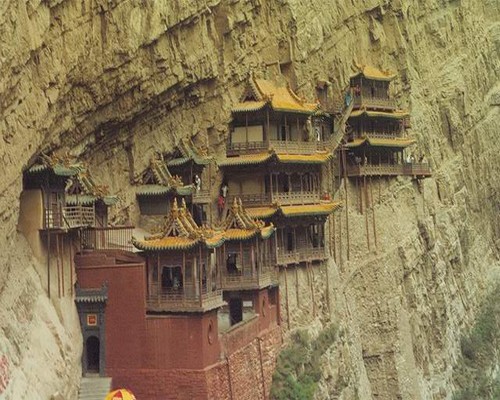 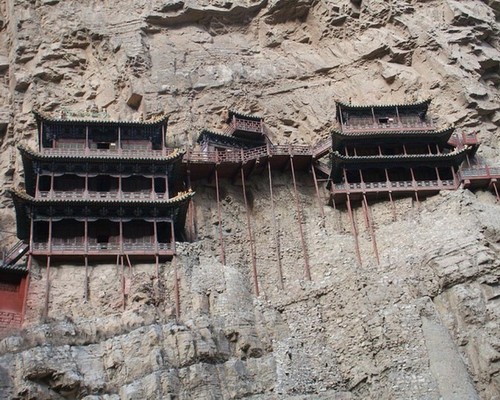 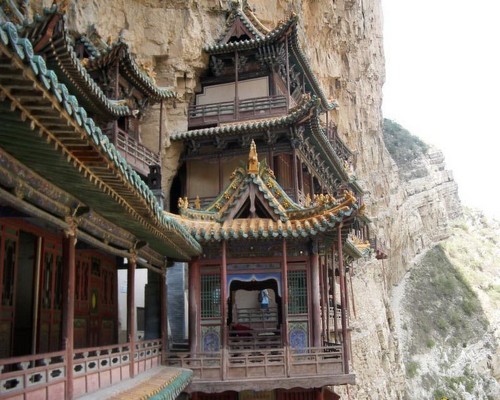 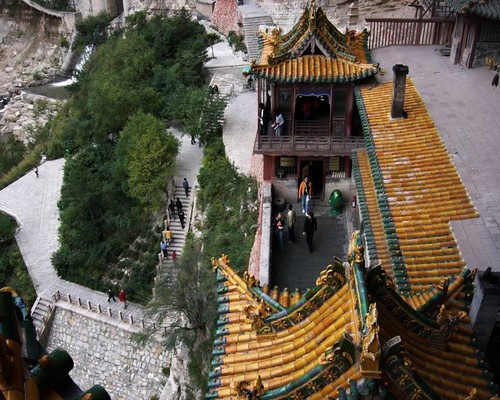 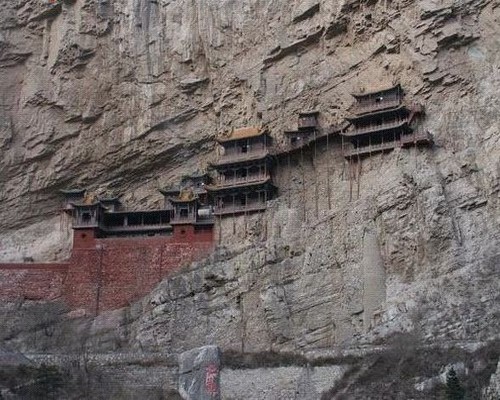 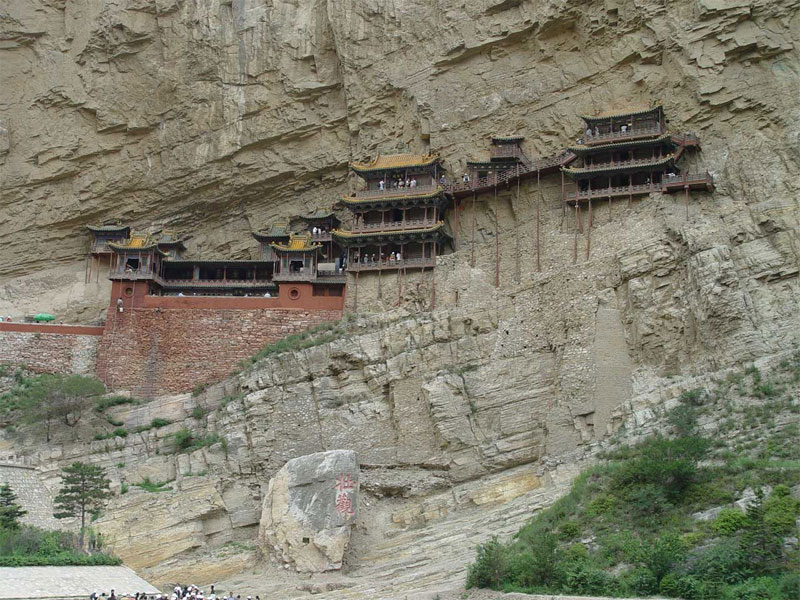 Mt. Hengshan, also named "Yuan Yue" (元岳) or "Chang Shan" (常山), is one of the famous "Five Sacred Mountains of China". Covering an area of more than 62.1 square kilometers, Mt. Hengshan Scenic Spot can be divided into four-grade conservation areas and one natural reserve. The mountain stretches about 150 kilometers from northeast to southwest and the highest peak – Tianfeng Ridge – is about 2016.1 meters high, just second to Mt. Huashan. In 1982, Mt. Hengshan Scenic Spot was officially approved as one of the first national scenic spots of China. Because of the natural scenery and cultural landscapes, Mt. Hengshan has been attracting tourists from all over the world. 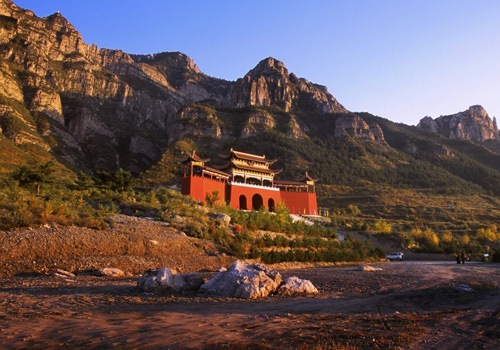 It is recorded in Chinese history that one day Emperor Shun (circa 2372 BC) toured his northern domain and was so impressed by Mt. Hengshan that he proclaimed it "Bei Yue (北岳)", literally the North Mountain. In the following ages, many later emperors had come to visit Mt. Hengshan as well, which made a famous national attraction. Xu Xiake (徐霞客, 1587-1641), a renowned Chinese traveler living in Ming Dynasty (1368-1644), had also paid a visit to the mountain and left behind Hengshan-inspired writings.

Being a bottleneck to Central Hebei Plain. Mt. Hengshan was once a place of strategic importance in the ancient times and was utilized in national defense planning. Plenty of ancient battlefield relics litter the landscape with passes, fortresses, castles and beacon towers. These make Mt. Hengshan unique among the many famed mountains of China. 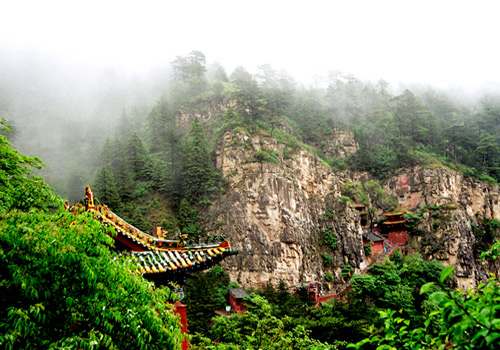 Mt. Hengshan is famous for its precipitous terrain, miraculous temples and marvelous springs. According to "Travels of Xu Xiake", there were 18 beautiful scenic sites in ancient Mt. Hengshan. However, only ten of them are in fair preservation.

Lying between Tianfeng Ridge (天峰岭)and Cuiping Peak (翠屏峰), the narrowest point of Golden Dragon Gorge is even less than 30 feet. It is recorded that this gorge has always been used as the gateway to the Central Plains in the ancient times. Neighboring deep canyons and steep cliff, Golden Dragon Gorge is a natural barrier and important transportation fortress. In the gorge, there is a plank road coiling around the cliff, called "Yun Ge" (云阁).

A large number of pines in Mt. Hengshan are of chic styles, especially four odd-shape pines of the Tang Dynasty. Though some roots of these four pines grow outside the rocks, the others still clutch the rocks tightly. 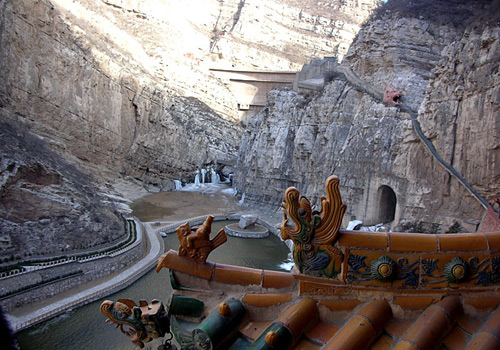 Mt. Hengshan is famous for Taoism and there are several Taoist temples. It is said that Zhang Guolao, one of the Eight Immortals, once cultivated vital energy in this mountain.  Among these temples, Beiyue Temple (北岳庙) is the most magnificent one in. Built in the Ming Dynasty, the temple leans against the Tianfeng Ridge. The front corridor of it displays a panorama picture of Mt. Hengshan and some stone tablets craved inscriptions about the memorial ceremonies, which can be used as important study materials of Chinese history.

Located at the foot of Mt. Hengshan, the Hanging Temple is the only temple blended with Buddhism, Taoism and Confucianism in China. The temple was built in Northern Wei Dynasty (386-534) on the high cliff hemmed in by a precipice. Looking up at the temple, tourists will see the pavilions supported by dozens of wooden pillars. Entering the temple, people will be surprised by its half-house and half-cave inner structures. 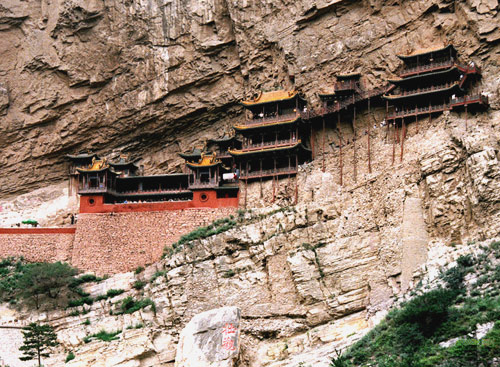 Located at the hillside of Mt. Hengshan, the Bitter-Sweet Wells are a couple of wells standing only about 1 meter away from each other. What makes the wells famous is the opposite taste of the water in them. Water in one of the wells is cool, refresh and sweet, so this well is called Sweet Well. Emperor Tangxuanzong of Tang Dynasty (618-907) has once conferred this well "Dragon Spring". On the contrary, water in the other well tastes bitter. Hence, it is called Bitter Well. Today, the Sweet and Bitter Wells have been closed.