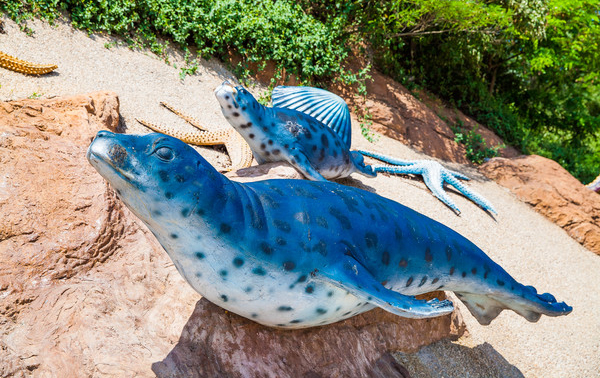 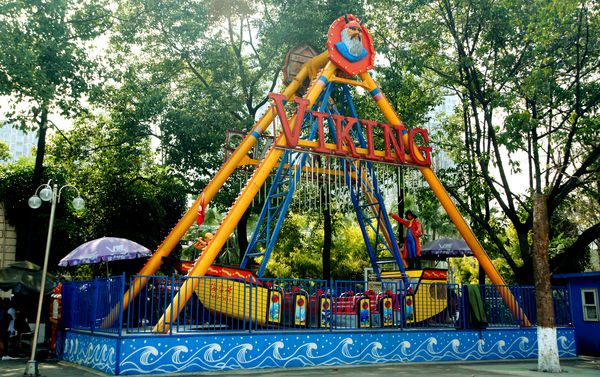 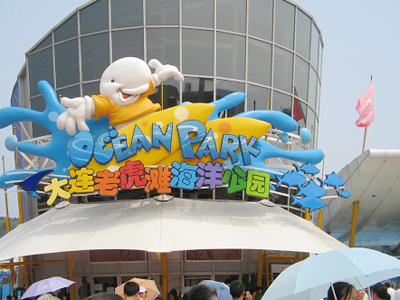 Tiger Beach Ocean Park is located in Dalia's Binhai District; it is China's largest beach and most modern beachside resort and has been awarded 5A-class attraction.

The Marine Animal Hall inside the Tiger Beach Ocean Park is the world's largest marine hall with the largest floor-space and largest volume of water of any marine park. The Marine Hall is three levels high with every level holding marine life from not just the Dalian region but from all over the world. The bottom level of the marine park has a "360 degree aqua experience" in which visitors can experience life under the sea from every angle.
Corals

Tiger Beach is also home to China's largest coral museum, holding over 200 types of corals from Southwest Pacific Ocean and is divided into several areas, such as Coral and Coral Reef Fish Area, Undersea Laboratory and Diving Performance Area. The 10-meter undersea tunnel enables visitors to see corals and coral reef fishes at a 90-degree angle.

There is a large performance pool in the Diving Performance Area, inside which crowds of fishes swim freely. The main performances include Fantastic Underwater Wedding, Mermaid, Underwater Ballet and Underwater Walking.
Animal Show Arena 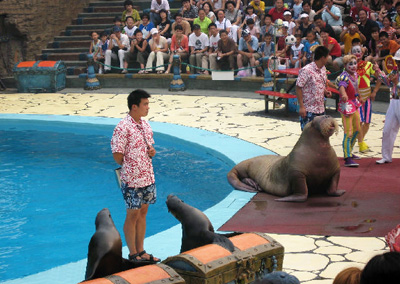 Along Tiger Beach there is an Animal Show Arena where daily shows are held and audiences are treated to the acrobatics and amazing intelligence of Dalian's smartest and best-trained sea-lions, seals and other animals, the arena holds 1,200 spectators. 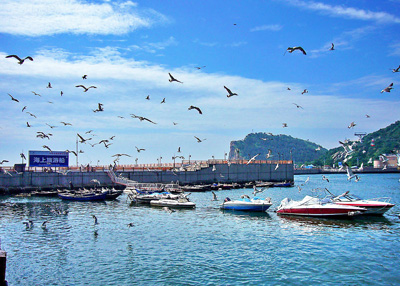 The Tiger Beach Avery is an enclosed forest of rare birds includes peacocks and other types of fowl, in total there are over 150 species of birds. Excellent performances of birds can also be viewed. 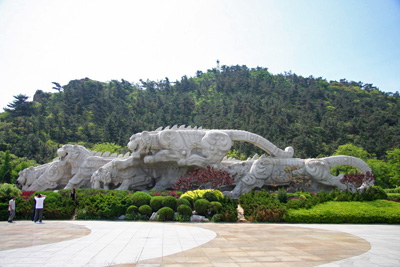 The Jurassic Adventure project looks like a primitive forest with eight dinosaur sculptures and 31 wild person statues. Visitors fly through this amazing trip back in time of specially designed boat which flows through rapids and white-water (210-meter long and 15-meter wide), making it both thrilling and educative.

Commissioned in the 1940's this original Soviet Era Frigate was purchased by the Chinese Navy in 1955 and served until the late 1980's when it was retired, travelers can now board the vessel and understand what conditions were like serving aboard a Chinese naval vessel and also learn more about the engagements it fought in.

This cinema holds 150 seats and plays movie synchronously by six large projectors, forming a 180-degree circular screen movie. The special effects in the cinema provide audiences a feeling as in the environment.

Different films all exploring life in and around Dalian as well as the undersea world that lays off its coast, not only is it in 3D but patrons may find themselves sprinkled with a light shower of water!

The 600 meters long cable car gives travelers a chance to experience the sea and Tiger Beach Park from above, peering down on the deep blue carpet of sea that surround Dalian, after riding above the sea tourists can gain a first-hand experience with ocean tour cruises taking visitors out into the open ocean.