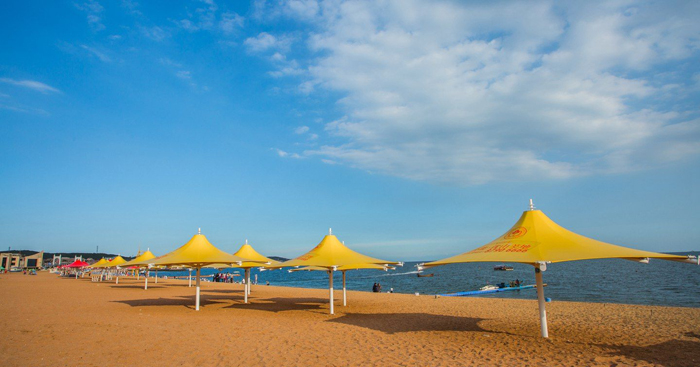 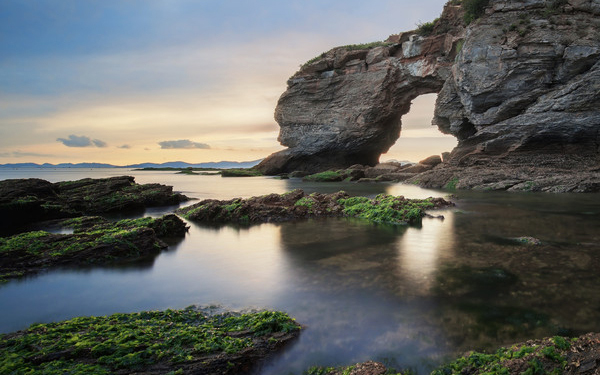 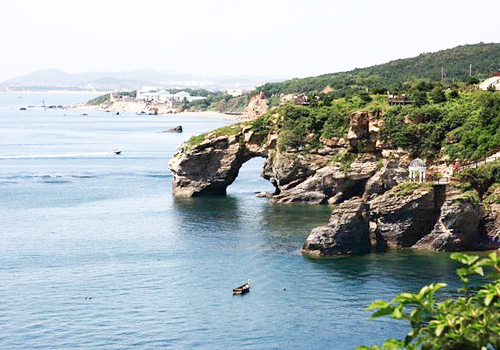 The climate of the region is an oceanic monsoon climate. With mild temperature and distinct four seasons, Jinshitan is among the best places for vacation and summering throughout the country. Fresh air, clean sea water and spacious beach along the coast line attract a larger number of tourists home and abroad every year. Jinshitan also is the location of the marine sports center where various trainings and competitions are carried out. Jinshitan Scenic Area is a tourist attraction integrating entertainment, living, food and visiting and it is the only seashore beach in Dalian which has not been changed to be a private enterprise.

The resort owns a breathtaking landscape. Along the 8 kilometers long coast, at the east part of the peninsula, splendid rocks formations constitute a natural museum of marine-erosion rocks, which formed from Sinian to Cambrian. Those vivid rock formations are of great scientific value and appreciation value. Visitors can see large numbers of strange rocks in various kinds of shapes and postures. Some rocks are similar to camels, turtles, dinosaurs, tigers, and so on. No wonder that it is named as the solidified animal world. The Longevous Rock is the biggest sediment rock with the clearest structure in the world, which was formed 600,000 years ago. Some other geological wonders, formed 300,000 to 600,000 years ago, also provide an interesting sight: some stone monkeys watching the sea, some birds spreading their wings, etc. 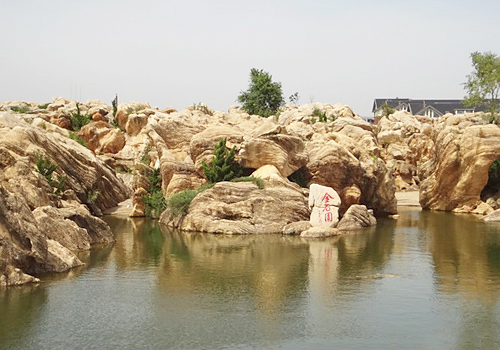 Located in the north side of Jinshi Road, Flower World is going to cover an area of 1 square kilometers. Till now, the flower exhibition hall of 3000 square meters, sunlight greenhouse of 10000 square meters, and modern greenhouse of 30000 square meters have been finished. Flower World is the largest flower production base and distributing center so far in China. The fresh cut flowers and seeds of carnation have won the national Silver Prize, and have started to export to foreign countries. In Flower World, visitors can appreciate or buy nearly 100 kinds of shade plants, fresh cut flowers, dried flower and any other flower products.

In luxurious and grand Europe style, Jinshi Wax Statue Museum is awarded as the "White House" in Jinshitan Scenic Area. Helped by lights, props and backgrounds, more than 100 wax statues are vivid and lifelike. According to the historical events and the real plots, the wax statues are divided into 13 themes: History, Hero, the Founding Fathers of China, Scientific Tunnel, Xi’an Incident, the World War II, the Diplomatic Relations between China and the United States, the Return of Hong Kong, the Light of Olympics, the Dream of Wanda, Waterloo Bridge, the World of Stars, the Elegant Demeanour of Women Volleyball Team. 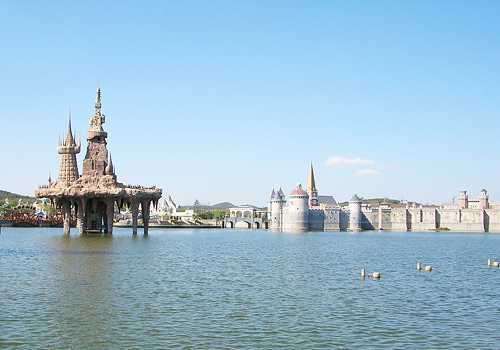 There are many other scenic spots in Jinshitan Scenic Area, such as the Movie and TV Art Center, Chinese Martial Arts Hall, International Yacht Club and Hot Spring Holliday Village.

Jinshitan Golf Club covers large greens of 17,500 square kilometers and it is surrounded by sea on three sides and by mountain on one side. The green lawn, the blue sky, and red flowers constitute an elegant and relaxed environment. There are 36 international standard fairways in the club and the putting greens are all set at the seaside, taking good advantage of the seashore. Among the 36 fairways, 7 fairways has been listed as one of the top 100 fairways in the world and the No. 7 fairway has been ranked as one of the most challenging fairways in the world.

There is a hunting ground in the western peninsula, which covers an area of 2,000,000 square kilometers. The Hunting Ground is equipped with modern facilities. There are a hunting area, caliber rifle shooting range, trapshooting field, paintball field, archery field and animal watching garden in the Hunting Ground, where you can carry out kinds of forest hunting and shooting, and any other entertainment activities. Wooden villas, comprehensive service building and hunter mountain villa are equipped with guest rooms, dining hall, sauna, dance halls and various indoor recreation facilities.