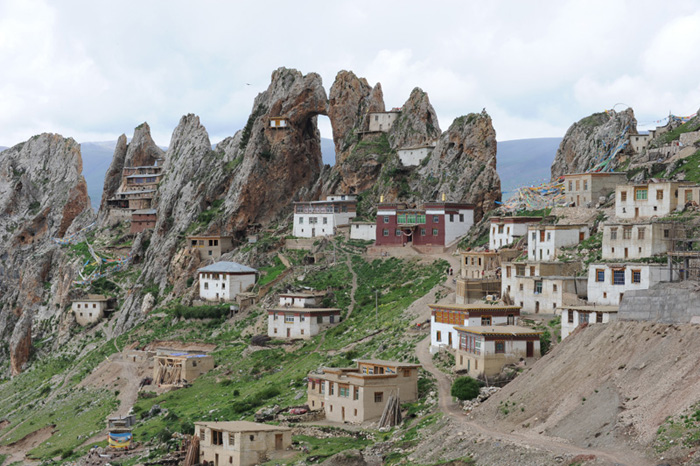 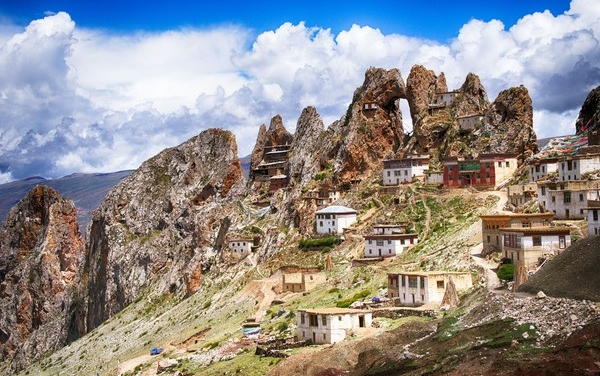 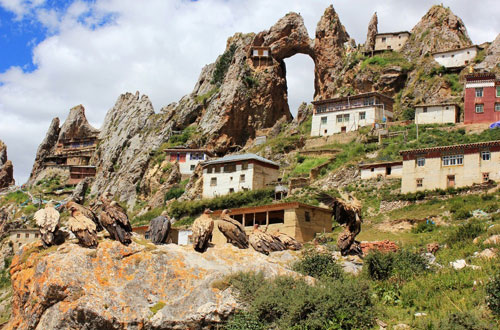 Chinese name: 孜珠寺 (Zi Zhu Si) Location: on Zezhol Mountain, Joren Township, 37 km from county seat of Dengqen, Chamdo (Qamdo) prefecture, Tibet Autonomous Region Opening time: 08:00-19:00 Ticket: CNY30 How to get there: there is a daily bus (08:20, CNY100, 7 hours) from Chamdo bus station to Dengqen County, and then you have to hire a car (3 hours). Best time to visit: June-August Tips: Walk the prayer path (totally three) in Zezhol Monastery in counterclockwise.

Zezhol Monastery is situated on the famous sacred Zezhol Mountain rising 4800 meters above sea level, at Dengqen County of Qamdo prefecture in Tibet. It is one of monasteries with highest elevation in Tibet, as well as one of oldest and most important monasteries of Tibetan Bon Religion, the oldest indigenous religion in Tibet. Zezhol Monastery boasts a history of over 3,000 years. It was then rebuilt by an eminent hierarch in 14th century when it began to take shape with scriptures and Buddha statues. Today it is presided by the 43rd Zezhol Living Buddha, the abbot of the monastery. Zezhol in Tibetan means six peaks, which represent the six perfections of Buddhism: giving, abstain, patience, vigor, meditation and wisidom. In Bon religion, there are four holy mountains - Mt. Gangdise in Ngari, Mt. Benri in Nyingchi, Mt. Zezhol in Chamdo and Mt. Meili in Yulong in Diqing Tibetan Autonomous Prefecture. Zezhol Monastery is also the largest of its kind in terms of size with the largest number of Bon followers and keeps the most complete tradition of Bon religion in Kham (Eastern Tibet). Gshen rab mi bo (Xinrao Miwo) once preached Buddhism in Mt. Zezhol. In history 82 gurus once cultivated themselves in Zezhol Monastery and left many precious relics, such as finger prints, footprints, Buddha statues, mantras. 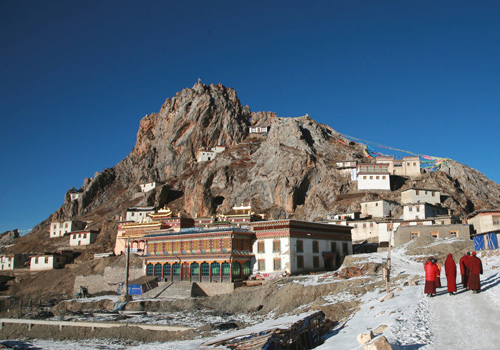 Tibetan Bon Religion had once dominated Tibet region before the emergence of Tibetan Buddhism. Though it was suppressed by Tibetan Buddhism and retreated to remote areas centered on Zezhol Monastery. There are still many Bon followers today. At its peak Zezhol Monastery once housed two or three thousand monks. Today it houses more than 200 monks. Bon religion believes that everything on the earth has a soul. The monastery has founded four schools for monks studying Buddhist sutras and practice Buddhism. In recent years, many followers from inland China funded to construct a road to Zezhol Monastery. The best time to visit Zezhol Monastery is from late June to mid August. There is annual Dharma Assembly in late June. Every 12 year, Zezhol Monastery hosts a grand holy religious dancing – naked group dancing called "Paradise and Hell".