Las Vegas being too far away, we decided to make a one-day trip to Macau, an ancient Portuguese colony and nowadays a gambling paradise, which is close to Hong Kong. The trip by the turbo Jet boat was during one hour (costs for a round trip ca 300HK$). Arriving at the port, we were welcomed by the forthcoming shuttle busses to the Hotels. We took the bus to the "Whynn Hotel" (only for us) and five minutes later we were standing within a huge lobby with a view into the green garden behind. As tourists walking through the hotels are common we could have a look at the amazing casino and have a rest in the restaurant there. After leaving the Hotel we took a taxi (the starting price is about 16MOP) to the "Senado Square". Being astonished by the beautiful ancient colonial houses surrounded by huge hotels and casinos we drifted through the streets. Finally, we reached an upward street with lots of Chinese food stores, where the sellers offered fried pork (it looks quite strange but it is worth tasting it!), biscuits and other interesting food to taste. At the end of the street we found ourselves at the most important sight of Macau, the "Ruinas de Sao Paolo". If you climb it up, you have a good view over the whole district and the hotels. As it was a bit overcrowded by tourists, we soon took a taxi to the "Guia Fortress", which is the highest point of Macau. From there you have a wonderful sight all over the city. Surprisingly we were nearly alone and made a small walk around the building to enjoy the view and the silence. The small cable car back down into the city is a must-do! 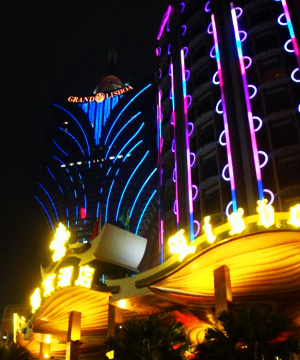 When it got dark the Hotels started their lightshow. We spent quite some time watching the Grand Lisboa Casino and the fountains in front of the “Whynn Hotel”, which perform some kind of dance every 15 minutes in step with classical music. Unfortunately we did not have the time to visit the Venetian Hotel, which is located on Tapia (you have to cross a huge bridge to get there), but due to the information of a friend, a gondola ride there under fake sky and with an Italian singer is worth its money!

I also tasted the fried pork before, but it was from Xiamen,Fujian Province, i am wondering if it is same with the kind which you had[F]What[/F]

Unfortunatley I did not take a picture of it. Was it also cut with scissors? At least there they offered it like this! :)

Welcome to VisitOurChina's Travel Blog and thanks for your comment.We are glad that you like this article, and we sincerely hope that our blog will be helpful for your travel experience in China.