Your Position: Home VOC's Travel BLOGWorking at VisitOurChinaInvestigation about Hotels in Yangshuo

Definitely, hotels are important for travelers and the travel agents, as one of the famous travel agency, we, the English department members of visit our China, made an investigation about the hotels in Yangshuo this weekend. We were eager to find some hotels with perfect location, environment and at more reasonable prices to better fits the demand of our friends and guests all from the world. The weather was fine, and the results looked good.
Day 1 19th September, 2009     Guilin-Yangshuo
Our bus left at about 10AM and the time on the bus was good for me because one of our guests, Guenter, came with us to Yangshuo. He is at 71 old years old but is a man of incredible energy, we had a great talk during the driving, he was in crazy love of traveling, especially in traveling by bike. He is informed and knows many things and languages which helped me a lot to better understand him and the world outside. It would be a busy two days, so some of my colleague were resting in the bus.
We arrived in Yangshuo after one hour and more and after the check-in to the new west street hotel and the simple lunch; we started our works at noon.
We had 4 members in my group and our main target was having a brief investigation to the hotel in some assigned roads in and around the county center in Yangshuo. We introduced ourselves to those hotel staffs, enquired them for basic but detailed information about the hotels, we checked the rooms and had photos of their supplements and environments, exchanged cards and the investigation was played very well.
Our worked was done during the hottest time in a day, inevitably, everybody felt tired and thirsty but fortunately, we found many hotels very cheap but with good rooms in it, most of them were not commonly listed or even known on the internet, we will surely list them out and introduce the best ones to our customers in the near future.
September was the high season for tourism, domestic and foreign friends can be seen everywhere. It was quite often to see guests enquiring at the hotel reception desk or searching their interested things all alone the street.
We visited the Aiyuan hotel and Yangshuo Regency Holiday Hotel in the afternoon. Which attracted me most was the Aiyuan hotel, it was really great. With only hundreds of RMB, foreign fiends can enjoy such a perfect hotel. How I admired them, lol. With wooden rooms and special decoration, the 3 star Aiyuan looks much better than a 4 star one! With 5 floors and over 70 rooms at different prices, the hotel is perfect in my opinion. I felt honored that it had been our recommended 3 star hotel in Yangshuo for so long. It is located beside the entrance of the west street; I guess the only drawback for this hotel is natured, that is the sunlight burns one side of the walls and make the room and the balcony hot. But it is no problem to stay in this comfortable hotel because the air-condition and the elevator makes Aiyuan hotel a perfect one compared to other 3 star hotels in Yangshuo. So do you want to try it by your own? Just do it, it is absolutely worthy! 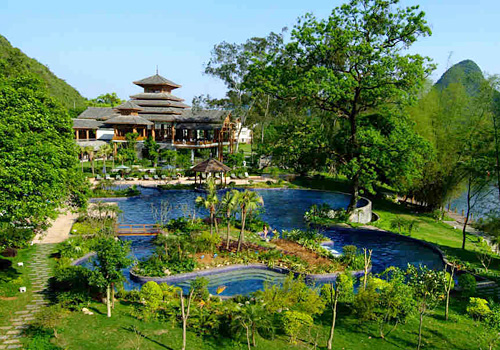 After a wonderful dinner at Meiyou restaurant, we enjoyed some free time at the night, all in all, it was a busy but great day.
Day 2 20th September, 2009     Yangshuo-Guilin
Today , we were invited to visit the new-built 5 star hotel-the Yangshuo Resort hotel; it will be the second 5 star hotel beside Yangshuo Green Lotus Hotel. It was also a fine day today, the sun raised very early in the morning.
We were picked up by the hotel bus at about 10AM and were transferred to the hotel close to the Yulong River. It cost us only 7 minutes driving to there, after that, the on building hotel went into our eyes.
The whole hotel was still on the building projects but it was easy to recognize that it will be a spectacular one than ever. The hotel is themed in country vacations, it is built along the river and among the hills, and everything is a perfect picture.
The entrance of the hotel is wide and bright, with other two building surrounding, it looks splendid. The marketing managers introduced the hotel to us in details, about the structure, the ideas, the rooms, everything. The Yangshuo Resort Hotel is characteristic, the 1000 square meters swimming pool, the own cultivated garden for nature vegetables, the corridor along the tranquil river, the landscape of a peaceful country life… Although the hotel is on built, nothing could stop the imagination of infinite beauty to grow.
It costs hundreds of millions to build the hotel. It will be the first hotel in Yangshuo which combines the modern and the ancient but traditional building together. There is no doubt that it will shock the tourists all over the world.
The No. 7 and No. 8 building will welcome its first group of guests on 25th this month, and the hotel will open formally to public in the coming October soon, how exited, right?
We finished our work and the investigation in the late afternoon and backed to Guilin, it was a tried but wonderful two days because we had a better understanding of the hotels and the tourism itself in Yangshuo. 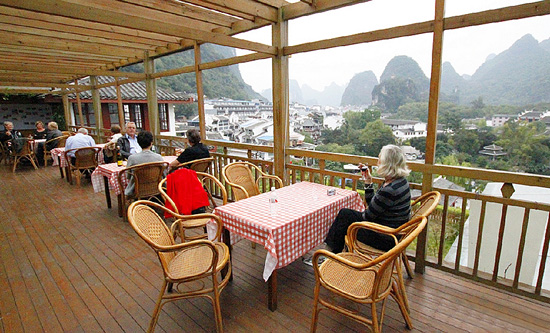