This is my first time to take part in some sport affairs as a company member after graduation from university. Although I had played many football games when I was a student, the feeling I had this time was totally different. 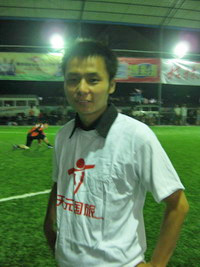 We have some really good players in the company; it is hard to find some male players who are good at some sport games in an international travel agency, because the total number of the male is much less than the female! We are quite lucky, isn't it? 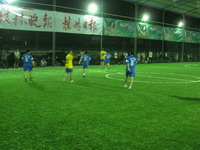 As time went by, more and more colleagues went to cheer for our team. Our players performed better and better and we had a lot of fun together. As an informal coach, I tried my best to encourage them. It was funny when I was over excited because I will follow the players walking from one side of the field to another, and repeat it over and over again. My running and shouting outside the game disturbed the official coaches in recording the game details so I got warned, but it was really funny because I will not so talkative when there was not sport games.

Not only my colleagues but also the bosses of the company encouraged us, and we put on our company uniform T-shirt together, the feeling was great because this was my first time to feel there is someone outside the 5 players also cheers for the game. We are a team; everybody is one part of the game, the joy and the sorrow, everything.

In my opinion, sometimes those girls were really excited, especially when there were chances to goal, they shouted, laughed and signed. They will not waste any chance to take pictures. Girls, girls... oh my god! :) 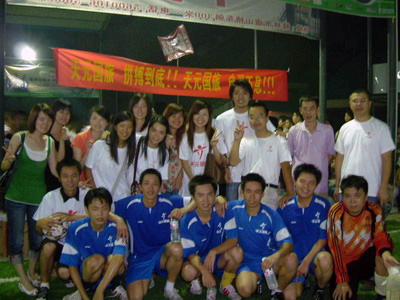 I will definitely take part in this football game in the next year because I think at that time, my injured ankle will be completely recovered. And I am sure we will be much stronger then.