Sunday, 14.06.2009
On Sunday morning we were picked up at 9am by our local tour guide Nancy for the day trip to Suzhou. Suzhou is a famed silk production centre and a celebrated retreat brimming with gardens and canals. The drive by car took us 2 hours. First of all we visited Humble Administrator’s Garden, a garden dating back to the 1500s. The architecture of this place was stunning. The creator of this garden had made use of pavilions, water and plants to become a unity. 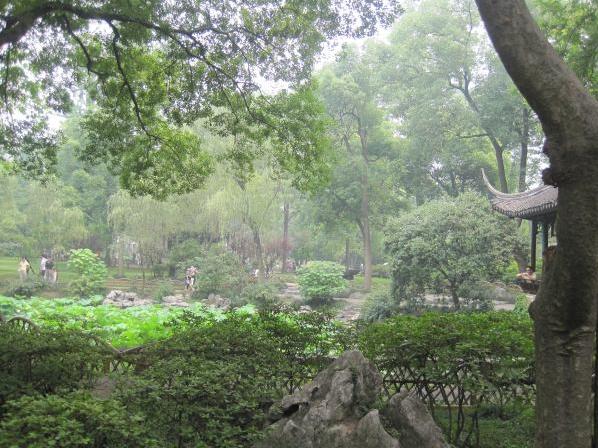 For that he used some important principles of Chinese gardening. These were later very good explained in the Suzhou Garden Museum which is part of Humble Administrator’s Garden. Unfortunately the first rooms and pictures are very old, so we would not have entered them without Nancy. But after passing the Exit after three buildings you enter the new part of it which is very modern and nicely made. I strongly recommend going there as it helps you understanding how Chinese gardening architecture works, as it differs a lot from French gardens as we have them in Europe. As it is usually not included in Day-Trips you might ask your tour guide to lead you to this place. When we wanted to enter the Suzhou Museum, the entrance was denied to me because I was wearing Flip Flops. Since the beginning of June they have a “law” which does not allow visitors to enter with open shoes made out of plastic like Flip Flops – Crocs are allowed by the way. So do not forget to wear suitable shoes for this excursion if you do not want to buy shoes at the shop next door of the museum. Then we went by car to the “Silk Factory No. 1”. First we got lunch there, at a place where many tourists are brought to. As I am in the tourism business I usually dislike these places because they do not show people what “real China” is and tastes like. But I have to admit that the food was quite good. Then we attended a show where some mannequins presented clothes made out of silk and finally were introduced into the production of silk in the factory. The guide showed us how the silk was made out of the cocoons of silkworms. From out of one cocoon you can get approximately 1km of thin but resistant string. Afterwards we did a cruise on an old boat on a canal. 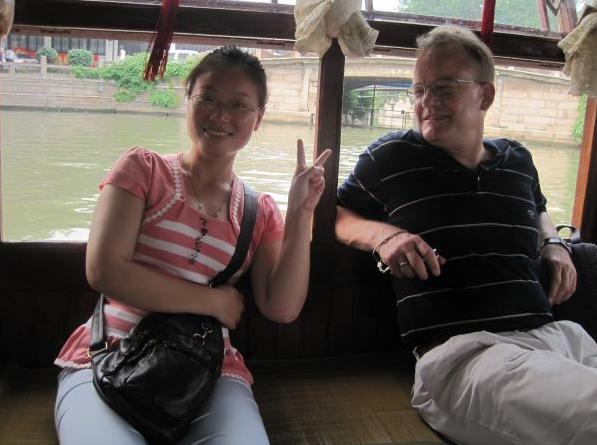 This was very interesting for all of us because you could see how local people lived, we passed by when they were washing their clothes in the canal, cooking food and played with children. Finally we took the taxi back to Shanghai where we first had to take a break at “element fresh” an American food chain where they serve exclusively fresh food like smoothies and sandwiches. This night we decided to have dinner at the “Seagull at the Bund”. The, relatively small, hotel has a restaurant with a huge terrace where you can sit outside to enjoy the view on the Huangpu River and the Skyline of Pudong. The food was extremely delicious, nicely presented and especially not expensive as we had expected it to be. At the end of the day we enjoyed some cocktails at “Barbarossa”, one of Shanghai's most famous upscale nightlife venues, for its beautiful location in People's Park and its three floors of lush interiors. The cocktails were extremely good and my brother also ordered a water pipe. Looking back I have to say that it was one more of the places you would not expect in Shanghai and especially my father was delighted by it.
Monday, 15.06.2009
This was our last day in Shanghai. After breakfast we packed our bags and checked out of the hotel, but left our luggage there. Then we took a taxi to Pudong, to visit the Oriental Pearl Tower. 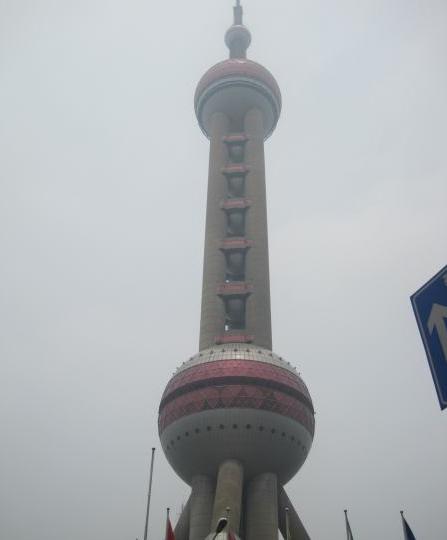 The building is a work of art by itself and very impressing. As the weather was a little bit misty we decided to go to “Super Brand Mall”, Asia’s biggest shopping mall which is located next to the tower. The mall was great, we especially liked that most of the shops were affordable brands, where we also could do some shopping (which we did actually). We had lunch at “element fresh” while having a great view on the skyline of the Bund 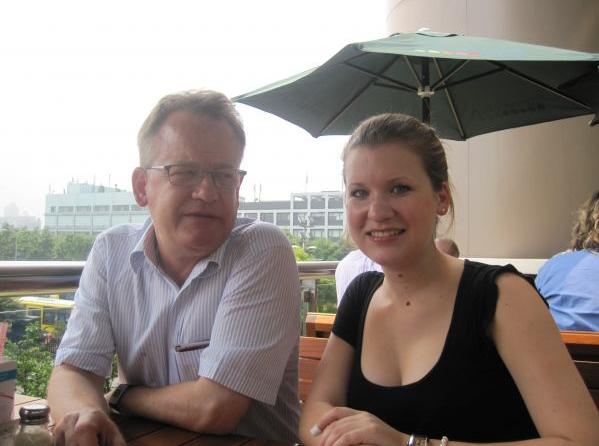 and then walked to JinMao Tower. On our way we passed several enormous building lots; due to the Expo 2010 which is going to be in Shanghai, they are (re-)building even more than they usually do. We took the elevator to the 54 storey, the first storey of the Grand Hyatt, which is in the tower. 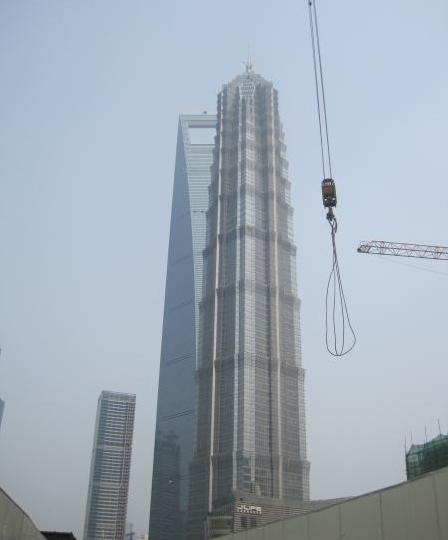 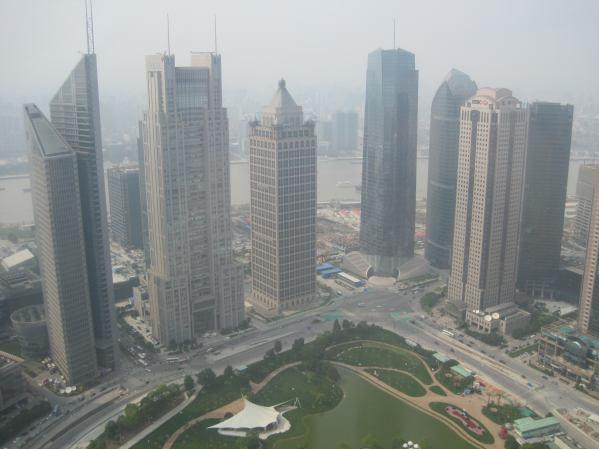 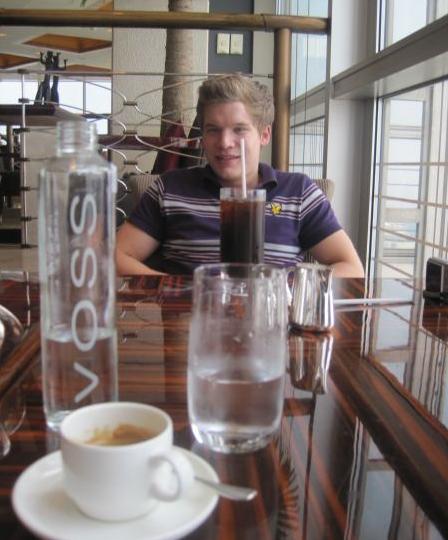 We then took another elevator to get to the highest level within the hotel (85th level) to have a look down into the lobby. Finally we went down again to have some drinks in the restaurant of the hotel and to enjoy the view on the surrounding area. However at this storey the SWFC Building next to us was still twice as high as we were. So we took the elevator to get down and crossed the street to enter the SWFT-Building. Actually it has the highest public observatory in the world, located 474m high over Shanghai. 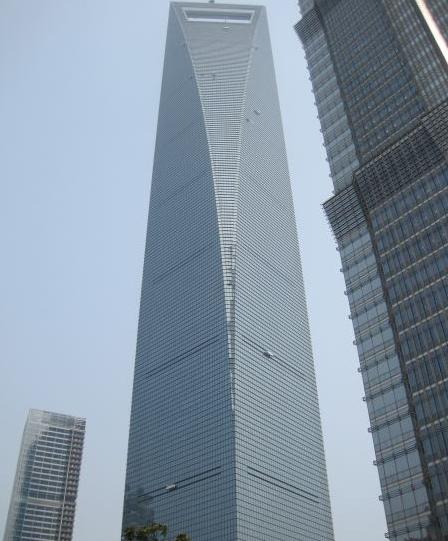 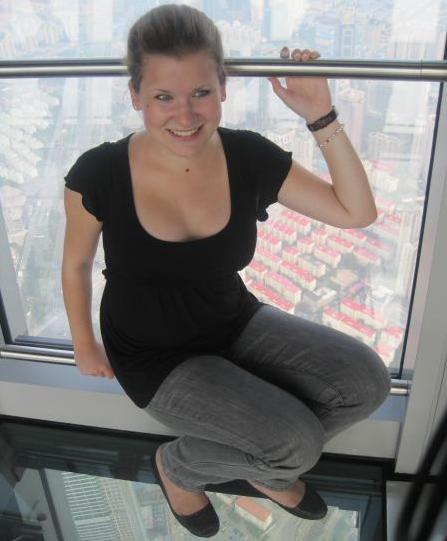 It costs 150RMB per person to get to the very top but this money is a good investment! The rise by elevator reminded me of a time machine and everything was perfectly organized. When we finally came to the top level I was deeply impressed by the scenery: Pudong stretching out on the right hand side; Huangpu River and Puxi stretching out on the left hand side. 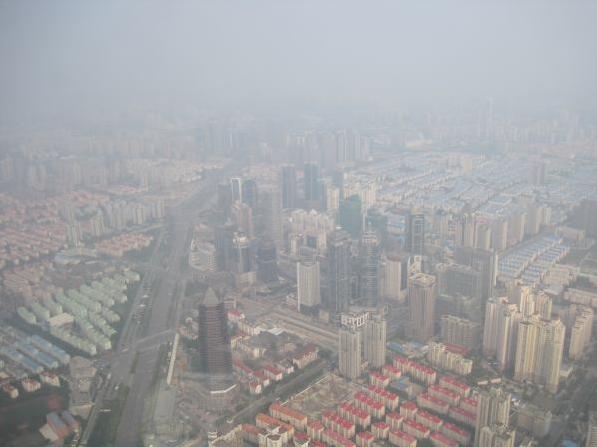 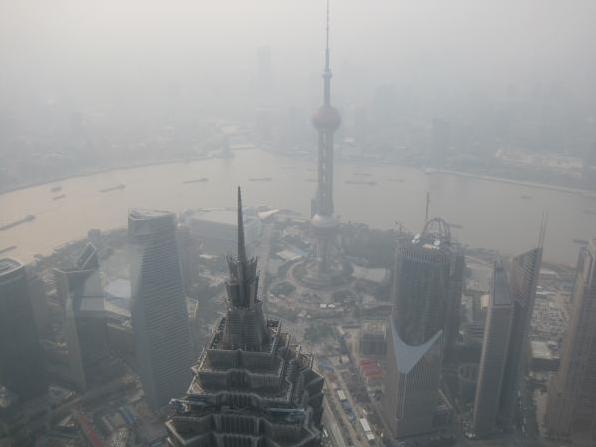 Even JinMao Tower, which used to be the highest building before the “bottle opener” (it got its name because its form strongly reminds people of a bottle opener) seemed to be little. The weather was quite good and so we could see a lot of the area around us. The walls were made out of glass from the bottom to the top, the ceiling was made out of mirrors and the floor was black glass, with some clear glass in between, so you could look down under your feet. Being deeply impressed by this architectural highlight (built by Japanese) we spent a lot of time there before getting down to the ground (within app. 50 seconds) and walking around the streets of Pudong. Finally we found our way through building lots and skyscrapers to the ferry which brought us (for 2RMB each) directly to the dock at the Bund. 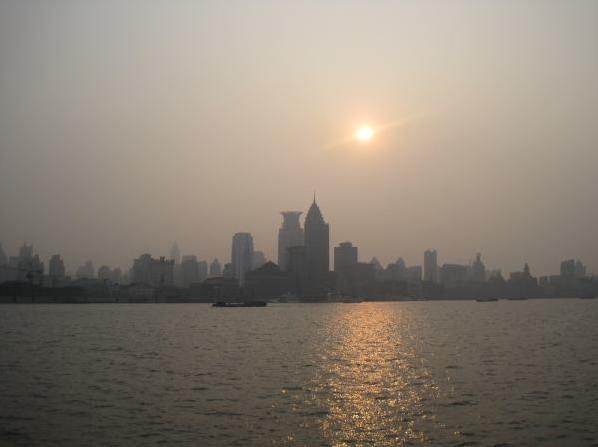 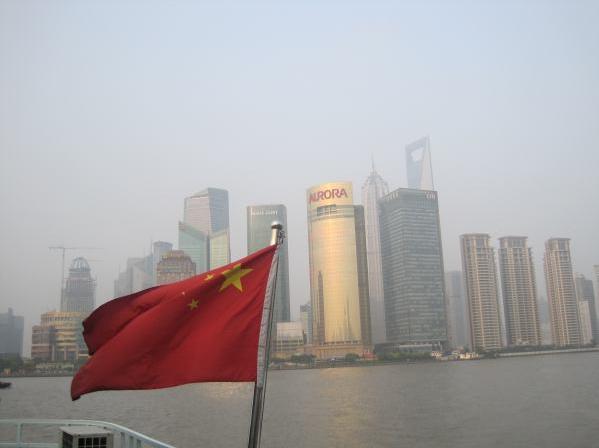 So we also could enjoy both skylines from the water during the sundown, which was very beautiful. We took a taxi to XinTianDi again, to have a typical German dish and another Weissbier at the Paulaner Beer garden. 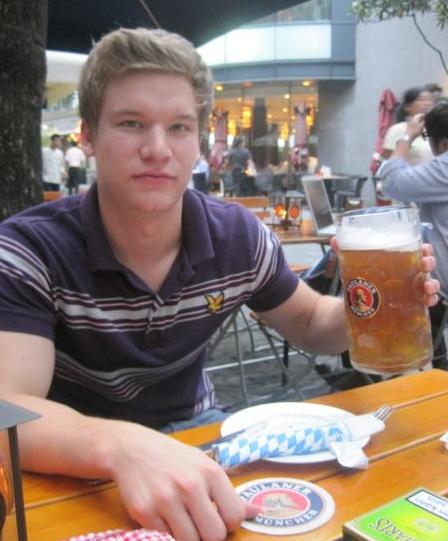 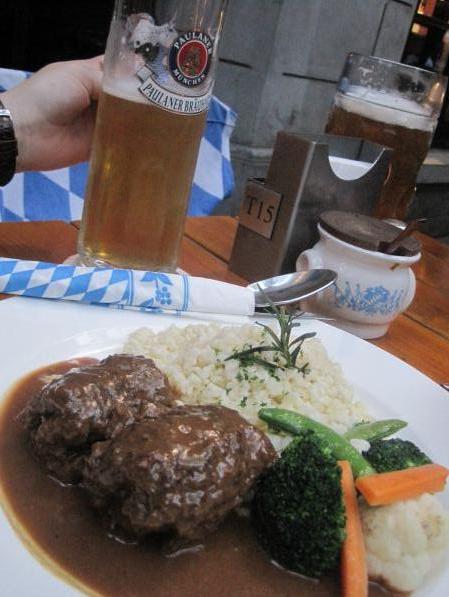 Then it was time to say good bye at the hotel. My father and Andi had to take a taxi to Pudong airport and I was flying back to Guilin from Hongqiao airport. All of us were sad to say good bye, because this reunion in that city had been a great time for each of us. Andi would have liked to stay longer, my father now knows in which city he is doing business sometimes and I can imagine living and working there one day. I simply fell in love with Shanghai!
Tags: Shanghai Suzhou Humble Administrators Garden Silk Factory No. 1 JinMao Tower SFWC Huangpu River XinTianDi Grand Hyatt Shanghai