Your Position: Home VOC's Travel BLOGChina FoodA Bite of China- the secret of steam in the kitchen

In comparison with western cuisines which employ fresh material without cooking, Chinese cuisines pay more attention to the appetizing color, scent, flavor, shape and utensils. Apart from the food material, cooking ways are more important. For over 8000 years, Chinese chefs have experienced three significant leaps from boil to steam, and to fry, the common essence of which are all the regulate and control between water and fire. To accomplish all the conceptions in a dish, each Chinese chef is a magician who can play the game with water and fire supremely well. Up to now, Chinese is the only nation in the world who masters the skills of both steam and fry.
Steam is a basic cooking method in Chinese kitchen. Chinese created the cooking way of steam and meanwhile created a great deal of steamed dishes. Before the fry was invented which use the oil to quicken the heating, steam is considered the faster way for heating and the easier way to maintain the original shape of food material than boil. In the history, the Chinese character of steam enjoys the same meaning with the character of sacrifice, which has strict requirements for the complete shape of sacrificial offerings.

Yunan-style steamed chicken (汽锅鸡), is a famous Kunming dish cooked in purple sand pottery pots with the method combining both boil and steam. The boiled soup evaporates to be steam, which rises to each layer of the pots and then liquefies to soup again; the active steam circulates among soup and each layer of the material can stimulate furthest the wonderful taste of both soup and chicken.
In Chinese kitchen, the way of steam is used more in the making of main food, for example, the steamed stuffed buns. To envelop various kinds of fillings with wheaten wrapper, and to steam in a bamboo steamer; when the fillings are done, the skins are still complete. The steamed buns of Yangzhou, the flourishing place of Huaiyang Cuisine, are delicate and tasty with succulent soup, which may embarrass these people who take the first taste of Yangzhou Steamed Buns. 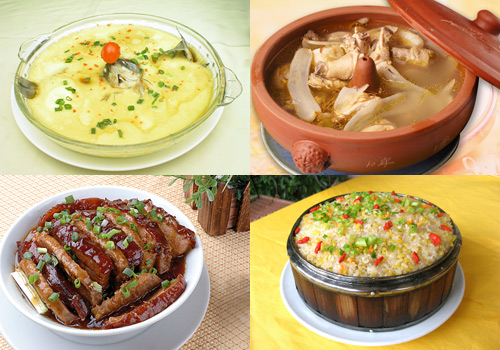 Shunde county of Guangdong Province, a famous hometown of gourmets with West River flowing through, enjoys a rapid expansion in economy, yet maintain an eternally immutable custom- the village banquets. In Shunde, there are more than 1 million people who are served by over 300 village banquet chefs. During Chinese festivals or celebrations, weddings or funerals, Shunde people are willing to get together and taste the economic dainties created by their village banquet chefs. During the festivals, village banquets are on show in different villages each day, and the successive boisterous scenes remind the young people repeatedly the significance of showing respect for the elderly. As the protagonists in the village banquet, the elders will receive the red envelopes and the blessings from the young generation. From the past’s sacrifice to today’s celebrations, such banquet let people make friendly contacts and strengthen the affections time and again with the carrier of dainties.
Food material is one of the keys of a successful village banquet. The site of the banquet is in the open air and not fixed, and the kitchen is set up temporarily. The kitchen seemingly with no secret but has to fulfill the most critical mouths in Guangdong. To make a village banquet, the chef needs helps from some diligent and skillful housewives who can in charge of a mass of preparations.
In a Chinese village banquet, steamed dishes are always the leading roles. Steamed Pork with Pachyrhizua Angulatus (粉葛蒸肉), a kind of Chinese steamed pork, is greatly different because of the join of the Pachyrhizua Angulatus; This farinaceous food can defuse the greasy of fat and perfectly balance out its sweet with the scent of pork. With the meat being melted in the mouth, it is the most appropriate dish to serve the elders. 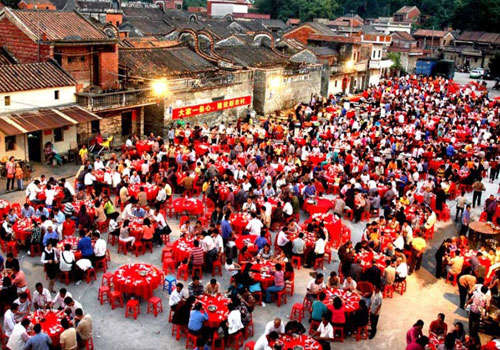 Compare with bowls of Steamed Pork with Pachyrhizua Angulatus, to steam a whole pig is difficult; while the movement of the steam, which makes the heats diffuse within the steamer equally, make it possible to steam a complete pig. The pig should be about 50 kg in weight; to keep the fresh taste, chefs quickly clear the pig, cut out the inside meat with gaps, and then preserve with salt, sugar, five spice powder, sesame, and rice wine for about 3 hours. Chinese love hot dishes; to make a steamed whole pig which need to be preserved first for a long time, it requires a refined calculation of the banquet time. After preserved, to add the rice wine again and then put the pig in a large steamer for steaming for about 35 minutes. For the moment, prick the pork with a specially-made nail brush to let superfluous fat runout. After, to stimulate the meat with ice water, which can shrink pigskin to be tenacious in the taste. After that, to steam for another 20 minutes, the dish is done. Steamed whole pig is often the final dish on the table; to let more than one thousand people to share the best hot flavor, chefs have to cut the pig into pieces as quickly as possible and mixed sesames and sesame oil lastly before serving.
Only a native chef can seize the picky tastes of locals in a successful village banquet; this is the secret of the kitchen, the combination of dainties and the reunion. For a professional chef, the secret in his kitchen is the wealth throughout his life, while for the ordinaries, the secret of kitchen is always link together with the affections and memory.
---By April (VisitOurChina)
Tags: Chinese food steamed dishes steamed buns steamed pork village banquet