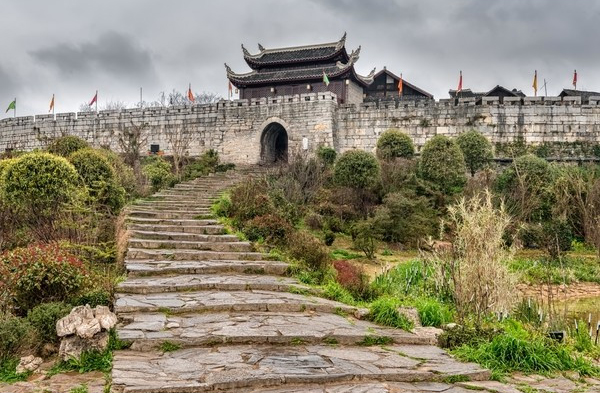 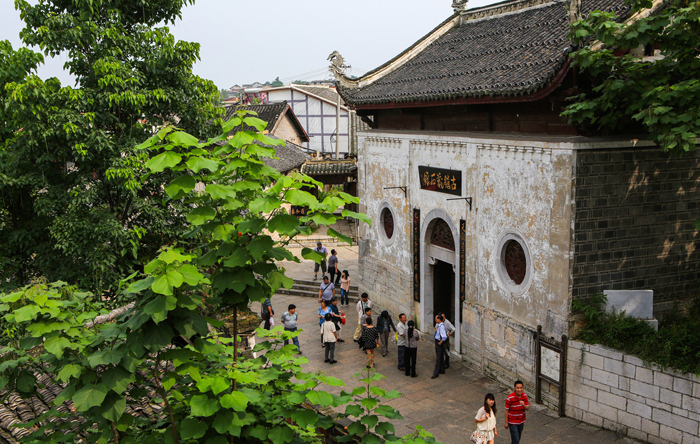 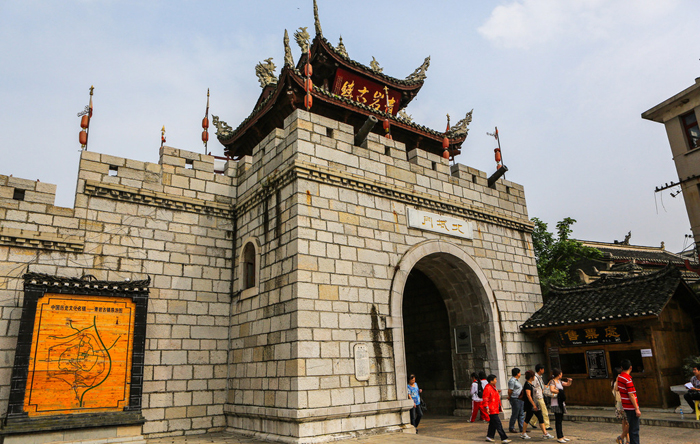 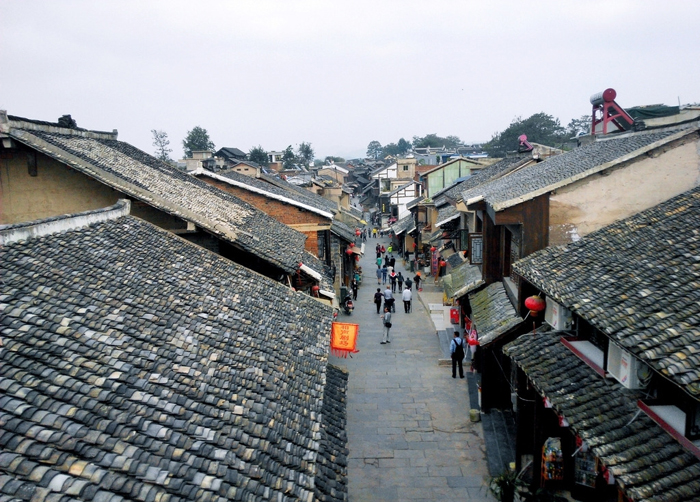 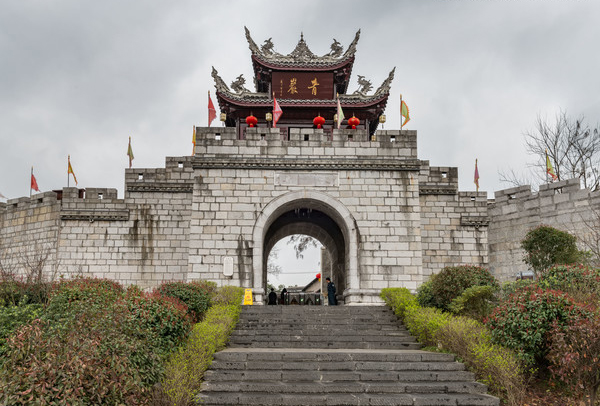 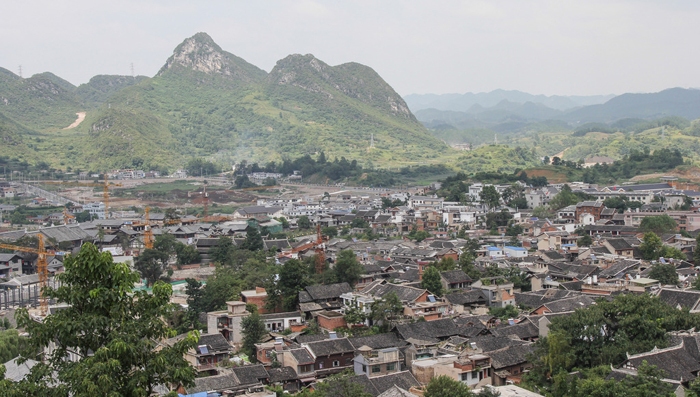 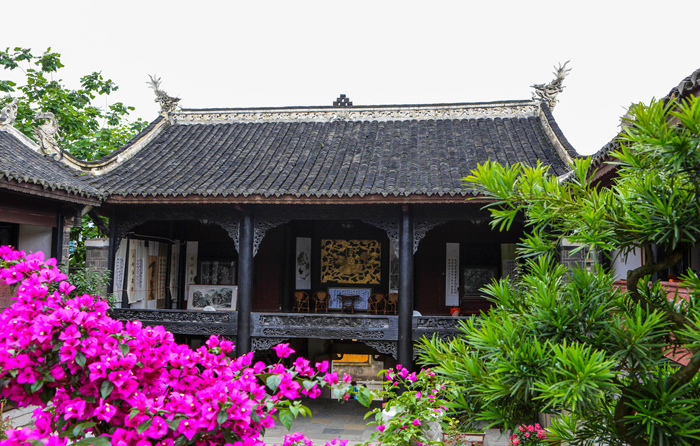 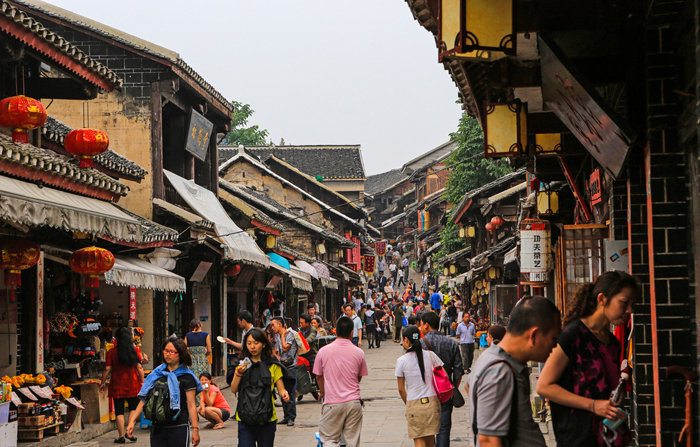 
Chinese name: 青岩古镇 (Qingyan Guzhen)
Location: southern suburb of Guiyang City, 29 kilometers from city center, 12 kilometers south to Huaxi, Guizhou Province.
Ticket: free
Opening time: all day long
How to get to Qingyan Ancient Town:
- take direct bus No.210 at Hebin Park (河滨公园), and it will take about 1 hour;
- take coach at Guiyang Coach Station at No.32 West Yan’an Road, and it will take about 50 minutes.

A military ancient town built some 620 years ago during Ming Dynasty (1368-1644), the Qingyan Ancient Town is one of the most fascinating town of China, as well as a famous historical and cultural ancient town inhabited by multi ethnic groups under the provincial protection with profound cultures in history, architecture, religion, farming, cuisine, and revolutionary tradition. 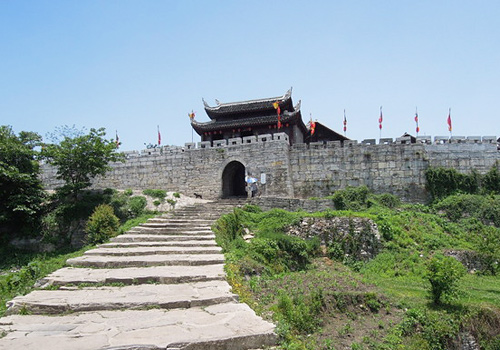 The interlaced architectures that densely covered in this archaic Qingyan Town were masterly designed with exquisite workmanship in the styles of Ming and Qing (1644-1911) dynasties. Here are temples, pavilions, ancestral temples, memorial archways, residences, city walls, crenels, batteries, etc. Originally an earth town, Qingyan Town has been built into a stone one after centuries’ development because of the local karst landform with sufficient stones. The crisscross green-stone-paved paths, long and narrow lanes, piling up stone houses, stone or wooden counters, delicate carvings on gates and windows, and the mighty stone lions, all indicate the ancient stories of the town and its full-bodied local color. More marvelously in Qingyan Ancinet Town, the Buddhist temples, Christ Church and Catholic Church are existing together in the meantime in such a small town not over 3 square kilometers.

Built in early Ming Dynasty in 1378, Qingyan Town was built by the central government to dominate this southwest frontier, and a military outpost was set up in the area of present Qingyan Town. From 1624 to 1627, the leader of Buyi Minority firstly built the Qingyan Town with earth and ruled 72 Zhai (subdivided area). As a vital fortress with its special location, the town was gradually recreated with the materials of stones, and the circled city walls were just built on cliffs with four city gates in four directions. Though only covering 3 square kilometers, nearly 100 historical and cultural attractions can be found in Qingyan Town, there are nine Buddhist temples, eight ancestral temples, three palace halls, three pavilions, an academy, three ancient stone archways, city walls and many former residences of celebrities. In the history, Qingyan Ancient Town was a place of gathering of talents, the famous scholar of early Qing Dynasty, Zhou Yuhuang, the Number One scholar (who won the final imperial exam) in late Qing Dynasty Zhao Yijiong (who is also the first person won Number one in the exam from Guizhou Province), and as a operational headquarters during the Long Marches (1934-1936), numerous famous revolutionaries and their family members lived here secretly, such as Li Kenong, Zhou Enlai’s father, Deng Yingchao’ mother, and so on. 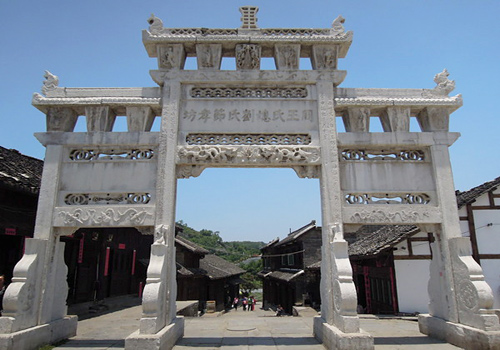 Inside and outside the four city gates of Qingyan Town, there were totally eight memorial archways, while only three of them are left today with the ones inside and outside the south gate, and the outside of north gate. The three are basically built in same style and shape, with four pillars, a height of 9.5 meters and a width of 9 meters; they are amazingly erecting on the ground directly without foundation ditch. These unique archways are always the best shots for shutterbugs.

Also known as Qingyan Stone Town, most of the residences in Qingyan Ancient Town are built with stones which are mortared with sticky rice milk. Stone walls, paths, counters, courtyards, mills, grinds and vats can be seen everywhere in the town.

Bei Street is the most characteristic stone lane in Qingyan Ancient Town. For several centuries, the surface of paved green stones have been polished so bright that can serve as a mirror. Though narrow, it is peaceful in the street. It is the famous site for shutterbugs as well as the place offers most attractions of the town. 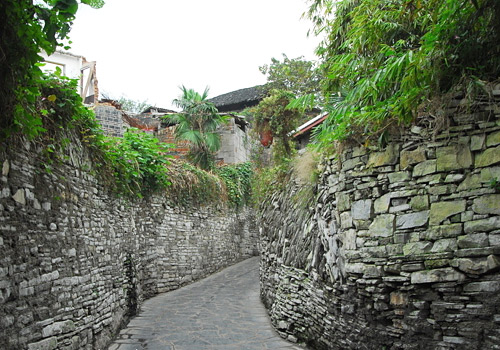 Located in No.1 Zhuangyuan Street, it is the former residence of the first Zhuangyuan (number one scholar in final imperial exam in ancient China) of Guizhou Province Zhao Yijiong. The antithetical couplet on the main gate just reveals the ambitions of the master. Covering 700 square meters, the mansion is dominant by wood structure, and on the wall of the Chaomen are kinds of the Chinese character Shou (寿, means longevity) wrote in diverse calligraphic styles.

Located in No.143 East Street and covering more than 800 square meters, Wenchang Pavilion is a post and panel structure built in Ming Dynasty in the style of Chinese pavilion with eight-angle-eave. It was the gathering place for scholars in the past.

It is located in No.5 North Street. Covering nearly 2000 square meters and built during the rein of Emperor Kangxi (1654-1722) of Qing Dynasty, the temple is well preserved and its stone plinths are the essence of stone carvings.

Adjacent to Ciyun Temple, it is situated in No.3 West Street. Built during the rein of Emperor Kangxi of Qing Dynasty, it was originally a gathering hall for merchants and renovated into a Taoist temple later. The palace is consists of a main hall, side halls, theatrical stage and living quarters. The highlight of the palace is the theatrical stage, which has delicate wooden carvings and a group of basso-relievo themed by famous historic stories. 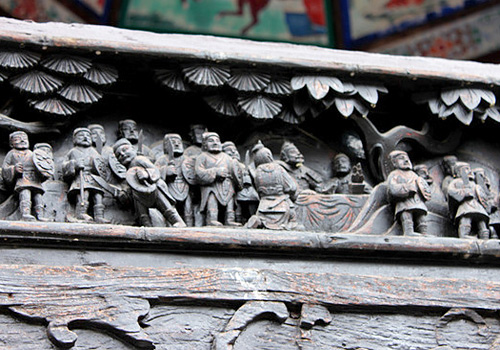 Seated at the foot of a hill at the west of South Street, the temple was built in Ming Dynasty. It is a famous temple in Guiyang City, in which there are the Hall of Heavenly Kings enshrining the Maitreya and the Four Heavenly Kings, the Mahavira Hall enshrining Sakyamuni, Manjusri and Samantabhadra. It is astonished that an immortal of Taoism Toumu is also enshrined in the back hall together with the Avalokiteshvara.

Owing to its remote location and the safety, Qingyan Ancient Town serves as a shelter for revolutionaries and their family members during the Anti-Japanese War (1937-1945). The residence for relatives of Li Kenong was in No.10 North Street, the residence for Deng Yingchao’s mother was in No.75 South Street, which serves as a private restaurant today, and the one for the father of Zhou Enlai was in No.2 Bei Street, which has been opened to visitors.