Aksu, or Aqsu, some 989km to the provincial capital Urumqi and 466km to Kashgar, is located in the west of autonomous region of Xinjiang. The entire prefecture of Aksu occupies the northwest part of Tarim Basin, the south slopes of the Tianshan Mountain, and its south part is just within the Taklimakan Desert. It borders Kyrghyz Republic and the Republic of Kazakhstan in the northwest. In the upper reaches of Tarim River, Aksu, which literally means "white water" in local Uygur language, belongs to aggraded valley plain with the main stream of Aksu River flowing through in the south of the city. Aksu Prefecture administrates 1 county-level city and 8 counties; of its 2.4 million inhabitants, 73% are Uyghur, 26% are Han, with the remainder belong to other 34 ethnicities. Enjoying an agreeable weather, Aksu has a thriving husbandry; it is known as "a graceful South Region beyond the Great Wall" and "a land flowing with milk and honey". With cotton, especially long-staple cotton, being the core product, it is further crowned as the Hometown of Cotton producing one third of the total cottons in Xijiang, and one eighth of the country. It is even A Land of Melons and Fruits, in particularly with national known productive read dates, apples, bergamot pears, grapes, muskmelons, and so on. More rare is, the city of Aksu is awarded with many a national titles, such as "national outstanding tourist city", China Habitat Environment Example, National Science and Technology Progress Model City…and what worth mentioning is the one "National Forest City", the title that only granted to Aksu (with 40.3% of forest cover) in the whole droughty Northwest China.

History of Aksu - a stop of the ancient Silk Road 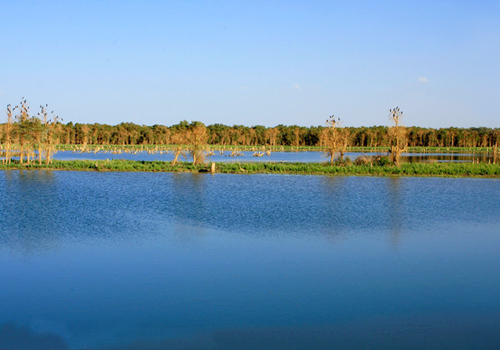 Early in Qin (221-206B.C.) and Han (202B.C.-220A.D.) dynasties, Aksu was called Gumo, which not to be used until Tang Dynasty (618-907). It is an important stop along the ancient Silk Road in Han Dynasty; furthermore, it is also the origin place of the Qiuci Culture (of Qiuci Kingdom, the content of which mostly referring to Buddhism) and Duolang Culture (of an ancient tribe lived around Taklimakan Desert). With exceptional sceneries, Aksu was hailed as South Region (synonymous with elegant beauty) Beyond the Great Wall as early in ancient. The eminent monk, Chinese pilgrim Xuanzang, (602-664, the greatest sutras translator in Chinese Buddhism), visited Aksu and described the "kingdom" and the thriving Buddhism in the area in his notes during his pilgrimage to India. Though the region frequently changed hands among Tang Dynasty, Tibetan Tubo Kingdom and the Uyghur Empire in the 7th, 8th and 9th centuries, Aksu was just positioned on a vital junction of the northern-Tarim trade route of Silk Road and the route north via the Muzart Pass of Tianshan Mountain to the fertile Ili River valley. 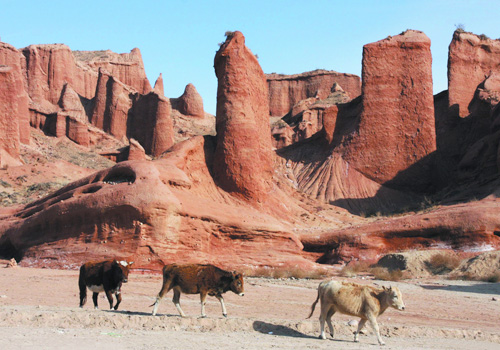 The time-honored history, splendid culture, full-bodied ethnic folk customs, and dainty natural beauty of Aksu make the city an important tourist city today in the whole southern area of Xinjiang Province. Here, tourists can find the second largest desert in the world- the huge Taklimakan Desert, the largest primitive Euphrates Poplars forest in China, the longest continental river in the country- the Tarim River, the imposing high peak of Tianshan Mountain- Pobedy Peak, the Global Geology Wonder- the Mysterious Great Canyon of Mount Tianshan, the amazing Yardang Landform in thousands of postures, alpine lakes and snow-topped peaks, etc. Apart from diversified natural scenery, the featured ethnic habits and customs of the "hometown of songs and dances" of Aksu is a great appeal to most tourists; furthermore, the profound historical and cultural relics and ruins are also the highlights of the region, such as, ruins of ancient cities, old castles and palaces, one of the four greatest cave temples- Kizil Thousand-Buddha Caves, beacon towers of Han Dynasty, ancient smelting sites….